Lifting the Veil of War

This story is really shocking in its possible implications.

Basically, two undercover British commandos ended up being detained in the Iraqi city of Basra. They were apparantly wearing local Arab clothing, but were driving a car full of weapons, ammo, explosives, and remote detonators. When confronted by Iraqi police, they shot and killed police and civilians and tried to get away. They were apprehended and jailed, but they were broken out by British tanks that smashed down the walls! It was really important to get these guys out of incarcaration! It's not like like they were being held by Al-Qaeda, they were in the hands of the authorities.

The disturbing possibility this situation reveals is that not all the car bombs and 'insurgent' attacks are perpetrated by Iraqis. When our American military is hit, you can be sure it is Iraqi fighters setting the bombs. However, this incident makes all attacks on civilians suspect, because now we see there could be a covert 'divide & conquer' strategy going on by the occupying forces.

The media is already spinning it as soldiers dressed in civilian clothes collecting information, but do you need all this weaponry and gear just to collect information? 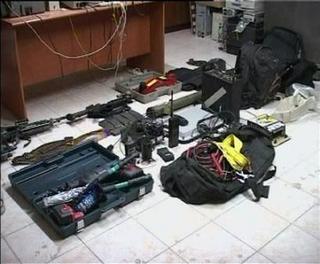