There is a likelihood that the strategy game I created, "Da Vinci's Challenge,"﻿ could be back on the market next year.

The game has an ancient theme, due to the long history of the Flower of Life symbol featured on the game board.
Despite this classic heritage, maybe one day it will be made into a sleek, high-tech version... by laser wielding robots!

That's the scenario I was imagining when making this addition to my 3D art gallery:

If there was one subject that I'd have to say is essential to understanding the reality we experience, it would be- Fractals.

Fractal geometry is the closest conceptual model we have to the recursive & endlessly detailed structure of our world.

This is a hypnotic animation I saw on Oerbital, of a particular fractal edge known as a Koch Snowflake.

Like all fractal animations, it's basically a 2.5 dimensional image- a flat picture, but with virtual "depth" that can be zoomed in & out in infinite, self-similar detail:

I saw this on fusion anomalog & it cracked me up.

This already-intelligent monkey's 'super brain' has produced an Evolution Accelerator:

It's Christmas time, marking the ending of yet another year.
Time to celebrate the rest of 2013!

Speaking of "magic", some interesting thoughts about the origins of Christmas


Inhabitat:
Santa and the 'Shrooms:
The Real Story Behind the "Design" of Christmas

The horrifying reason that Santa has a beard: 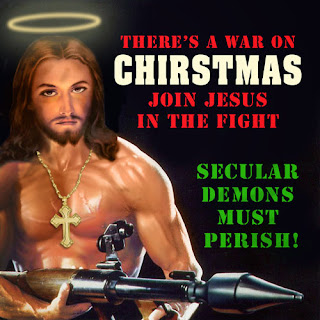 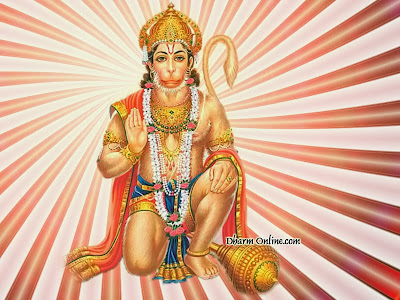 This is pretty funny-

After a monument featuring the 10 Commandments was placed on Oklahoma's state capitol grounds, Satan worshipers & also Hindu devotees of the monkey-god Hanuman are now petitioning to have their faiths represented, too.

This is what happens in America when you try to impose your religious ideology onto the rest of the public...

Every other religious group will (rightly) demand equal recognition under the law. This is not a Christian nation, despite the endless arguments from people who confuse their religious tradition with civic law. America is a country of secular government, but was founded on religious freedom & tolerance for all beliefs.

You can worship any damn thing you please - Jesus, Satan, Hanuman, The Flying Spaghetti Monster, etc. Just don't impose your reality tunnel on the rest of us. 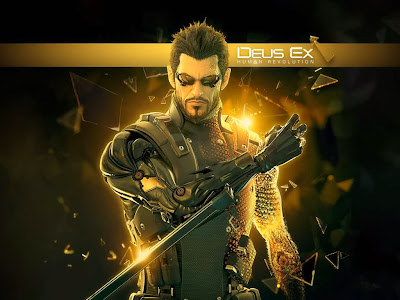 I recently finished "Deus Ex: Human Revolution". The concept & story was interesting enough to make it worthwhile for me, but in my opinion the actual game play could have been much better.

Deus Ex takes place in the near future, 2027, where humans are physically merging with machines to an unprecedented degree. People with cybernetic augmentations are called "Augs," and they have abilities that are unavailable to natural humans.

As a result of the inevitable socio-political tensions that arise from one group having an advantage over another, an anti-augmentation movement forms, called "Purity First".

Far from being a mindless waste of time, games like this can actually offer powerful commentary on ethical issues like human augmentation & the role of technology in our evolution. These are emerging problems that are already in the news, and we are going to have to deal with very soon.

io9:
The First Person in the World
to Become a Government-recognized Cyborg

New Scientist:
Cyborg tissue is half living cells, half electronics

Deus Ex is a 1st-person RPG shooter, so it has role-playing elements for the character interactions. Although I like the idea of influencing the story through the player's decisions, it was a little too much talking for my tastes. I've recently started the Mass Effect series, which also features alot of narrative and decision-making elements. It is much more seamless in that game experience, though. My main problem with that kind of interactivity is that I sit there trying to think of all the possible outcomes for any given choice of dialogue. Pondering these choices, combined with taking my time to look at all the visual elements, results in this kind of game taking me forever to play!

The setting of this game features futuristic locations such as Hengsha (Shanghai), where an upper metropolis level called "The Pangu" towers over the lower city. There is a predictable class division that results from this physical separation of the population.

Although the sci-fi look of the game is cool, the amber color that dominates most of the environments makes everything feel very bland & monotone overall. The city areas are much more open & engaging than the levels that are indoor corridors. The last level is an anti-climatic Arctic base that is mostly hallways. The enemies and firefights are pretty intense in those close quarters, though.

The main character is Adam Jensen, a security officer who got injured in a terrorist ambush. When he came out of his coma, he was augmented with military-grade cybernetic enhancements. He was given these implants & prosthetics by his employer, the biotech company Sarif Industries.

The character of Jensen is basically a clone of Neo from The Matrix- from his look to his voice. It's not too annoying, just not very original. He has all kinds of awesome powers to upgrade throughout the game resulting from his cyber-enhancements. He can increase his physical abilities, such as jumping over 9 ft. high, lifting heavy objects, and sprinting faster. There are also many sensory upgrades like being able to see through walls, targeting improvements, and stealth capabilities like cloaking.

My biggest criticism is one that applies to many games- even ones I really enjoy, like Assassin's Creed. By the time you have your character anywhere near to being fully leveled up... the game is over!!! Deus Ex has all these awesome augmented abilities for your character, but most of them aren't unlocked until the final chapters. Just as you are getting to enjoy these kick-ass superpowers, you realize there's not much game time left to use them.

Overall, it's a good game whose thought-provoking content & ideas about the future of humanity held my attention more than the mediocre game play or its spotty action. 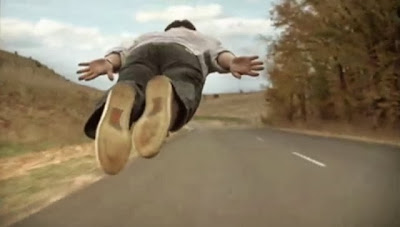 Last weekend, I took a nice afternoon nap, & had a dream where I was flying.

Luckily, I've trained myself to remember my dreams. I've experienced 'dream flight' several times before, & each time it's like riding a bike. It feels a little weird at first, as you get used to mentally propelling yourself off the ground. Then, you can go higher & faster until you're soaring into the atmosphere.. if you can handle it.

This dream took place at my parents' house. There was a BBQ in the backyard, with a lot of family & friends there. I suddenly realized that I was in a dream & able to fly. I was showing the kids how I was hovering by propelling invisible energy out of my hands, like Iron Man. Then,

I started flying up at the tops of the trees around the house. I was baffled, though, because nobody there seemed too impressed that I was doing this amazing feat! I decided to leave the party, so I started flying away really fast, straight through the trees in the woods... & that's the last thing I remember.


*On a related note, I was reading a Reddit post about the idea that your mind is processing crazy scenarios all throughout your sleep, but the dreams that you remember are basically quickly compiled in the process of waking up.
Posted by paul_mic at 8:17 AM No comments:

Welcome to the Internet

If you are new to the The Internet, have no fear!

Your helpful guide to surfing the Virtual Universe has arrived... 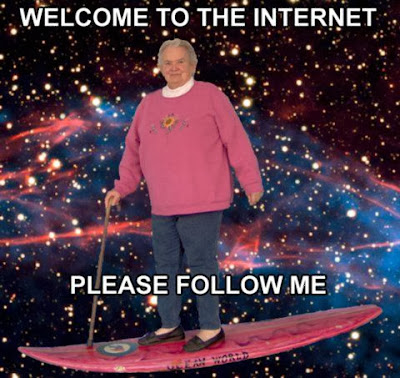 "Welcome to the Internet,
Please Follow Me."
Posted by paul_mic at 8:00 AM No comments: 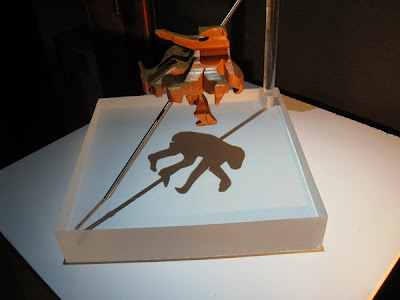 On io9, I saw this video of a 3D sculpture that can be rotated to form different shadows.

The artist is J. V. Muntean & this particular shadow sculpture, Evolution 1, can be rotated three ways to show the development of man from an ape-like creature.

These ingenious constructions can be seen as a metaphor- for the idea that the changing forms we see in the world around us are only slices of higher-dimensional space.

Like Plato's "Allegory of the Cave", our senses can't directly perceive these higher forms. We only experience the "shadows" they project into our awareness in 3D space.

I can't resist a gallery of funny monkey pics, This one is from The Chive:

As a professional designer, I've learned that the most important thing is to give the client what they want. Luckily, most of the clients I've dealt with have enough experience & good taste to make decent design decisions.

Sometimes, the client's requests can clash with the artist's vision for a design. One of the challenges of graphic art is to incorporate everything requested, while making it all look good.

I've also learned NOT to show concepts that I really hate as an option- because that will inevitably be the one that is chosen!

I can definitely relate to this comic strip by Jesie Castro, showing the danger of trying to use reverse psychology in the design process. I saw it posted on the hilarious website Clients from Hell: The Oatmeal:
How a Web Design Goes Straight to Hell

Recently, Hubble Telescope added another image to it's amazing collection. This is the Messier 15 star cluster, one of the densest areas of stellar bodies yet discovered.

Looking into this photo of millions of stars, that are billions of years old, is like gazing directly into infinity... 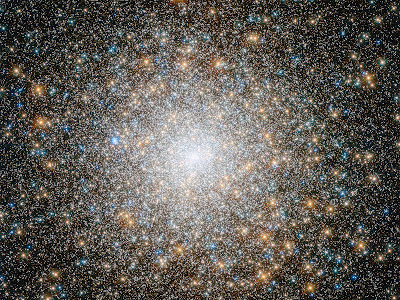 I've added another image to my online gallery of 3D art:

This scene shows a crystal-clear sky temple, containing a pristine gold relic in the shape of a star tetrahedron.

This is a sacred geometric figure- a 3D version of the religious symbol known as the "Star of David" or the "Seal of Solomon".