"The War of the Worlds" Cover Designs

The War of the Worlds - Book Cover Collection

Although I'm fortunate to have a job with a high creative output, I am also a passive sponge for the infinite world of design & visual information. Therefore, it's like finding a treasure trove when I come across something like this awesome gallery of cover art from a century of "The War of the Worlds" editions.
The whole collection is filled with art inspired by a story of technology, war, space, and the fear and wonder of our own fragile situation in the universe. There are so many cool covers, but here are a few that I think are really great for really different reasons: 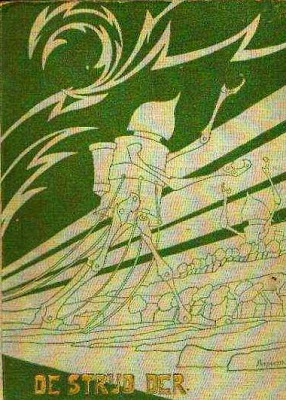 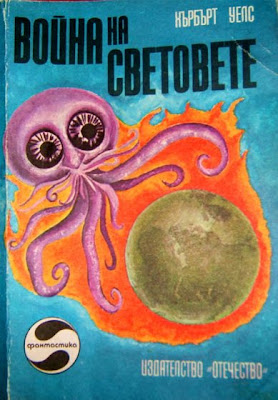 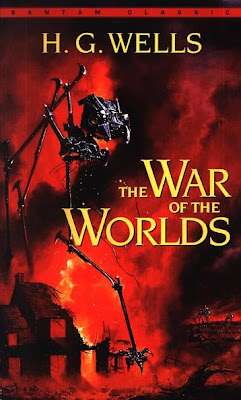 As if the imminent Robot Wars weren't bad enough to add to the state of global chaos...

Now it seems that monkeys in India (who obviously haven't realized their Monkey Buddha nature) are engaging in vicious attacks that are being answered with bigger monkeys, trained by humans! Here's the article BoingBoing linked to:

Of course, the invasions of Afghanistan & Iraq could also be considered "The Monkey Wars"- 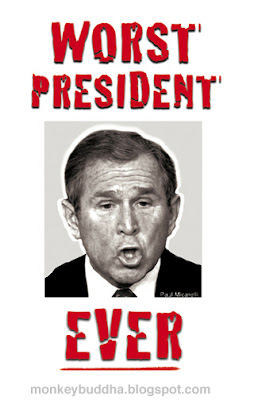 Tonight Comedy Central has had a lineup of the hands-down funniest shows ever created. The multi-episode "Imagination Land" South Park story is the craziest TV possible, with appearances by the multitude of characters. The cast of Imagination Land's esteemed Council of Nine is hysterical by itself: The Narnia Lion, Morpheus from the Matrix, Popeye, Jesus, Wonder Woman, Zeus, Gandalf, ummm.. Luke Skywalker, hmmmm, c'mon memory... &... someone else. Anyway, Sarah Silverman's Program is living up to her stand-up & real-life sense of humor. Then there's the greatest show pairing ever, The Daily Show and Presidential Candidate Stephen Colbert. Comedy Central has put together an awesome night of programming.

The really revolutionary aspect of all these shows, though, is the unfettered creative freedom to express the craziest and most taboo human ideas and experiences. By revealing the absurdities of the human condition, great comedy frees the soul by breaking down the psychic confines of the thought structure known as the ego.

This is definitely a golden age of artistic expression. As a professional artist, the infinite sea of creative novelty engulfing the human race can be overwhelming to consider. I mean, how can you come up with something more original than a fat little asshole like Cartman freezing himself so he can awake when the Wii is released, but goes too far into the future & is captured by various science-worshiping factions including a race of intelligent otters?!?! 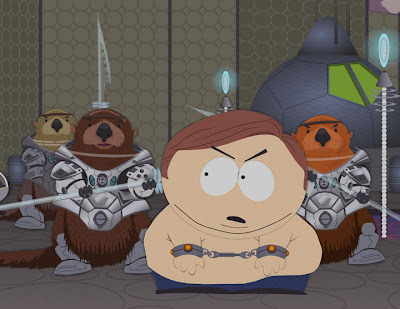 My friend Dan forwards me some wacked out stuff, but this might take the cake. I can't help but post this madness for posterity & my own amusement.

The Weng-Weng Rap had a certain amount of coolness to it. However this music video is nothing but crazy. I actually wasted a few seconds of my life and read some commentary about the negative racial & gender implications of this apparently highly-controversial piece. My argument would be that this video is as offensive as a whoopie cushion. It is so silly and laughably insane that it makes the human species as a whole look stupid... which makes it great.

Regardless, I would not get near this maniac, or anything that 'it' was cooking! Where the hell are these kids' parents at?!?!

"Fry That Chicken" by 'Ms. Peachez'
(...who appears to be a chicken-crazed
ghetto transvestite of some sort). 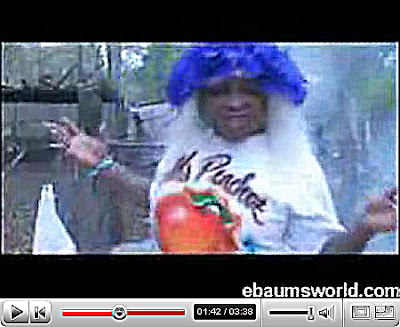 Oh well - turn up the bass, grab a drumstick,
and get down with Ms. Peachez! 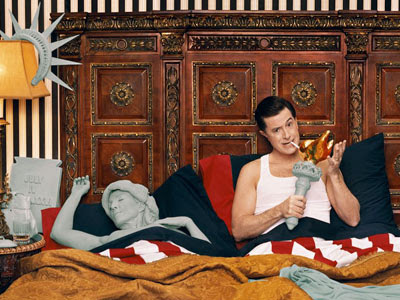 Sorry Dennis Kucinich & Ron Paul, but my true ideal candidate has parted the pool of contenders- like a modern political Moses.

Stephen Colbert for President
I was watching the Daily Show, & Stephen Colbert announced... the possibility... of choosing.. whether or not... to run for President. 15 minutes later, on his own show, he made the big announcement. Although I would rather have an insightful artist/satirist as a leader than a corrupt politician/CEO/lawyer, some are wondering "can he take the heat?"

I think he should really campaign as a write-in & win the whole goddamn thing. Unfortunately, like Howard Stern's failed bid for Governor of NY, I don't think the brilliant comedic mind of Stephen Colbert is destined to lead us into a 'truthier' future from the Oval Office, which is currently being used as a monkey cage.

Speaking of Stephen Colbert & The Monkey:

A few months ago I posted about the coming Machine Wars that threaten the very future of humanity. I was horrified, but not surprised, to find that the size and scope of the Cyber Army is expanding to the point of no return. God help us all. No, really... HELP!!!

As an exercise in complete futility,
I am going to link again to Asimov's Three Laws of Robotics.

washingtonpost.com
"Dragonfly or Insect Spy?
Scientists at Work on Robobugs." 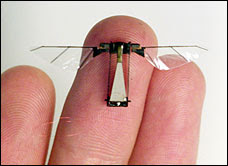 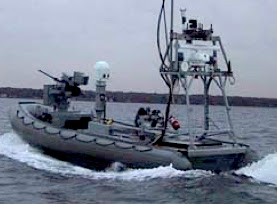 Data Backup for the Apocalypse

The one thing that's always bothered me about keeping a blog is the impermanence of the media.

In the event of a much-anticipated Armageddon / End Times / Singularity, the work of millions of people would disappear. Perhaps we are in the process of developing a Hall of Records type depository where the recorded thought patterns of humanity can be stored.

I saw this on boingboing & thought that it's as good a start as any.

Nuclear Hardened Data Center
Of course, in the face of a cosmic cataclysm, such precautions (along with the rest of the entire human legacy) will be erased like a drawing in the sand.

If things become so bad where this type of backup is needed, people aren't really going to be worried about screwing with computers...

Taking graphics to a lighter side, I thought this T-shirt graphic was funny.

One sign of great art is a maximum amount of meaning packed into the design. Looking at this collection of spoilers uncompresses the vast amount of info that these movies contain. Even though I'm not an avid movie-goer I can figure most of these out. 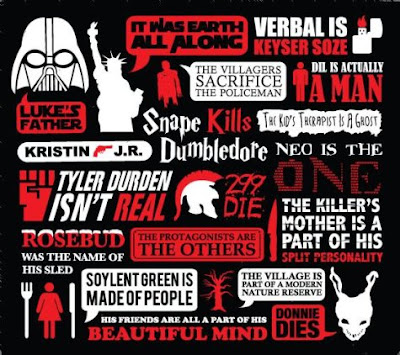 "Death & Taxes" is a visual representation of how our tax money is allocated by Congress.

Being the militaristic empire that rest of the world has learned to despise, half of our tax dollars are put toward the "Defense" Department... where valuable resources & bright people's minds are wasted finding new ways to murder other human beings. 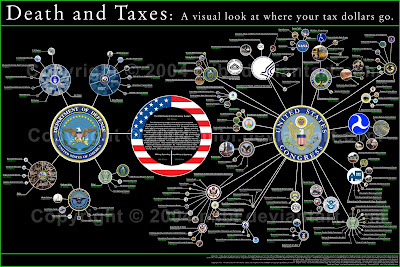 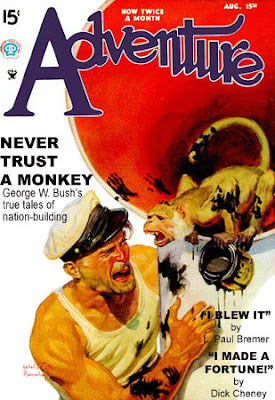 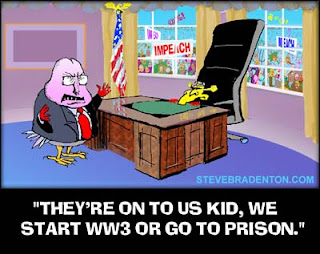 I saw this graphic on Bartcop.com. I thought it perfectly summed up the danger humanity faces from having America's 2 criminal madmen backed into a corner & looking for another murdering spree to try distracting the world from their horrific misdeeds.
"Making the Same Mistake Twice"

There's only one remedy for the terminal cancer that is the Bush Administration, and the only doctor pushing an effective cure is Dr. Kucinich:

I thought this was pretty funny. What messages would be in the email inbox of 'God'? (in this case, the personification of the Judeo-Christian deity called Yahweh or Jehova)

Personally, I would mark everything as 'Spam' and take a nap for several billion years. Actually, that may explain our current situation... 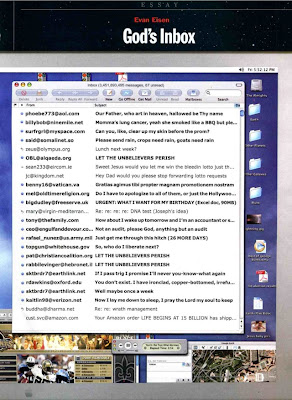 It's strange how a discipline, such as art, can change so drastically over time. My major technical concern is learning creative software & techniques. During the design process, I don't usually have to deal with materials other than my screen & printer. Back in the day, though, the creative process was much more of a pain in the ass. From making your own pigments and brushes, to simply not having access to the most revolutionary information tool ever created, the Internet. Just looking at the trouble monks had to go through to make ink is much more than my lazy ass would feel like dealing with. Although new media have been developed in recent times, art through the ages has always expressed the endless potential of the human mind.
Monastic Ink:
Linking Chemistry & History
Scholars Give Us Antiquity -
the Colorized Version
Thank goodness I'm living in the age of decadent electronic devices... The only problem would be if some kind of cosmic electromagnetic catastrophe were to destroy all electronic media, alot of my work would instantly disappear. My only consolation is that the rest of the world be wallowing in analog-only hell with me. One thing I'm pretty sure will outlast me is the original stone & metal version of Da Vinci's Challenge I made as a senior design student. Working on that project made me really respect the integrity of the materials & the people who are experts at working with them.

Well, it takes alot to really shock me, but my mind has been officially blown.
I've pondered the vast perplexing nature of reality from nanostructures to cosmic cycles, but nothing could prepare me for the personal paradox that faced me a little while ago when Jenna Bush popped up on my TV screen talking to Larry King -

Because it's almost unbearable for me to watch her father The War Monkey speak for more than 30 seconds, I must say I was stunned to find Jenna Bush to be completely captivating & authentic.
Has the bad karma simply run out in the Bush bloodline?!?

Although I always thought Barbara was much hotter, I always recognized both the Bush twins for at least being very good-looking. In her interview, though, Jenna came across as articulate, compassionate, and very insightful. My brain could not wrap around the sheer absurdity of there being a Bush that I find really likable. Just thinking about it gives me a headache. I will go on record, though, as saying that I would seriously yank out Dubya & put Jenna in the Oval Office instead. Right now. (I'd be fine with a damn monkey in there instead, so it's not saying much- but still...) 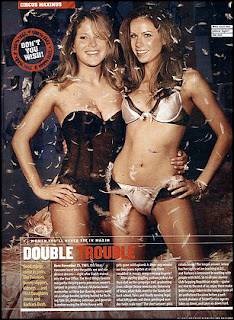 I Love You, Weng Weng

Of course, these lyrics may seem absurd at first glance,
but you cannot watch this video and not want to sing it. 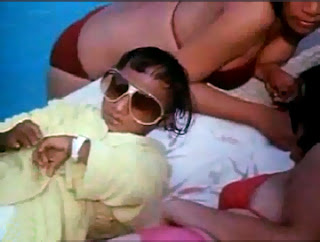