In TRUMP We Trust

I've been a fool... After the election of President DONALD J. TRUMP, our strong, wise, benevolent, compassionate, & courageous Leader, I wasn't able to recognize what a divine blessing he was to the United States of America.

However, I recently realized that he is, in fact, the perfect Leader for this country! I now see that his amazing traits perfectly embody this wonderful nation of ours:

These are all qualities that patriotic Americans, especially my right-wing countrymen, have been cultivating in this country for a long time. Finally, someone embodying all these characteristics has emerged as the true face of the USA, and all that it truly stands for!

It is a travesty that President TRUMP has been mired in scandals over that silly concept of "ethics", while his loyal supporters have been indicted of crimes clearly made up by the "Deep State". The fact that so many of his people in his circle are being accused of criminal activity shows that The Establishment is against him... & definitely NOT that he is a vile, corrupt piece of shit and a stupid, incompetent criminal himself!

I have come to the conclusion that the only way to protect our Leader from these fake attempts at maintaining law & order is to make him "PRESIDENT FOR LIFE". In fact, the TRUMP name is the only name that should grace the Presidency from now on... Ivanka will inherit the office after her father is no longer able to hold it, then perhaps Barron will then be next in line. With the grace of God, the TRUMP family will rule over America for generations!

To anticipate this NEW TRUMP ORDER™, I created the picture below, showing President-For-Life TRUMP in his full leadership regalia. He is surrounded by the re-designed American flag, featuring the beautiful new gold colors & majestic "T". To prevent any mischief or harm against our Leader, he is flanked by his armored TRUMP-TROOPERS™ who will not hesitate to kill or viciously maim anyone who speaks out against or disrespects our Leader.

Let us hope that our nation comes to its senses and realizes that only TRUMP speaks the Trump-Truth™, and that he alone is the answer to ALL the problems we face as a country. 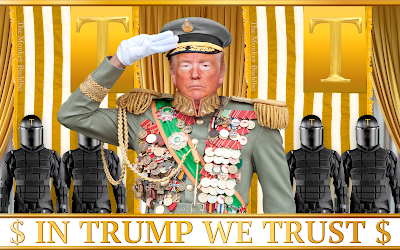