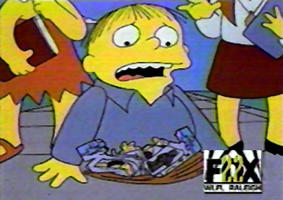 The (sometimes) Subtle Wit of "The Simpsons"

Principal Skinner: "Mr. Burns, what is the secret to your success?"
Mr. Burns: "Family, religion, and friends...
...these are the three demons you must slay if you wish to succeed in business."

Chief Wiggum: "Ralphie is so incredible, the special schools are all over him."

Homer: "I'm not normally a religious man, but if you're up there... save me Superman!"

Homer: "Alcohol, the cause of, and solution to, all of life's problems."

Saleswoman: "...this is the first toy made for children, by children, with all profits going to children."
Lisa: "Really"
Saleswoman: "Well we're all somebody's children!"

Reverend Lovejoy (in a sermon about the 'Movementarians'): "This so called new religion is nothing but a pack of weird rituals and chants designed to take away the money of fools. Let us say the Lord's prayer 40 times, but first let's pass the collection plate."

Guess what? There is none!!!

Faith, tough talk, and hope are nice...
but strategy, planning, and some sort of grasp of reality are much more effective.
Posted by paul_mic at 7:23 PM No comments:

The Art of War

"The Art of War" by legendary Chinese general Sun-Tzu is the classic source of military strategy, written 2,400 years ago. All I'll say is.. read these excerpts, and you might grasp the insane incompetence of the people who created and are now running this physically-impossible and illogical "War on Terror," and the Iraq occupation.

"War is a matter of vital importance to the state; a matter of life or death, the road to either survival or ruin."

"All war is based on deception."

"A sovereign cannot launch a war because he is enraged or resentful. For while an angered man may again be happy, and a resentful man may again be pleased, a state that has perished cannot be restored, nor can the dead be brought back to life. Therefore, the enlightened ruler is prudent and is warned against rash action, thus the state is kept secure and the army is preserved."

"If troops are attacking cities, their strength will be exhausted. When the army engages in extended campaigns, the resources of the state will be depleted. When your weapons are dulled, your strength exhausted, and treasure spent, the leaders of the neighboring states will take advantage of your crisis to act. In that case, no man, however wise, will be able to avert the disastrous consequences that will occur."

"There has never been a prolonged war which benefited a country."

"Treat the prisoners of war good and care for them."

"In war the best policy is to take a state intact; to ruin it is inferior to this."

"To win one-hundred battles is not the ultimate skill. To subdue the enemy without fighting is the supreme excellence."

"Know the enemy and know yourself;
in a hundred battles you will never be defeated."

"An army which fights in the hope of winning, but without any planning, is destined to be defeated."

"Those skilled in war cultivate their policies and strictly adhere to the laws and regulations."

"He who occupies the field of battle first and awaits his enemy is at ease; He who comes later to the scene and rushes into the fight becomes weary."

"It is a doctrine of war to avoid presuming that the enemy will not attack, but rather to make oneself invincible."

"In war, numbers alone do not guarantee an advantage."

"When the general is morally weak and without authority, when his instructions and guidance are not enlightened, when there are no consistent rules to guide the officers and men, the result is disorganization."

"To achieve a uniform level of valor relies on a good military administration." 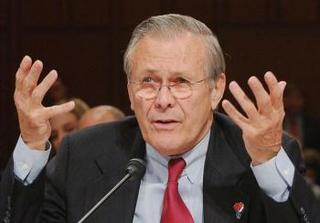 "What in the hell is a 'Sun-Tzu'?
Gee wiz, everyone knows
Hermann Goering is my man!!!"
Posted by paul_mic at 5:36 PM No comments:

Link to story on www.canada.com

That is why they are called The Greatest Generation...
because they know how to stand up to fascists!!!

It must be torture for a vet like Bill, who risked so much for this country, to sit there and listen to jingoistic BS about war and sacrifice from the most incompetent pretend Commander-in-Chief ever to be installed by the Supreme Court. How can anyone not cover their ears at this point?
Posted by paul_mic at 9:05 PM No comments:

From both a graphic and psychological standpoint,
this blog is a moving and intense thing to experience:
http://postsecret.blogspot.com/

It is a blog made up of postcards that people send in
revealing some secret that they cannot share elsewhere.

Disturbing, shocking, funny, weird, sad...
these are a few words that can only begin to describe this site.
Posted by paul_mic at 6:05 PM No comments:

With increasing criticism of the Bush Administration for about a million different reasons, and the pressure on the Israeli government because of Ariel Sharon's decision to pull his settlers out of the Gaza Strip, I get more and more nervous each day that these fools will do something crazy in an attempt to restore a post 9-11 sense of control.

To me, the absolute worst-case scenario is that something happens to Bush, and Cheney puts the country on lock down and retaliates against a chosen target nation(s).

This is another nightmare situation that is scary because of how possible it is.
We may have just had a close encounter with the above situation.
(Imagine if a missed rocket attack drives up oil prices 3%, what will happen if we attack Iran or Venezuela?)

The reality is, Dick Cheney and his buddy, Prime Minister Sharon, have already been gearing up for such a scenario.

Here is a report from the Christian Science Monitor.

Hopefully a higher public awareness of what these guys are doing will diffuse any destructive plans that are being created. I think if there is another major "terror attack" in the US soon, 2 things could happen.
1) Police State, international panic and fear, another invasion of an oil-rich country that is a threat to Israel (ie. exactly what the Bush/Cheney administration want)... or
2) The American people finally see through the Al-Qaeda "ooga-booga!" fear-mongering and demand accountability from our leaders for their disasterous foreign & domestic policies. 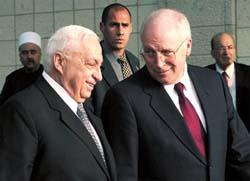 World-class Gangsters
Posted by paul_mic at 11:45 AM No comments: 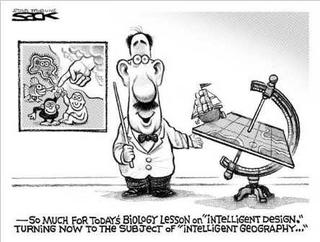 Gravity Replaced with "Intelligent Falling" -parody from The Onion

...You may be suprised, though, to learn that I actually don't agree with the idea of "evolution!"

Here's my take:
"Natural Selection" is an observable, factual process.
Living things mutate over time, and given enough time, can morph into completely different forms.
This is directly seen in a lab with fruit flies & microorganisms, and in nature through the fossil record.

On the other hand:
"Evolution" is a subjective, and therefore unprovable word & theory.
When you say "evolution" it implies that life now is better than anything that has come before.
It also suggests that all the mutations and adaptations throughout time are on a steadily improving slope.
That is a judgement call based on what you think "better" means, and makes for a shaky scientific term.

As for "Intelligent Design," there is obviously underlying order and observable patterns in our universe. That is one of the subtle lessons of Da Vinci's Challenge and the idea of Sacred Geometry. The more you study the Golden Mean, Fractals, Quantum Physics, and Sacred Geometry, the deeper your awareness of the amazing complexity and connectivity of the world becomes.

The problem for me is crediting a personal deity or supernatural "intelligence" for it. I prefer to think of "God" as the infinite order and creative energy of the universe. This is the unknowable ALL in ONE which has no name, gender, or personality. It has no reasons, no meanings, and no "designs" that human beings can begin to comprehend. It will always amuse me how mere mortals claim that God is The Great Unknowable Mystery, yet they also claim to know so much about "Him" and what "He" wants.

The important thing to remember is that when scientists, priests, or even know-it-all graphic designers talk,
all they are really saying is this.

I have been completely dumbfounded by the positive response and interest Da Vinci's Challenge is generating.

It won **7** major awards in the toy industry in less than 6 months after it's release!
I'm glad people are discovering the unique depth of this concept.

• The first award was from Mensa's Mind Games competition,
where 5 games out of about 50 are chosen after a weekend-long tournament:
http://mindgames.us.mensa.org/ (choose "2005" from the menu)
http://boardgames.about.com/

• DVC was picked for the Oppenheim Toy Portfolio Gold Award, a pretty important recognition. We just found out we also won the Platinum Award, their highest, which means DVC will be one of the toys & games featured in a TV segment (the Today show, I think) in September!!!
Toy Portfolio: Games
It will also be featured in their 2006 book:
http://www.amazon.com/

• Parent's Choice Award, one that will definitely help it sell:
http://www.parents-choice.org/

• iParenting Media Award, never heard of it until now...(about) :
http://iparentingmediaawards.com/

Eschaton.com
is one of the most popular online political blogs-
& I got a nice free plug for Da Vinci's Challenge!

Check out the Eschaton.com post
about my logo design & Da Vinci's Challenge!!!

Duncan Black, aka Atrios,
is a former economist from Philly who writes the blog.
He is on the forefront of the emerging internet media
that is revolutionizing politics, news, and public discourse.

He's been making big news lately with all the talk about
the growing importance of blogs & the web as new media.
A Philadelphia Magazine article about Atrios from last year
An article about blogs in the Philly Inquirer

• I was thrilled to check my email & see he chose a logo I designed & sent him for his website!
• I was floored to see that, in return, he gave Da Vinci's Challenge a post with a link!!!

This is big deal to me because Eschaton has a large readership which is smart, critically-thinking and a great source of positive word of mouth for DV'sC. When I clicked on his site meter, it showed 60,000+ visitors to his website on that day!

The logo I designed is at the very top of the webpage, and looks pretty cool, I must say. ;-)
Posted by paul_mic at 7:56 PM 3 comments: