I got back Sunday night from a trip to Mexico with my family, and it was the best experience of my life. Eight of us went down to the Riviera Maya area on the coast of the Yucatan and stayed at the Sunscape Puerto Aventuras resort.

Here is a picture of me on the beach where I swam, drank Corona, and ate grilled food every day! 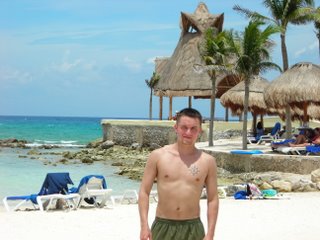 The most amazing part of the trip was our adventure to the Mayan ruins of Chichen Itza in the middle of the Yucatan . My brother-in-law drove us all in a mini-van, which was a unique opportunity to see the Mayan Mexican people's lifestyle (especially after making a temporary wrong turn, and heading into the village of Coba). The Mayan people are so friendly and proud of their culture, it never stops bothering me that they and other people throughout the world often live in poverty, trying to get by, when they have such great hearts and minds. We had an open, wonderfully talkative Mayan driver take us back to the airport, and I could hear as he talked to us the deep feelings they have about the Spanish Conquest, foreign tourists, and their status as almost second-class citizens. He seemed to think the Mayans were considered unattractive because of their indigenous features, but I think they are beautiful people, like the rest of the human race.
The ruins themselves were mind-boggling. I read voraciously about ancient cultures and the Mayans are one of the most fascinating peoples to me. The first thing you see as you head through the entrance/vistor's center into the Great Plaza is the overwhelming Pyramid of Kukulcan, or Quetzalcoatl to the Aztecs. He is symbolized by the feathered serpent - the union of the heavens with the earth. The pyramid is a monument that contains vast astrological & symbolic information.
It also has an amazing acoustic quality: when you clap your hands in front of one of the four staircases, the echo is the chirp of the sacred quetzal bird! We were dumbstruck at the technical knowledge required to achieve this effect. They must have understood a correlation between the waveform of the bird's chirp and the distance & angle between each step.

Here are some pictures of me initiating myself into the Mayan priesthood at the base of the pyramid: 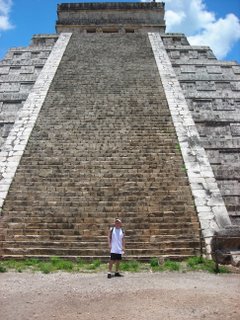 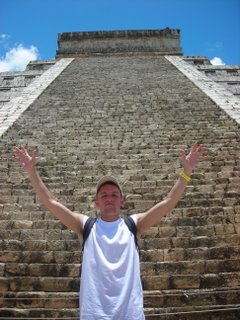 I can't even get into...
• the drunken insanity that took place on the trip me, my brother, and brother-in-law took to Playa del Carmen's "Mambo Cafe" one night with a group from the hotel (we got left behind and had to get a cab back) • my brother getting as sick as I've ever seen a human being the night before we left into our flight the next day • smoking Cubans on the balcony overlooking the ocean • etc, etc, etc 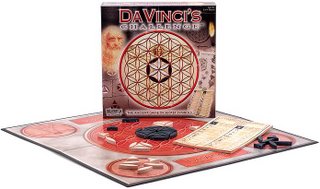 Nikola Tesla was the inventor of AC electricity and a genius who was like a human incarnation of electro-magnetic theory. He claimed it was possible to create and transmit wireless electricity. Tesla made Thomas Edison look like a chump but was kind of forgotten by the world at large because he wasn't a great businessman. Here is a short but eloquent statement on war & peace:

"What we now want is closer contact and better understanding
between individuals and communities all over the earth,

and the elimination of egoism and pride
which is always prone to plunge the world
into primeval barbarism and strife...

Peace can only come as a natural consequence
of universal enlightenment...''

An Eye (and Mouth) for Art

I think this photo is hysterical! This is pure human nature with no guilt or fear of judgement, which is why it brings a smile to your face.
If I saw this happening in person, I would probably fall on the floor laughing. 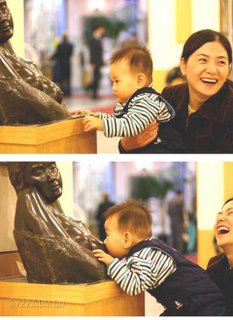 Future 'Breast Man'
Posted by paul_mic at 9:33 PM No comments:

Check out these sand scuptures of scenes from the Star Wars movies. 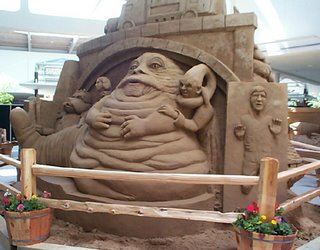