It's crazy how busy it gets when you have children... Working full time & having a toddler sucks all the time from my day, but I'm grateful to have such a full life.

I realized I haven't posted in a month, so I thought I'd share a proud dad moment.

Anyone who knows me or has followed this blog knows I'm a lifelong Star Wars fan. Recently, right around Star Wars Day (May 4th) my son Paulie took his "first step into a larger world".

First of all, I made the mistake of bringing home an electronic Darth Vader bank from my parents' house.

You push a button and Vader lights up, talks, & moves while blasting The Imperial March. Well, my son has become completely obsessed with this thing. He has already worn out 3 sets of batteries from activating it over & over (....& over & over) again. Sometimes he'll push the button 20+ times in a row. My poor wife is so sick of it, she's ready to Force choke someone out. I never thought I would need a break from hearing The Imperial March, but here we are...

He was playing the thing so damn much, I had to give him a Darth Vader action figure just so that he would leave the bank alone & eat dinner. 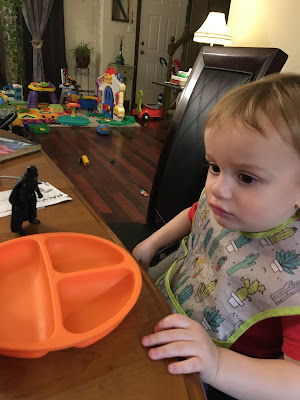 Now, he loves watching videos with Vader from the films or Star Wars Kids animations. He also says "Vay-er" in the car until I play The Imperial March through the stereo.

Since he has seen clips of lightsaber duels, I've begun his Jedi padawan training - with an intro to lightsaber combat. He seems to prefer the Jedi lightsabers, while I use the double-edged Darth Maul one. So, even though he is enthralled by The Dark Lord of the Sith, he prefers Jedi weapons. He's a strong little guy, so he wields the toy swords pretty handily.

Really, his first exposure to Star Wars was Yoda & Grogu "Baby Yoda". He still loves these characters, mimicking my imitation of Yoda's laugh "Hmmm-hmm-hmm" & continuously watching the Lego Star Wars video of Grogu in the snow to the point where he knows each part of it. His grandmother gave him a Baby Yoda doll that he was carrying around all day today. 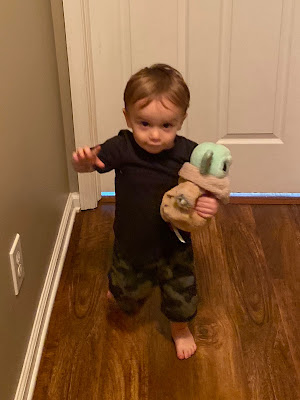 I made another big mistake of showing him a Darth Vader case in his closet, that's full of Star Wars figures, that I was saving for when he is old enough to play with them. Now, he goes to his closet, pointing up to the case & saying "Vay-er" until I take it down. I'm letting him look through them and play with them, but putting them back so he doesn't lose them.

So being such a huge Star Wars fan, it's pretty cool that my son loves it so much already. It's fun to watch video clips online with him, and I can't wait until he's old enough to watch the movies & series with me. Hopefully he embraces the Light Side, and doesn't follow Vader into the ways of the Sith...