This is a really cool poster design I saw on OMG Posters, made to promote an art gallery in Oklahoma.

It combines Buddhist iconography & a cosmic backdrop with a techno-futuristic theme reminiscent of the pods in The Matrix. 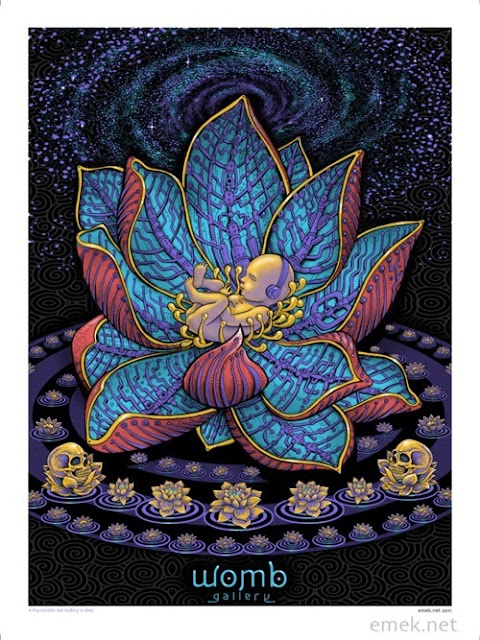 I am not a morning person.

When I was in high school, I would start my homework around 10PM & be up past midnight. My room was on the 2nd floor, & after midnight my Mom would tap a baseball bat on the ceiling below me to signal me to go to sleep. Then, the next morning, I would hear her banging it on the ceiling to wake me up for school at an ungodly hour. I guess I've always been more of a night owl.

I'm trying to be more positive now about waking up in the morning, but I do love to sleep. I saw some funny pictures about the joy of awakening I'm posting below.

This great comparison, featuring Neo being jarred from The Matrix dreamworld, was on the Chive: 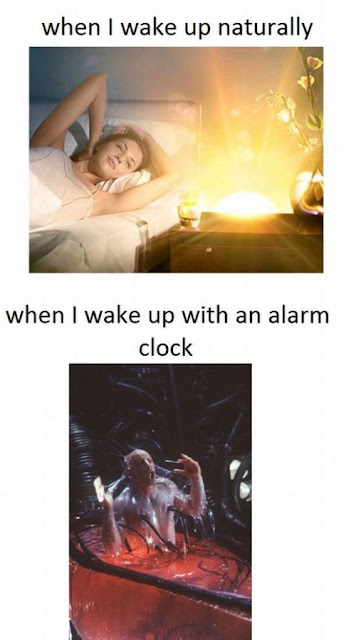 I also saw the funny poster below from a series featured on VisualNews.com: 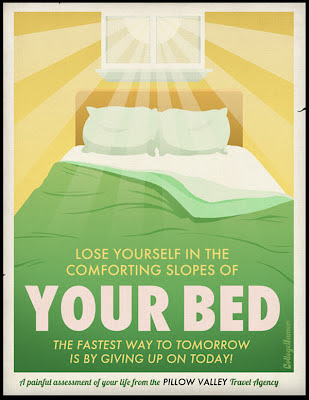 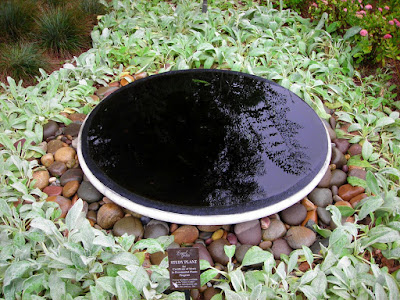 Discovering the Zen mode of thought when I was a college student had a great impact on my personal understanding of the world. This approach to understanding reality felt immediately familiar to me, since I've always had an introspective, but iconoclastic, personality.

Essentially, Zen is a mindset in which names, preconceptions, and even the appearance of physical reality are all recognized as constructions of the lightshow within the mind. It doesn't mean that there's no "reality", but that reality as we experience it is extremely limited and even further filtered through our senses & perceptions. One benefit of looking deeply into one's own existence is to be "comfortable in your own skin" and understand our part in the universe.

I have Daily Zen as my homepage to randomly generate quotes from masters & practitioners.


This particular quote sums up the philosophy & practice very well:

"To study the Way
whether moving or still,
is nothing more or less
than becoming quite intimate
with our own nature,
resting quite easy in our natural state."
Posted by paul_mic at 5:36 PM No comments:

What People Think Graphic Designers Do

This is a funny take on people's perceptions of graphic designers: 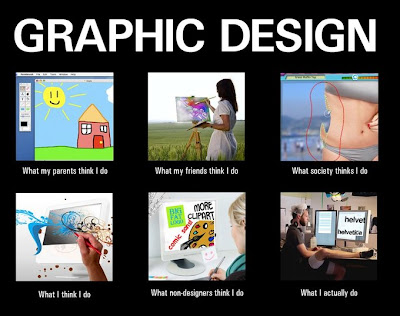 Despite following political news closely, I haven't felt the need to comment alot on the presidential race lately. The GOP primaries have basically been a ridiculous mess.

I've been saying all along that Mitt Romney's going to be the nominee after the clown show is over. Having become the exclusive party of plutocrats, obviously the Republican with the most money will be the nominee... & Mitt's got plenty of $$$. However, I can't believe that he would ultimately pose a serious challenge to Obama unless something crazy happens before the election. For reasons that almost everyone on the Left AND the Right have already been pointing out, Romney is a horrible candidate. The average non-millionaire American would have to be a complete fool to want that robotic vulture capitalist running the country.

There's obviously plenty of things to criticize, but I think Obama's presidency has been generally good. He's an intelligent guy, & consistently shows clear understanding of the complexity of the many heady issues facing our country. After watching years of Dubya bullshit his way through his 8 disastrous years, it's a relief to think someone is dealing with things who isn't a total jackass.

Though I don't think the Republican party is going away anytime soon, it's leaders & spokespeople seem to be doing their very best to alienate as many voters as possible this election season.

On top of all the other nuttiness coming from that side of the aisle on both the state & national level, the House GOP just released their latest re-hash of their warped financial vision for America.

As usual, they are fully prepared to slash the social safety net & let the corporate sharks in to prey on the population. Suprise!... they want to screw the disadvantaged- while awarding tax breaks for millionaires & multinational corporations. Who would've guessed?!?

Being "fiscally conservative" to these people means you want to save money for rich people & defense contractors by cutting services for the poor & sick. I fully agree many health & social programs need to be seriously reformed, but the right wingers are ready to just slash & burn.

I went back to an old post & found this pic from the last time Rep. Paul Ryan proposed his party's crappy ideas: 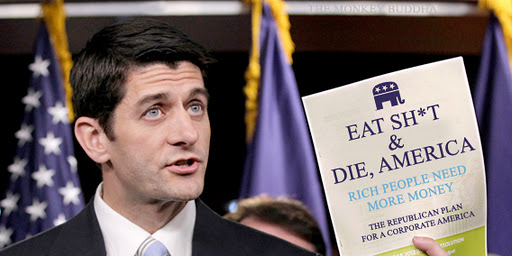 Always make sure to read the fine print...

Thinkprogress:
The 5 Worst Things About The House GOP’s Budget

Secrets of the Stones: Decoding Ireland's Lost Past 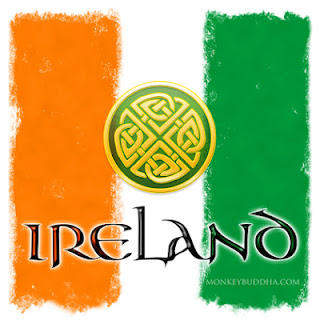 Although I have an Italian last name, 3 of my grandparents were Irish, so I enjoy celebrating my Celtic heritage on St. Patrick's Day.

Before I load up on Irish stew & Guinness, though, I wanted to post this excellent video I saw that explores the rich ancient heritage of Éire.

The documentary is from the Irish public broadcasting station, RTÉ. The video is an hour long, but worth watching if you're interested in Irish history.


RTÉ Television:
Secrets of the Stones:
Decoding Ireland's Lost Past

The Origin of The Monkey Buddha 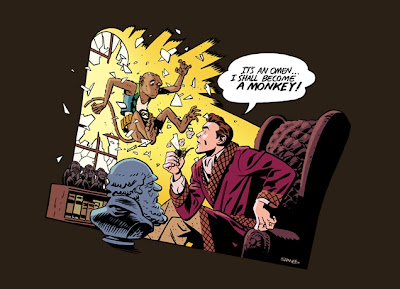 I saw this awesome Batman-inspired graphic on Superpunch, where the iconic bat is replaced with a monkey, smashing through the window.

The amazing thing is that this is exactly what happened to me when I started The Monkey Buddha blog!

I'll never forget that fateful day, sitting quietly in my study....
Posted by paul_mic at 7:08 AM No comments: 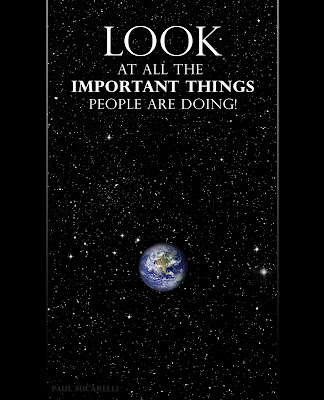 "LOOK
AT ALL THE
IMPORTANT THINGS
PEOPLE ARE DOING!"

There's always ideas for crazy graphics popping into my head. I try to write down or sketch some of them before I forget.

Though it may seem kind of cynical or defeatist, this particular cosmic image isn't just meant to disparage the relatively futile, but necessary, efforts of mankind.

It's mostly meant as a reflection on the extremely narrow limits of our mortal perspective.
The reason people & society dwell on so many petty, absurd things is because it's easy to completely lose sight of the larger reality of our world and the vast universe.

If we could truly accept our fragile existence on this island planet, we could focus on the things that would improve that existence for everyone.
We can't transcend our limitations unless we recognize them first.

With the emergence of the global brain we call the Internet, the human race is beginning to self-examine & hopefully overcome the many fundamental problems we face.
The biggest problem we face, in the long term, is how to escape this little blue ball and survive beyond it.

*To buy a print or poster, please visit my Cafepress store:

To counteract the bad Star Wars news, I have to mention this big gallery of conceptual art for Star Wars-related products and promotional items.

I've seen this linked on several websites, but here's the post by designer Jason Geyer describing the process:

Almost all of the concepts were rejected... which is usually the case in any commercial design process.
Some of the ideas are cool, but some are pretty bad.

However, as someone with limited product design experience, I can appreciate the effort involved in coming up with such a wide variety of concepts & the time it took to illustrate them all.

I bet most Star Wars fans would appreciate the Gurgling Gungans squeeze ball: 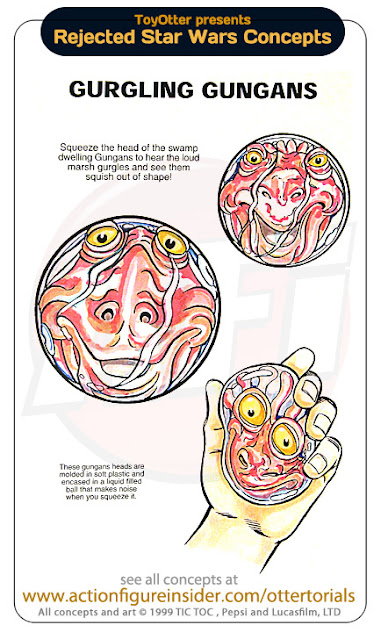 The Vision of Ralph McQuarrie

I'm an unabashed Star Wars geek. The legendary story George Lucas created has been an inspiring influence on me & every generation since its release, around the time I was born.

The original movies owe much of their design & visual appeal to the creative abilities of artist Ralph McQuarrie.

This visionary recently passed away, but the saga he helped develop will continue to inspire people of all ages for quite some time.
Not only did he create the look of the Star Wars universe, but he also helped with the production of many other hit movies, like Raiders of the Lost Ark, E.T., and Jurassic Park.

Here are some galleries of Ralph McQuarrie's art for the Star Wars movies (with better thumbnails than the un-viewable, tiny thumbnails on the artist's site).

The Empire Strike Back

Return of the Jedi

There is a slide show gallery of large images at StarWars.com:

Jesus & A Monkey on Mars

I was reading an article about the landscape of Mars on io9 & someone posted this picture in the comments: 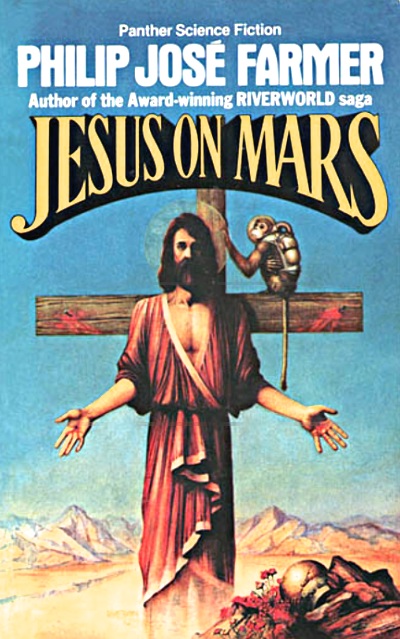 I don't know why Jesus would be on Mars,
nor do I know why he would be accompanied by a spacesuited monkey.

However, I DO know that this book cover is crazy & awesome.