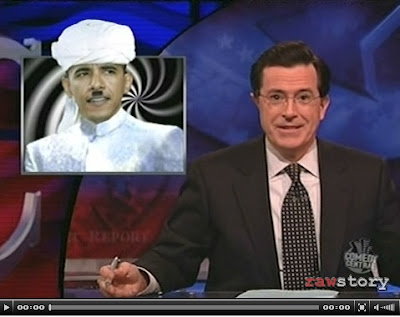 Well, the long-legged mack daddy Barack Hussein Obama has certainly made quite a commotion with his nomination for President.

The American media is very proud of themselves, apparently because someone is actually (!!!) running for President that is only half white! Amazing, simply AMAZING!!!

The level of excitement on TV actually surprised me. A couple friends watching it with me aren't really into politics & thought it was a great speech. It was really good, but I always look at things & think how I could do them better.

In my opinion, Obama should have hammered McCain, Bush, and the whole Neocon approach to politics much, much harder. There are so many injustices and failures in judgment that have wasted unimaginable resources and potential. Barack did give some good jabs, but the Republicans are going to go to town like blood-hungry jackals next week. The idealism is nice and all, but this is competition for the lives of millions and there are substantial risks to a McCain presidency. 'Sigh', maybe I just read Bartcop.com too much...

In any case, the cynical realist in me hopes that Americans are prepared to have their collective dreams crushed in one way or another. As long as the Sith master, Dick Cheney, roams the halls of power, no one is safe. 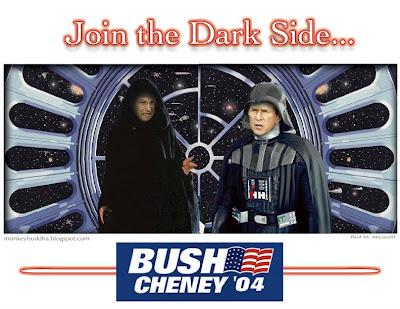 Saw this video on iambored.com, & I now officially declare Reverend Alicia to be a High Priestess of Monkey Buddhism. Watch and feel the blessings flow as this mystical woman accesses the power of the infinite fractal energy matrix known as God.

The Archbishop of Monkey Buddhism is obviously the Master of "Crazy Person Theology" himself, the Insane Preacher from "One Man Show". I see that he actually has an entry in that amazing tool, Wikipedia: "The Spirit of Truth".

We live in a time of changing paradigms, and we desperately need the wisest of spiritual advisors to guide us... 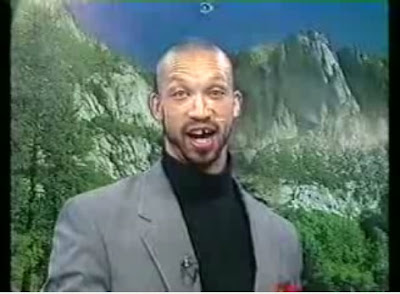 Regarding the People's Glorious Olympics 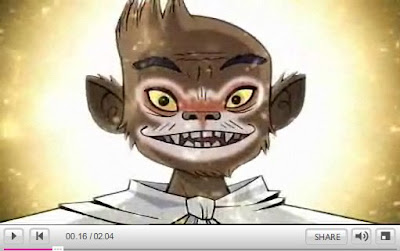 BBC Sport's: Olympics Monkey
I have only the bare minimal interest in anything that is happening with the Olympics. My life is too busy right now to really pay any attention, other than that the guy with ADHD won like 100 swimming medals. Actually, I was watching the race where Michael Phelps beat out the snooty Frenchman by a fingertip & that was pretty cool. Mostly, though, because I was in a bar with my friends eating wings & drinking beer.

There are improvements that the Olympics need to really draw me in. The most obvious winner would be the inclusion of "Monkey Games". Some visionary genius already realized the greatness of such a spectacle:

I was getting ready to go to bed & I checked an email my friend Dan sent me. He sent me a link to this video that is just weird. It's probably going to make me have some wacked-out dream tonight.

I'm not sure if this is funny, disturbing, retarded, awesome, or all the above.

"Life itself is only a vision, a dream."

Looking at a video my friend sent me, I saw a link to this claymation style video labeled as "creepy kids cartoon".

Reading the comments, I saw that it was based on a Mark Twain story, "The Mysterious Stranger".

I found a longer version of the video with better sound quality:


The segment is from the kids movie "The Adventures of Mark Twain".

The dark, existential ending reminded me of Radiohead's House of Cards video that I just posted about.

"It is all a dream -
a grotesque and foolish dream.
Nothing exists but you.
And you are but a thought -
a vagrant thought,
a useless thought,
a homeless thought, wandering forlorn
among the empty eternities!"
Posted by paul_mic at 11:53 PM 1 comment: 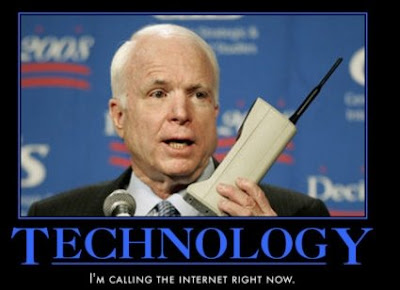 Radiohead has a very unique sound & always pushes the boundaries of creativity. Artists often can pioneer in new techniques outside their realm of expertise, & Radiohead is well-known for exploring new artistic territory.

For their video, "House of Cards", all the imagery was created by capturing laser scans of people and landscapes. This information was stored as data and used to construct 3D video out of bits of data. Besides being a haunting song, the video makes it even more interesting.

When I look at the group of data points that appears to be Thom Yorke's face, it's strange how so much of what we consider our identity is information and numbers floating around. This is more true every day in the Digital Age, where people are known by their avatars and other abstractions.

This song and the video also illustrate the transient nature of all reality. Like all things we experience, the forms we see as 'faces' and 'places' have no permanent nature, and exist only in our own mind. We are taking a bunch of dots and perceiving images based on previous patterns that we associate with. The question is, what is the glue that is binding these countless dots into a coherent mental image?


The best part of this multimedia experiment is the interactive visualizer on the Google Labs website. You can take a clip from the video and manipulate the data/image in 3D space. They even supply the code for people to create their own video visualizations.

I saw these monkeys capturing human styles originally on trendhunter.com.
They originate from a studio in the Ukraine called Atelier, which might mean "Workshop".

Clothing is mostly used to display our personality, in both obvious & subtle ways.

As a consequence, seeing fashion styles on monkeys gives them "personas" that we project onto them, using people we've experienced wearing the same things as a reference.

Most of all, I just think monkeys in people clothes are hilarious!

The funniest picture is the Rasta monkey.
The most disturbing one, though, is the neo-Nazi skinhead ape.

"The Workshop
Making a Monkey Out of Fashion" 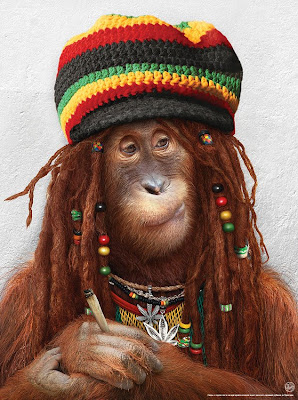 I've never really been a fan of Paris Hilton. However, the last couple stunts she's pulled have been really amusing to me.

The idea of having actor Maxie Santillan act as her "spiritual guru" in front of the paparazzi was a great goof. I always wonder why celebrities don't do more stuff like that. 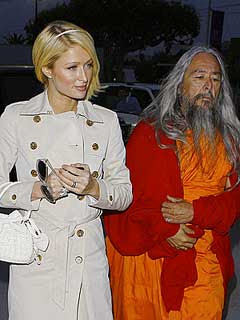 Anyway, John McCain made his "Barack is a Celebrity" campaign ad w/ Paris & Britney Spears in it. Kathy Hilton basically responded by stating the obvious - that the ad is stupid (even for a political ad) & it's a waste of time and money. However, her mom defending her daughter in this way wasn't really surprising.

I was watching CNN a couple nights ago and saw the video response that Paris filmed. I was feeling to lazy to post about it then. The video gave me a good laugh & like everything else Paris does, it was at the top of the news the next day. It's kind of surreal to watch Paris Hilton call both Candidates for the President of the United States "bitches", but we are living in a time of warped realities. I love every minute of it.

The creator of the "rebuttal" video put it well,
"McCain made one huge mistake: He drifted into the world of pop culture. And that's Paris' world. She owns that world."

The funniest thing is that McSame was shown up by the most vapid of the celebrities that he was trying to trivialize. If John McCain can be outfoxed by Paris Hilton, how are we supposed to expect him to successfully engage hostile leaders & terrorist masterminds?!?

Finally, for what it's worth (nothing), I can say I would 1,000% rather have even Paris Hilton running the country than Dick Cheney & his monkey boy.