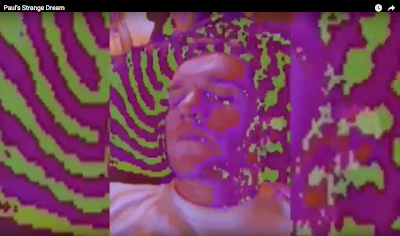 This is footage of an evening nap that led to my consciousness briefly slipping into higher dimensions...

I took the video a few years ago, but I finally got around editing this crazy clip & creating a music track in Garageband.

There is another "Strange" video & also a short nature video I've put together in the last couple days that I will be uploading, as well. 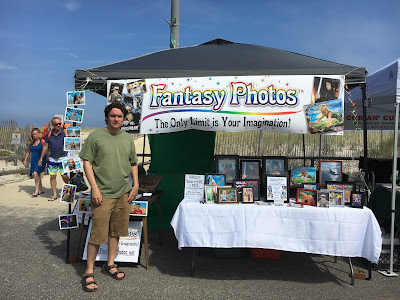 Last weekend, I was registered as a vendor for Sea Isle City's Skimmer Festival. I was promoting my new business, Fantasy Photos.

For live events or parties, guests can get their photo taken at the "Fantasy Photo Booth" and replace the background with a scene of their choice.

There's more info and examples on the website (along with social media links):

There were thousands of people at the Skimmer Festival, and my spot was right next to a beach entrance. I feel my booth gets a very good response from most people. I'm hoping it's an effective way to reach a large number of people.

I've done a few of these events now, & I feel like each one is a chance to improve and learn in some way.

Recently, my Dad & I took an afternoon to put together a simple 4.5ft shelf, to display a second row of framed pictures on my table. 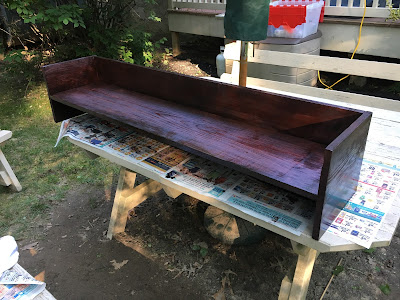 My next objective is to make a folding plywood booth, to enclose the green screen for the "Fantasy Photo Booth".

There are at least a few more events I want to attend this summer, and I'd like to continue doing these shows to promote my business. It's fun meeting new people & talking to them about their ideas. It's a great feeling to be able to stimulate other people's imaginations. I've had a vision for what I want "Fantasy Photos" to be, and I've been doing my best to make it happen. The customers I've already had are all happy, and that's what's important.

Here are some photos of my booth at the Skimmer Festival: 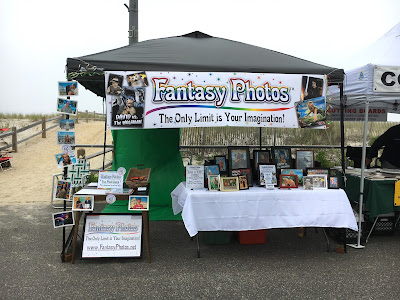 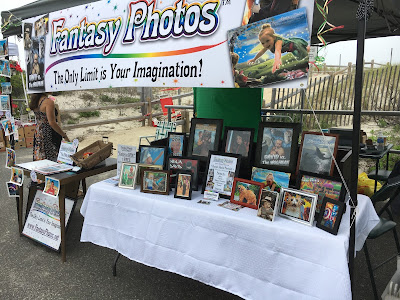 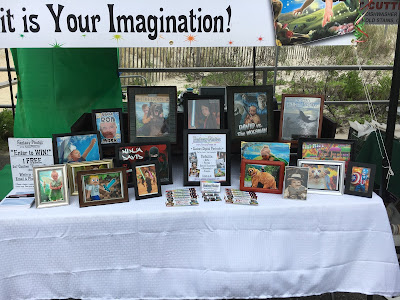 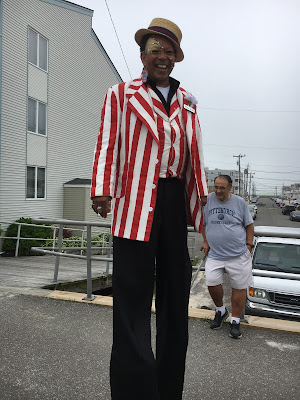 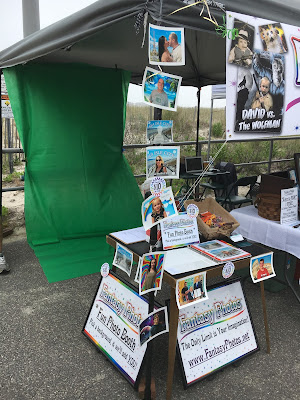 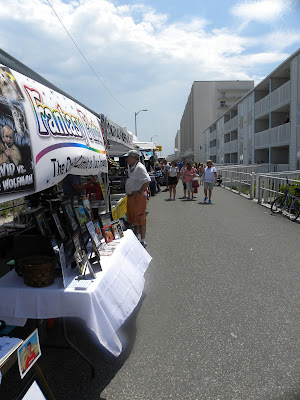 A view of the Sea Isle City boardwalk.
Posted by paul_mic at 10:58 AM No comments:

Before his retirement last year, he worked hard in the food retail business all his life. When he would get a chance to sit down & relax, it usually turns into a snoozefest. Family events or holidays inevitably become napping opportunities for the big guy.

My old friend Dan J. gave me the idea- to have pictures of my Dad sleeping right through important times in history. I thought this idea was hysterical & created this series of "snapshots" showing Big Paul experiencing historic events, in his own special way.

This is the seventh set of of "History Adventures," as he sleeps his way through the most important events in history.

To commemorate my Dad's birthday & Father's Day, I made the 3 new History Adventures below. 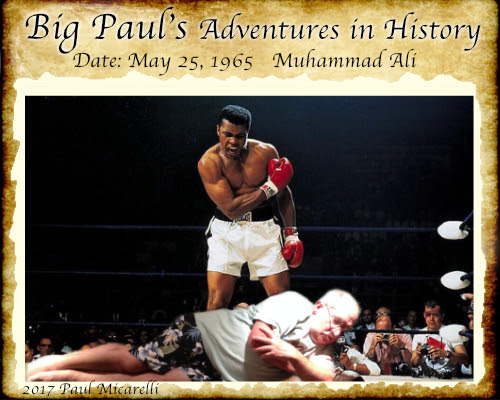 "Big Paul's Adventures in History"
Muhammad Ali
The Champ yells at Big Paul to get up,
but he was knocked out before the fight even began! 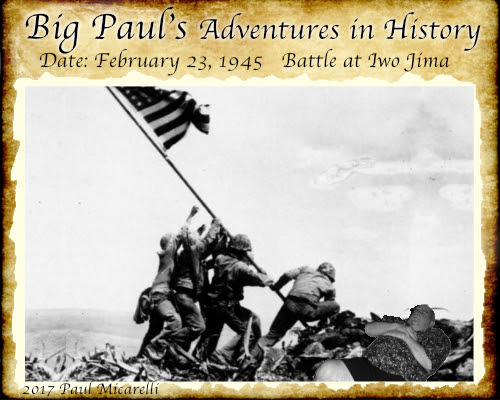 "Big Paul's Adventures in History"
Battle at Iwo Jima
Marines raise the American flag,
amazed that someone could sleep through the battle. 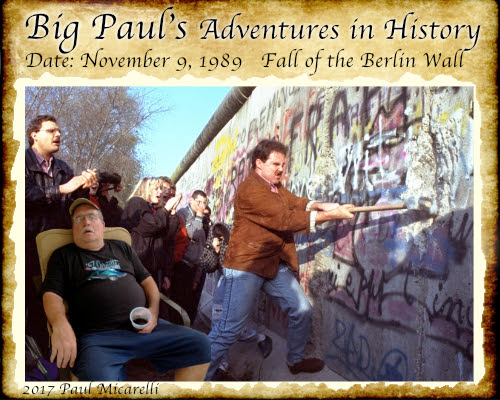 "Big Paul's Adventures in History"
Fall of the Berlin Wall
The sledgehammers, smashing the symbol of Communist oppression,
were completely drowned out by the sound of Big Paul snoring.

I've taken cool spider photos before, and I recently took some that make a fine addition to my collection.

Last week I was talking on the phone & stopped dead in my tracks when I saw a large thin-legged wolf spider on my parents' kitchen floor. I was like, "Woooah! Ok I gotta go, there's a big spider on the floor." A lot of people would just kill it, but the nature photographer in me always wants to take a picture. After abruptly ending the phone call, I slowly moved in as close as I could & took a photo before catching it. 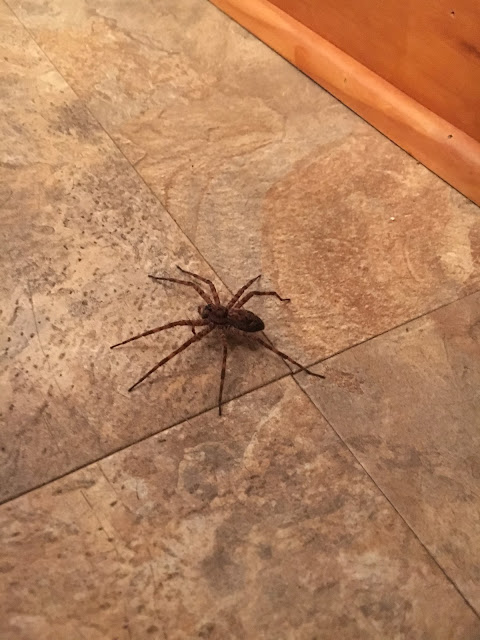 After catching it in a bowl, I took some more pictures that were clearer. Spiders are really interesting creatures. Most people have a ingrained fear of them, but I try to get past that automatic response and look a little closer at the nature of the living organism. After getting a few photos, I let it go in the woods to live the rest of its spider life. 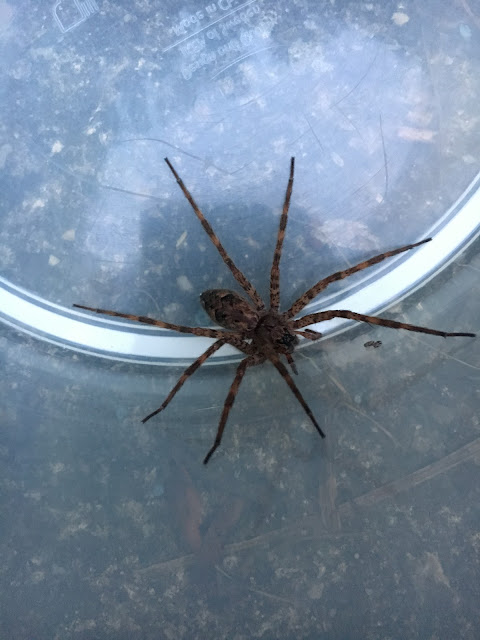 My hand for size. 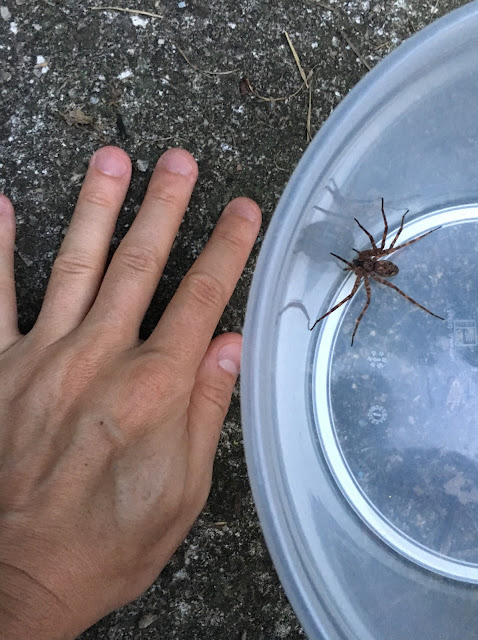 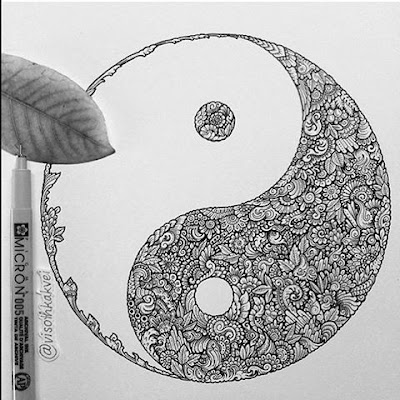 I've been seeing some excellent artists on Instagram. It's awesome how much creative talent is out there in the world.

When every page of my sketchbook is full of nature, I'd always want to get lost in it. Would you?
A post shared by Visothkakvei (@visothkakvei) on May 30, 2017 at 4:42am PDT

I was helping my parents lay mulch in their garden beds, when I came across this toad with a dark color. He blended in well with the dirt & leaves on the ground.

It was staying pretty still, so I crept up on it and got some close up pics to add to my album: 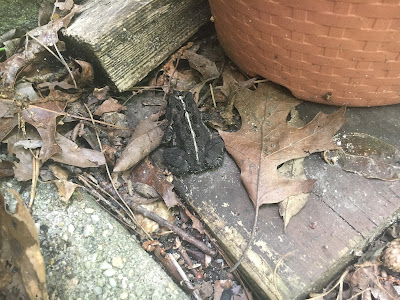 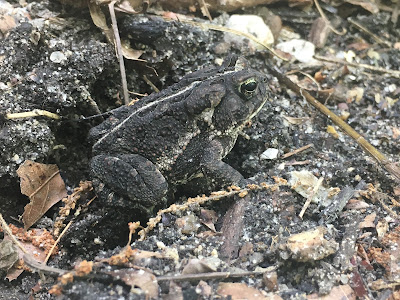 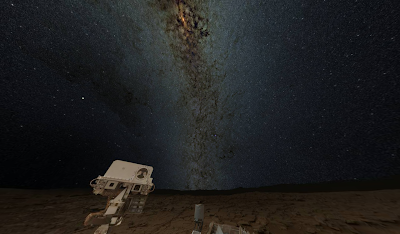 On r/space I saw this cool high-resolution VR panorama of the Mars landscape. You can look around 360º and see the environment of another planet in virtual reality, thanks to the Curiosity rover.

In the comments, there is a link to an even more amazing view from the martian surface at night. Without the light pollution we are accustomed to in Earth's populated areas, it is possible to see the full majesty of the Milky Way and the countless stars in the visible Universe.

I think if more people were able to witness the mind-blowing expanse of space & its stellar inhabitants, it would greatly shift our perspective of our place in the cosmos. We would realize the infinite scale of Reality and the relatively tiny, brief, & fragile nature of our individual selves.

Mars Panorama - Curiosity rover: Martian night
Posted by paul_mic at 11:12 AM No comments:

I love the spring, when Winter is ending and life is blooming in the natural world.

In April, I took a bunch of photos in my Mom's gardens around my parents' house. I captured the leaves beginning to burst from the trees, and the flowers blooming with insects on some of them.

I'll post a few here, and check out the rest in my photo album: 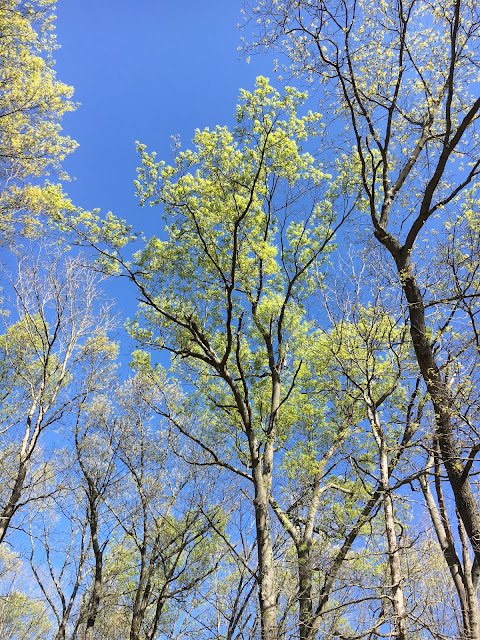 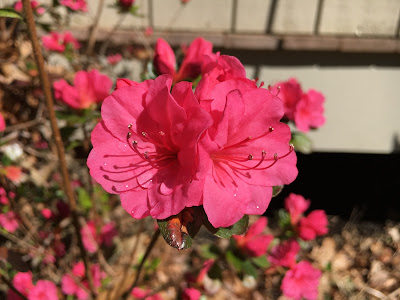 After I took this photo, I realized there was a little green insect on the flower: 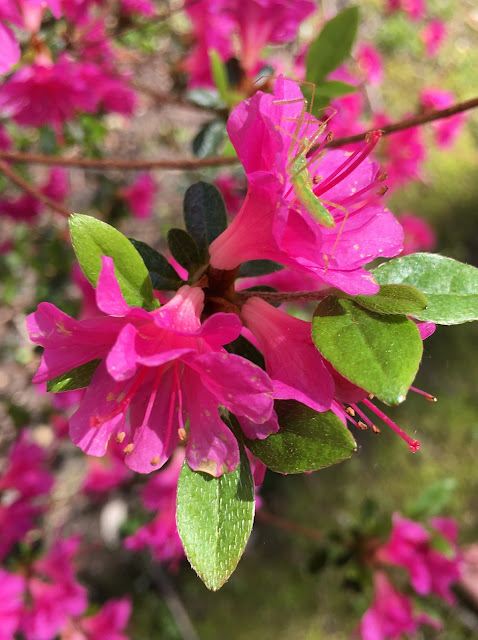 I caught this bumblebee feeding on a flower's nectar: 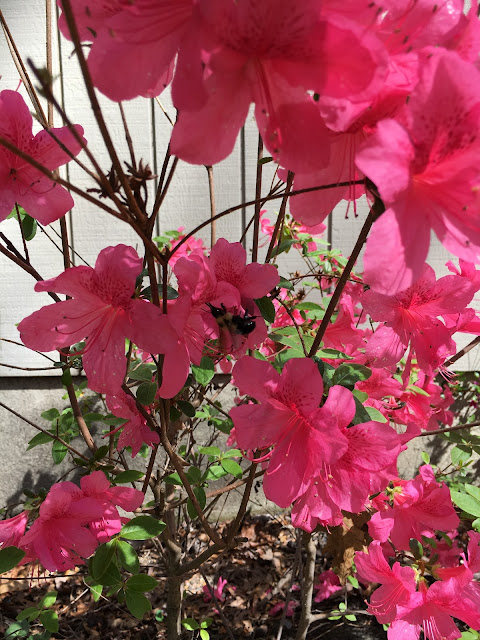 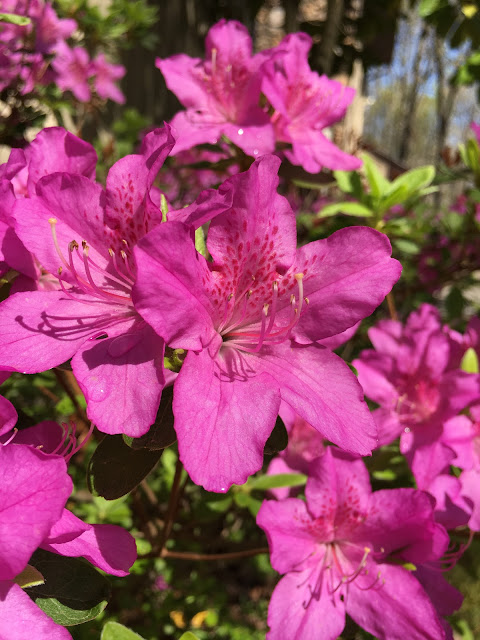 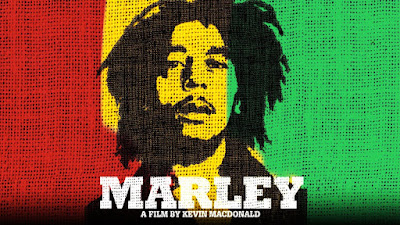 Last night I started "Marley", a documentary on the life of reggae artist & musical legend, Bob Marley. I'm only half-way through it, but it is an excellent film on a true visionary. I was watching on Comcast OnDemand, but you can watch the full movie here.


He is one of my favorite musicians, and I can listen to his songs anytime and never get tired of them. He has so many great songs that speak to the beauty and unity of the human race. There is often the aspect of universal love or recognition of the simple things in life, that comes from a deep appreciation for existence. 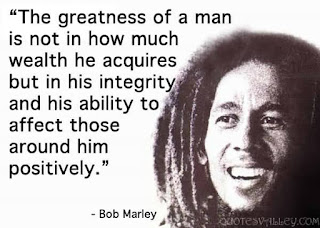 I knew that Bob Marley grew up in the island country of Jamaica, obviously, but I didn't realize the poverty he experienced in his home village and in the Trench Town slums in Kingston. This struggle, along with the identity issues from being of mixed race, led to the profound expression of his soul that came out through his music.

The film delves into his practice of Rastafari, which is based off The Bible but is uniquely Jamaican. Personally, I can identify with the concepts of Jah as an all-encompassing entity, the idea of a corrupt Western society as the modern "Babylon", and the emphasis on intuitive realization of spiritual truth. However, the idea that a single man (in this case Ethiopian emperor Haile Selaisse) is the embodiment or prophet of Jah is as misguided as any other cult of personality.

The story of Bob Marley's journey to become a world-famous musician is amazing and inspiring. He has bought so much joy and so many good vibes to people around the world. His revolutionary & mystic creativity will undoubtedly have a lasting effect on humanity.

I would highly recommend this documentary to anyone who loves Bob Marley or music, in general.

It's almost impossible to narrow it down to even a handful, but here are some of my favorite songs by the Legend himself:


Finally, this one makes me think of my fiancé (who was watching the documentary with me). She made me wait for awhile, but thankfully it was not in vain :)