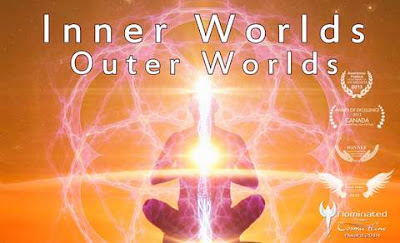 Last week my wife & I watched a film that we both thought was excellent, called Inner Worlds, Outer Worlds. Links to the full movie are on the website:

It explores many of our interests in science, philosophy, mysticism, & understanding the nature of reality.

The division between the outer world of "The Universe" and the inner world of "The Mind" is a totally fabricated distinction. Similarly, I don't think science and spirituality have to be mutually exclusive endeavors.

In truth, there is a continuum of the fundamental vibratory field that manifests into all phenomena. It permeates through us and everything else. Physical, energetic, and mental are all different aspects of the source field.

The visual imagery used in the film is beautiful and inspiring in itself. It is a treat for the eyes, ears, mind, and soul.

I would highly recommend it for anyone with an open mind about the world in which we exist, and the mind through which we experience its infinite facets. 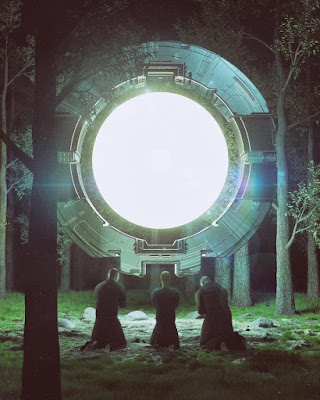 I have posted about CGI artist Mike Winkelmann, aka "Beeple" who completely confounds my mind with his abilities and productivity.

Beeple has made a piece of computer art every single day for over a decade. The amazing thing is that it is rarely crap, & in fact, his work is usually pretty awesome. His everyday images range from sublime, to technically impressive, to completely sick & twisted. Along with Alex Grey, he is one of my favorite contemporary artists.

This video lets us see Beeple in action, and he is like an insanely talented Bill Gates with a sailor mouth.

The Flower of Life in "Assassin's Creed: Origins"

I am currently playing "Assassin's Creed: Origins" and it is a virtual journey through time that is taking me months, at the rate I play video games nowadays. Having played most of the other titles in the Assassin's Creed series, this one is just as amazing. Because I have so little time to spend gaming, I only choose titles that I know are going to be worth it.

All of the Assassin's Creed games take place in different time periods, and the level of research and immersion that goes into the stories and visuals just blows my mind. "Origins" takes place in Ptolemaic Egypt, right before the birth of Jesus.

I will give a full review & an album of my in-game snapshots once I finish the main story, but there was a cool tidbit I wanted to share now...

Back in college, I created a strategy game called "Da Vinci's Challenge" that is based on The Flower of Life, an ancient symbol that is part of a system called sacred geometry. This is the study of geometric and mathematical properties that have mystical or profound qualities that hint at the patterns defining reality.


As I was playing Origins, I entered a bathhouse as part of a mission, and began to explore (as I find myself doing in every other part of the game). There were mosaic floors that were part of the intricately detailed decorations in the building. I was pleasantly surprised to see that a section of The Flower of Life pattern was used in the floors of the baths. 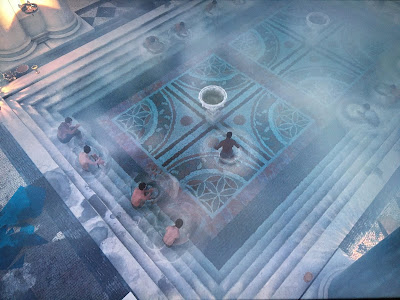 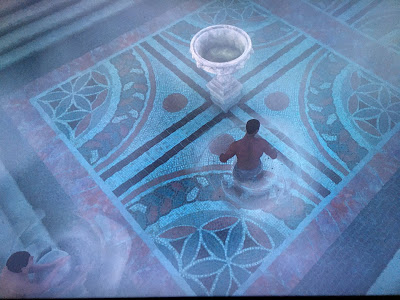 Then, I walked into a side chamber to see a more complete Flower of Life symbol, formed in the mosaic floor tiles: 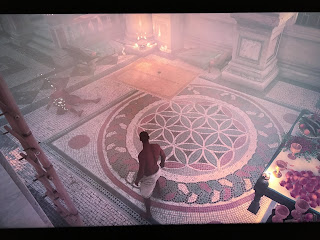 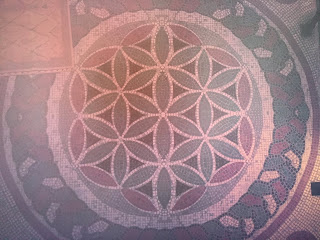 The Flower of Life has been used as decoration throughout history, all around the world.


This kind of attention to detail is what makes these games so damn awesome, and so rewarding to experience.

Stay tuned for the full review! It might be a few months, but I'm sure I'll have plenty to rave about once I'm finished.
Posted by paul_mic at 9:39 PM No comments: 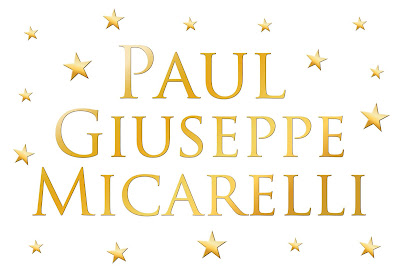 I don't usually post a lot about my personal life here, but I am excited to announce that my wife Loretta & I are planing on having a son, Paul Giuseppe Micarelli!

She is about halfway through the pregnancy right now, at week 22, or 5+ months. Ever since we first started dating, we knew we wanted to have children and and a family. It's something we talked about and planned extensively before and after we got married. It helped that we were both in our 30's & 40's when we started our life together. We both had plenty of life experience, knew what we wanted, and were ready to take the steps to make it happen.

We also believe very much in mindful, spiritual approach to life, hence the brand we formed together called "Conscious Living for YOU".  Conception and our approach to having a child was no different, and we practiced visualization and mindfulness as we attempted to create new life.

Conception happened on the very first try, since I was using an app to track her menstrual cycles. We found out she was pregnant at her mother's Donna's house, after she missed her first period. After she took the test and saw it was positive, I went into the bathroom with her mom her step-dad Steve and we all hugged and celebrated. I told me parents, Paul & Karen, that night, but help off on breaking the news to the rest of my family.

I broke the news to my other family members totally out of the blue. It was at one of my nephew's birthday parties, and I had got done working a Fantasy Photos event and was pretty tired. Loretta wasn't even there, and I had mentioned something about her having a skin rash, but not wanting to take steroids because... Oops!... & I stopped myself. I looked around at everyone, looking back at me confused. My mom was standing right next to me and was the only one that knew. I looked at her, and she made a funny face like "I'm not saying anything!"

Finally, I was just like "Screw it," and told everyone that she was pregnant! They didn't know if I was serious or not, because of the weird way I blurted it out. I assured them I was, in fact, serious, and they proceeded to have a good laugh about it.

Right before Christmas 2019 we finally heard the baby's heartbeat. We both were very emotional and got choked up hearing that our baby was apparently healthy in there. Hearing the quickly beating heart makes it seem so real, it's an indescribable feeling for a parent-to-be.

Then, on New Year's Eve we got bloodwork and genetic testing results back, which were all ok. The nurse told my wife that we could know the gender of the baby, if we wanted. I'm usually very patient, but in this case I absolutely wanted to know and did NOT want to wait any longer for the results. So, Loretta put me on speakerphone with the midwife while I stood outside my work. When she told us it was a boy, I broke down sobbing, after thanking & hanging up with the midwife. My wife asked me, "Are you ok?" over the phone, because she heard me crying uncontrollably. It was truly the happiest moment of my life, besides marrying Loretta, and I felt like my head was spinning all day after getting the news.

I would have been just as happy if I was expecting a daughter, and had names already planned out either way, but we both were hoping for a boy & felt that's what it was going to be. My name is Paul Michael Micarelli, and my father's name is Paul Joseph Micarelli. I wanted to keep the tradition of Paul "___" Micarelli going, and we decided to use Giuseppe, since that was my grandfather's name (Joseph (Giuseppe) Armando Micarelli) and it also honored both my Dad's middle name & her dad Joe.

The most recent step was to see ultrasound imaging of the baby a couple weeks ago. I had never seen ultrasound images in person, and was amazed at the ability to see the sound waves forming pictures phasing through various parts of the baby's body, showing bones, his skull, the beating heart, and the protrusion that suggested, yes, this was definitely a boy! I was also amazed at how much he was moving, watching his arms and legs shifting around in real time. Within the past week, we have finally been able to really feel him kicking around, and you can feel strong movement from the outside of her belly now.

Here is a picture of the profile, with his head to the left looking up, & his hands in front of his face. 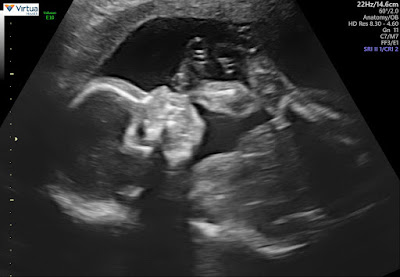 Here is a cool image of the top of his head to the left, & the bottom of his feet in the middle. 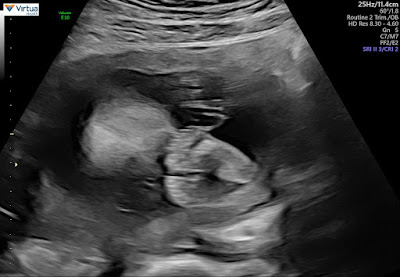 That weekend, we had a gender reveal party for our immediate families even though we already knew it was a boy. We like to have celebrations, and wanted to share the wonderful news with the people who are closest to us. 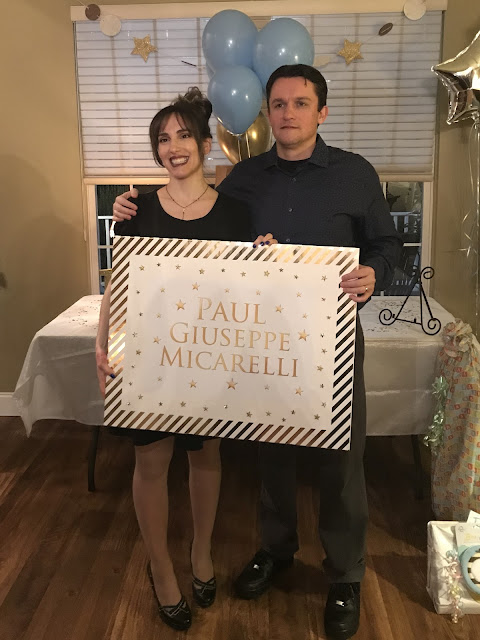 Everyone is excited to meet this new human, and he will definitely be a Monkey Buddha Baby. I hope that we can instill wisdom, compassion, and strength into him that will benefit the entire world.

The pregnancy has definitely not been an easy one for Loretta, mostly due to exhaustion (which is unlike her usually active lifestyle) and skin rashes/irritation that has lasted for months despite seeing specialists of all kinds. We joke that it because the psychic powers of the baby are so strong that it is causing her body to go haywire. Realistically, it's probably due to her lifestyle & diet changes, as well as the flood of hormones & biochemical reactions she is dealing with.

We just pray that the baby stays healthy, and is delivered without complications. The one thing I've discovered already is that fear is something to stay constantly vigilant against. The mind can produce endless scenarios about what could go wrong, and one must stay focused in the present so the mind doesn't dwell on the infinite negative possibilities. I continue to be grateful, and appreciate the blessings that I am able to experience. When this child is born, my gratitude will be boundless as I try to lead him toward a long, happy life in this crazy, wonderful world.