The "Party of God" & Torture

Yes, the "Party of God" has once again taken a stand.
I'm not talking about Hizbollah, but the other bunch of extremists - George Bush's Republican Party.

Americans are blessed to have these beacons of morality upholding Traditional Christian Values, such as torture and imprisonment without trial.

"A lack of proper screening also meant that many innocent Iraqis were wrongly being detained—indefinitely, it seemed, in some cases. The Taguba study noted that more than sixty per cent of the civilian inmates at Abu Ghraib were deemed not to be a threat to society, which should have enabled them to be released." - New Yorker Magazine

Who needs Habeus Corpus, the U.S. Constitution, or human rights when you have an insane leader who claims to have direct authority from God and sadists and idiots willing to follow him? 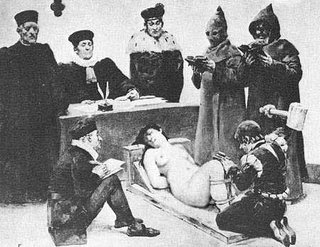 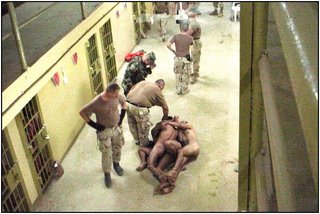 I'm registered as an Independent voter, but I think Democrats need to keep calling out the obvious incompetence and outright lies that have become standard procedure for Bush, Inc. The majority government of the GOP has insisted on controlling the issues, so it's necessary to emphasize their consistent failure on every important issue our country has faced. Many politicians are shady crooks, but here we're dealing with actual criminals, either under investigation or already indicted.

If the case is not made overwhelmingly, then things will continue in a downward spiral. At the end of his speech, Rep. Tim Ryan alludes to the inevitable consequence of continued war if the Bush's GOP maintains the majority in November - a nationwide military draft. 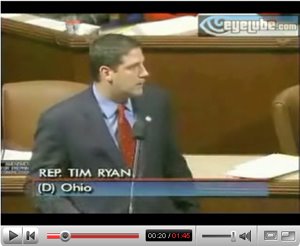 War Not a Solution for Terrorism: Howard Zinn

This Boston Globe editorial by Howard Zinn explains clearly and succinctly why the excuse of "Terrorism" for military aggression & occupation of foreign nations is a complete farce to cover for other agendas.

There is an even simpler argument, though... "Violence begets violence."
or, if you prefer... "An eye for an eye makes the whole world blind."

click for article
"War is Not a Solution for Terrorism"

"The history of wars fought since the end of World War II reveals the futility of large-scale violence. The United States and the Soviet Union, despite their enormous firepower, were unable to defeat resistance movements in small, weak nations -- the United States in Vietnam, the Soviet Union in Afghanistan -- and were forced to withdraw."

"So if an action will inevitably kill innocent people, it is as immoral as a deliberate attack on civilians. And when you consider that the number of innocent people dying inevitably in "accidental" events has been far, far greater than all the deaths deliberately caused by terrorists, one must reject war as a solution for terrorism."
Posted by paul_mic at 8:51 PM No comments:

My whole family used to get a kick out of this guy on a cable TV show called "Biker Billy Cooks With Fire". He was a real character. It turns out Biker Billy is still at it, growing super hot jalapeño peppers. Yum!!!
Click Here for link.

These jars of a fez-wearing monkey are crazy. 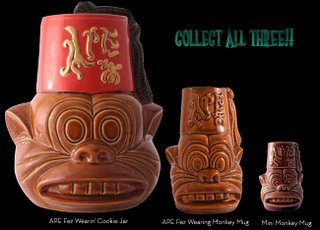 seen on boingboing.net
Posted by paul_mic at 6:38 PM No comments: 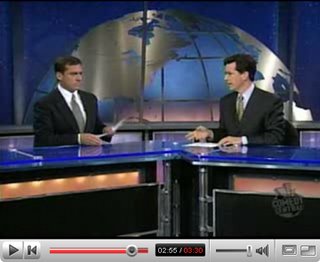 Dubya Shows His Respect For America

BoingBoing.net finds the perfect quote for this photo of Bush doin' the "Freedom Stomp":

To paraphrase George Orwell:
"If you want a vision of the future,
imagine a shoe stamping on a symbol of freedom - forever." 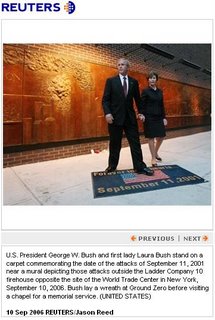 Who the hell thought that standing on an image of the American flag
would make a good photo op on 9/11?!?
These people are either idiots or they really just don't give a damn.
Posted by paul_mic at 9:28 PM No comments:

Like the JFK assassination, the traumatic nature and scale of the attacks of 9/11/01 will always result in speculation about the actual chain of events and their cause, no matter how outrageous. There will always be people who are convinced that either holographic missles, thermite mini-nukes, or George W. Bush himself riding a UFO from area 51 are the real cause of 9/11.

Those "9/11 crazies" who, for some reason, doubt the complete ethical infallibility of the Pentagon, the CIA, Wall Street, the Bush family, etc. should at least try to make a convincing case that there was some shady shit going on. The following is like a convenient Swiss army knife of 9/11 doubt, without any "airplane pods" in sight.

The War on Waste - CBS News

• Finally, as of today, if you go on the FBI's Most Wanted Website, Usama Bin Ladin is listed as wanted for several terrorist attacks, but there is no mention of the "biggest crime to take place on American soil" which occurred on 9/11 and for which we have been told he is responsible. 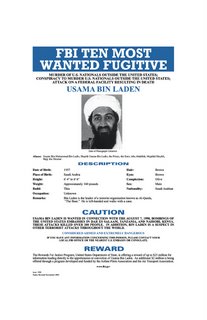 Click to Enlarge
Posted by paul_mic at 8:23 PM No comments:

Now this is my type of game!
The players compete to relax and slow their heart & breathing rate. 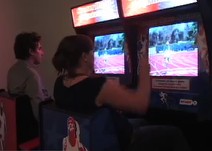 There are alot of biofeedback devices & methods that can be used to control body systems through concentration or regulated breathing. This is an interesting way to introduce meditative techniques that have been know for thousands of years to today's undisciplined masses using modern technology.

It's ironic that the activity humans do more than anything, breathing, needs to be taught in order to be done correctly.

"There is a way of breathing that's a shame and a suffocation.
And there is another way of expiring,
a love breath, that let's you open infinitely!" -Jelaluddin Rumi
Posted by paul_mic at 8:34 PM No comments:

This story linked on boingboing.net is about imitative behavior in newborn monkeys. Like human babies, infant primates learn to communicate by this type of social interaction.

The complexity of life is astounding, and studies like this show that the illusion of some kind of separation between humans and the rest of the animal kingdom is just that - an illusion.

Monkeys are people, too!

...and people can also be monkeys! 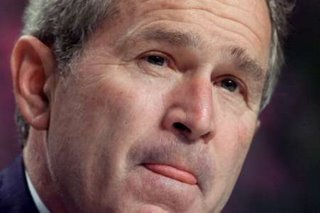 Another great Daily Show segment highlighting the insanity of our leaders.

The comparison of the War Monkey to a Bizarro John Lennon had me laughing out loud.