Flower of Life Design in "Tomb of Jesus" 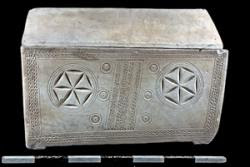 I am fortunate as a designer to work on different types of creative projects. The published game I created, "Da Vinci's Challenge," is something special because, for me, it really is 'classic' in every sense. When I was designing the game as a student back in 2000, the thing that fascinated me the most was the sense of history and universality of the symbolic pattern of circles called the Flower of Life. It is a recurring visual device in that art of cultures spanning the globe; India, Egypt, Japan, Spain, and even in the studies of Leonardo da Vinci - hence the title of the game!

Despite being familiar with the widespread use of the Flower of Life patterns, I was in for a bit of a surprise tonight. I clicked on a news article about the discovery of the supposed tomb of Jesus and his family that is the basis of a documentary by James Cameron. This is obviously highly controversial & it is already getting crazy coverage.

In most articles I've seen, there's also photos of stone coffins & one in particular that they are claiming belonged to a 'Mary'. The decorative carvings form the "Seed of Life" - a simpler design that forms the center 'seed' of the Flower of Life pattern. In fact, the Seed of Life flower-in-a-circle design is in the center of the art on the Da Vinci's Challenge game box. 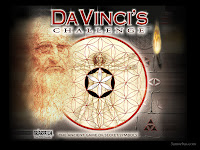 Of course, the claimed connection between the tomb & the Bible characters might just be a load of crap. Regardless, the decorated coffin is an interesting example of the use of the Flower of Life pattern in the sacred art of ancient cultures.

Here's a close-up of the carved ossuary from New Zealand Herald : 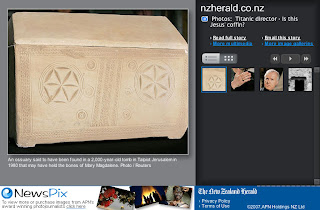 The homepage for the documentary on Discover.com has the carved design peeking out from the bottom corner: 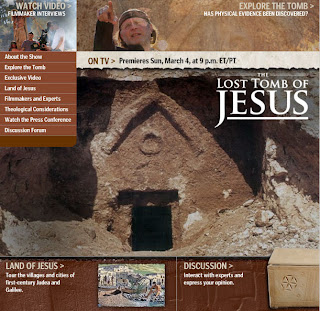 The story, with the Mary ossuary, has already made a stir on Google News: 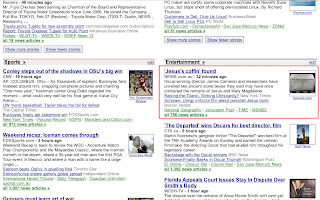 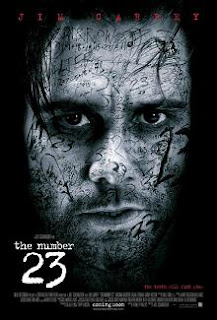 In a weird coincidence (only for me) the Jim Carrey movie "The Number 23" comes out tomorrow - on my birthday - February 23. In the film, his character becomes obsessed with the mysterious workings of this number in a book that seems to be about his own life.

Of course, numbers are simply an abstract tool that can be used describe and relate anything in the realm of human experience. The "mystical" connections and coincidences that people find when they manipulate numbers are just that, arbitrary connections formed in the human mind. If you fixate on any number or letter, guess what? You'll see it everywhere and swear there must be a deeper relationship there! Just like Jim Carrey is doing now in real life.

I'm posting this today, since tomorrow I'll hopefully be busy seeing the movie and celebrating another year of life in this wild & wacky world. Anyway, more on the amazing number 23...

The Insanity of Nuking Iran

"Iran Must Get Ready to Repel a Nuclear Attack"

This analysis I read last month by a Russian general is a sobering look at the situation in the Middle East. I don't know what kind of miracle can stop this madness, since everything in the article is happening as stated. Between the naval buildup in the Persian Gulf and the sudden barrage of "It's Iran's fault!" stories in the news, it looks like deja vú all over again. The most frightening reality is that the U.S. and Israel policy-makers do not want peace in the region. They want power & empire, which means destroying all opposition, which means creating widespread chaos:
"This will solve the problem of completely destabilizing the region, a task of major importance for the US and especially for Israel. The war in Iraq was just one element in a series of steps in the process of regional destabilization."

I metioned the lust for power, which goes along with the main reason for every war - greed and lust of money:

"...what matters to the Americans is not how big the shock is, but how high are the revenues of their military-industrial complex."

Here's another article worth reading, an interview with M.I.T. Professor Noam Chomsky:

"On Iran, Iraq, the Democrats and Climate Change"
Posted by paul_mic at 6:20 PM No comments:

This is another "Meet the Press" parody that jabs the ridiculous lengths that delusional hero-worshippers will go to defend the Worst President Ever.

The sad thing is that it seems 30% of this country really would find a way to rationalize Dubya eating a baby on live TV.
click to watch 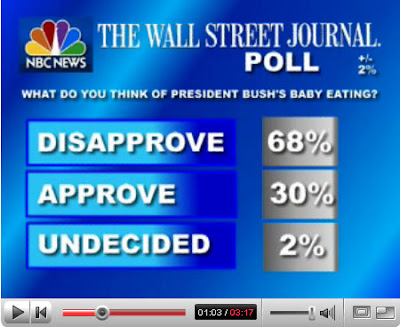 Meet the Press for Idiots

Conan's the man!
Here's a funny, yet oh so true, little segment...

"Meet the Press" for Idiots 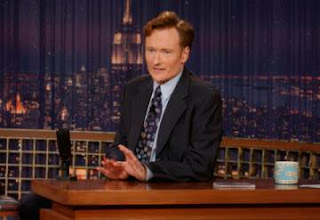 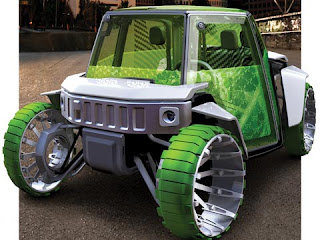 The imagination is the most powerful tool that humans have, and I'm a firm believer that anything man can visualize will eventually be acheived. Time and time again, thoughts that have seemed completely impractical or physically impossible become reality.
Once fantastic ideas like levitation, invisibility, teleportation are being visualized into reality.

We are entering a era of human history where anything that can be imagined can be created physically or digitally in some form. This conceptual, creative novelty is a human resource that is thankfully reaching heights beyond anything in known human history, despite the ever-present chaos in the world. Even though Hummer is traditionally known for it's complete gas-guzzling disregard for moderation and modesty, their concept of the Hummer O2 deserves credit, if nothing else except for the amazing combo of cool, tech, & organic factors. 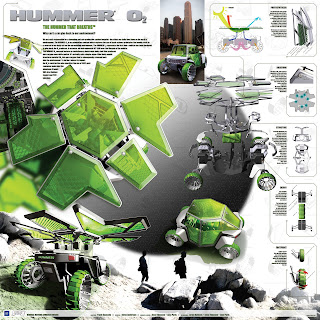 Email ThisBlogThis!Share to TwitterShare to FacebookShare to Pinterest
Labels: religion

...and I'm not talking about Iraq - that's more like dismemberment.

Unfortunately, the country that is getting slowly bled is the United States.
When half of our taxes are already used for the goal of state-sanctioned death and destruction, it's pretty horrifying for any rational person to see the War Monkey & his gang making proposals like this:

"US President George Bush has proposed deep cuts
to federal health care, education, and transportation programs,
searching for new money to pay for increasingly costly
defence programs and the war in Iraq."
So Dick N' Dubya have their sights on Tehran, Congress is waiting for more Republicans to wake the hell up and help stop the madmen in the White House, and we taxpayers are throwing money to the wind everyday we are occupying Iraq.

Maybe this guy has the right idea...

"Ed and Elaine Brown were convicted last month of plotting to conceal their income and avoid paying federal income tax for years. They argued the tax is illegitimate and no one is required to pay it. They said they would pay their taxes if the government shows them a law that allows labor to be taxed."

Of course, if anyone were to stage a tax revolt or a protest action like the Boston Tea Party they would be considered a terrorist, as the British overlords considered Thomas Paine and Samuel Adams to be. (Here's an idea: The Houston Oil Party, dump barrels of oil into the Gulf! Just Kidding!(?))
Posted by paul_mic at 6:30 PM No comments:

I've been a Howard Stern fan since I was in middle school, when I would listen to his show on the bus in the morning in my Walkman. Me and my younger brother used to watch his Channel 9 TV show on a crappy black & white TV I had in my room, since my mom wouldn't let us watch it.

Since he has moved to Sirius, alot of people I know have signed up for satellite radio... mostly because of Howard's show. It is unbelievable how funny the show is, and alot of it is because of the crazy personalities on the air. One of my brothers got us tickets to see the Killers of Comedy show that came to the Broadway Theater in Pitman, a stand-up comedy show that includes a half dozen comedians and personalities who appear on Howard's show. It was funny as hell and I got some pictures with a few of the guys who performed. Below the photos is the graphic I made for the shirt that I wore, featuring possibly the best guest in the history of Howard's (or anyone's) show - Beetlejuice. 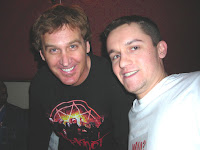 • Me with Jim Florentine, voice of the retarded puppet Special Ed from the show Crank Yankers. His act was really good & he was cool about letting me snap some photos. 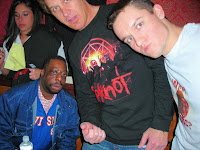 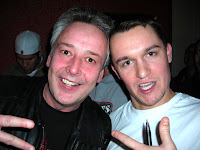 • Me w/ the Reverend Bob Levy. His act was hysterical, too. He was trying to sell shirts at the merchandise table after the show, saying "Buy some shirts, I need an eight-ball." and "I need money for hookers."As I was getting the pictures, he dropped a shirt that we picked up & he didn't notice. Sorry for not contributing to your cokewhore fund, Bob! At one point during his act, he was asking the audience what kind of porn they liked. Nobody was saying anything, so I yelled "Blue Iris!" and he started laughing and telling dirty old lady jokes. Funny stuff.
The Beetlejuice graphic I made for the shirt I wore to the show: 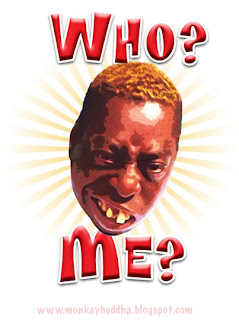 Email ThisBlogThis!Share to TwitterShare to FacebookShare to Pinterest
Labels: humor

Man, this guy is sooo right on the money...

"What has Apple got in store for us next?"
The thing that got me really hyped up over the announcement of the iPhone is the inevitable use of the touchscreen interface in a full-scale tablet Mac. This is the computer I've wanted ever since my family got it's first Windows 3.0/DOS piece of garbage computer, way back when.

Email ThisBlogThis!Share to TwitterShare to FacebookShare to Pinterest
Labels: tech 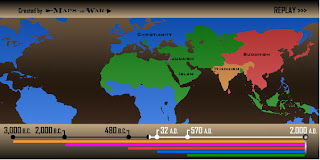 This is a neat animation showing the geographic domains of religion over time since the formation of the oldest of the world's major religions, Hinduism.

Animations like this really give the impression of institutions like religion or empire as being an amoeba-like phenomenon that almost has a collective mind of its own... moving, expanding, devouring each other, learning and adapting to the changing situation.

History of Religion
Posted by paul_mic at 6:20 PM No comments:

The Universe: Infinities Upon Infinites

It's very interesting to compare the "discoveries" of current science and their amazing analogs throughout ancient history, whether in philosophy or technology.

"No Big Bang?
Endless Universe Made Possible by New Model"

"Lord Vishnu is said to rest in the coils of Ananta,
the great serpent of Infinity,
while he waits for the universe to recreate itself." 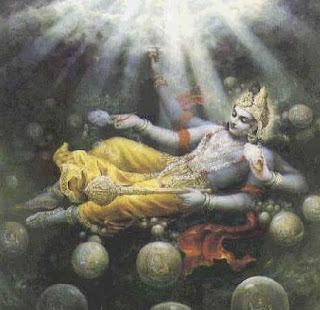 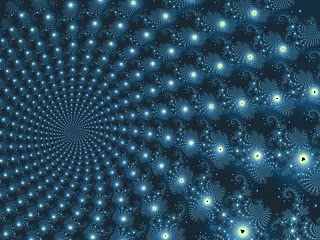 This video is one of my all-time favorites & always cracks me up when I watch it. This neighborhood is only half as crazy as people who see Jesus in a frying pan. There are more great quotes in this segment than most news shows get in a month. The Eazy-E clone at the end should be careful, though...

Leprechaun in Mobile, Alabama
"I wanna know where da gold at.
I want da gold... gim me da gold!" 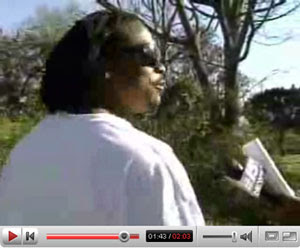 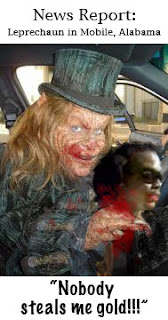