There are many ways to recreate and visualize aspects of history. I've written about using 3D rendering & virtual reality to see what ancient buildings and areas looked like.

Reconstructing the past can also be done using physical media. My wife & I are watching the series "Rome" and I love how the visual presentation really puts you into that time period. My only complaint about that show is that the Roman characters all have British accents... it makes no sense!

Anyway, after watching an episode of "Rome" I was looking up paintings & busts of Julius Caesar, and looking to see if anyone tried making modern-day representations of him. I came across this article about the Césares de Roma project, in which sculptor Salva Ruano accurately recreates the faces of Roman emperors.

The classical white marble busts we are used to seeing are modeled accurately, but really don't express the humanity in these ancient people. It is pretty stunning to see these hyper-realistic faces, based on ancient busts and other reference. The life-like details, along with the effective lighting, bring out the personality in their likeness.

Here are a few of the more famous emperors: 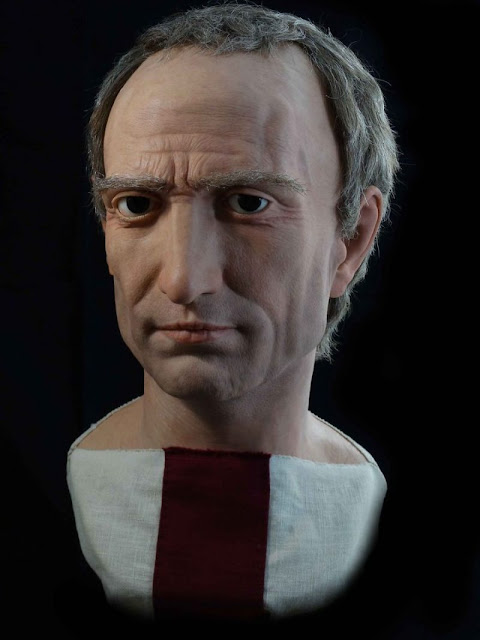 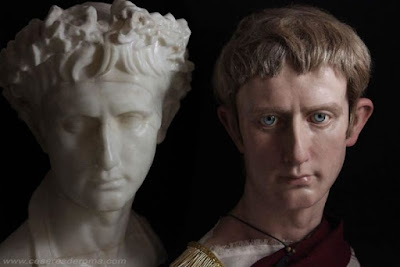 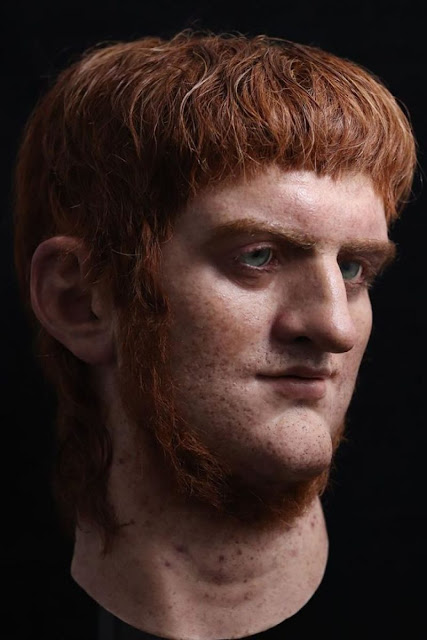 This video I just found shows the incredible about of detail that Salva Ruano puts into these sculptures:

I am 41 years old and was born when the original Star Wars came out. Since my earliest memories, the Star Wars saga has been my favorite fictional work, and has contributed so much to the person I've become.The imagination, the mysticism, the vision have inspired me my whole life - including into adulthood.

I always hoped that I would live to see this saga conclude as a "trilogy of trilogies", even after it seemed like the Prequels would be the end of the movie series.

I've had my fair share of criticisms of all the movies, but it's only because I love the movies so much, and they are such an important cultural phenomenon of our time. The Last Jedi, which has proven to be a very divisive film, had some of the very best and the very worst of the Star Wars legacy in it.

I can say that the trailers for the 3rd trilogy have been awesome - due to the cinematography, the stellar music by John Williams, and great editing. After seeing the final trailer for Episode 9: The Rise of Skywalker, I can say I'm hyped for this movie and hope the saga is concluded in a proper & meaningful way.

As the one trailer for the D23 Disney Expo showed, this is a conclusion of a truly epic story arc that spans decades in both the real world, and also in the fictional galaxy far, far away.

Dark Rey with a double Sith lightsaber.. Whaaaat?!?!?
Just a Force Vision, or a  clone???

It is late on a Friday night, and I could go on for hours about this stuff, so here are a few things that I think need to be in the final movie of the Skywalker saga:

As I just said, this is the Skywalker saga. There needs to be some kind of resolution to the story of Anakin Skywalker's family. Besides his grandson Kylo Ren's obsession with his mangled helmet, "The Chosen One" has been mostly absent from the Sequel trilogy.

Emperor Palpatine is clearly playing some kind of role in this movie. He is another character who has spanned the entire 9 movie stretch (I think the droids R2-D2 and C-3PO are the only characters to appear in all the movies, which is a great statement on how AI might be able to continue beyond our human lifespans). At first, I thought it would be cool if Palpatine's spirit somehow stayed intact, and his evil ghost haunted Kylo & Rey as they made their way through the Death Star, making this movie like a sci-fi horror flick.

Is this an ancient Sith throne, or the seat of power for another unnamed entity?


However, the trailer makes it appear that Palpatine is in a physical incarnation. Perhaps he is a "scarred & deformed" mecha-Emperor - whose grotesque remains are held together by technology & his indomitable, malevolent will. That would be an interesting angle, one explored in The Clone Wars cartoon where Darth Maul survives & has cybernetic limbs.

Speaking of the Emperor, there is a confrontation between Kylo & Rey in the iconic ruins of the Emperor's Death Star throne room, which somehow survived the atmospheric entry and impact as the battlestation crashed into the moon of Endor.

It would be awesome if we see the spirits of the "thousand generations" of Jedi who live on in Rey manifest somehow. My personal wish would be for Anakin, Luke, Leia and Ben should come together as 3 generations of Skywalkers in spirit & physical form to finally defeat this evil power.

Perhaps Leia faces Ben/Kylo at some point, like an inverse of Luke facing his father. There are many interesting possibilities.

I am hoping that the title "Rise of Skywalker" refers not only to the return of Anakin Skywalker in some form, but also to a new approach to Force users that rejects the rigid standards of the Jedi/Sith and blaze a new path - known as "Skywalkers" in honor of the legendary family.

"Skywalker" is a term used in shamanic cultures to refer to someone who takes visionary flight, and was clearly a reference used by George Lucas when creating this story. The best aspects of Star Wars are the mystical & philosophical elements, and I look forward to seeing what The Rise of Skywalker adds to this mythos.

There also looks like there will be some amazing large-scale conflicts. They hopefully will have more weight than the slo-mo space-chase and alien racehorse escape of The Last Jedi.

One big question and the source of endless internet fantasies is the nature of Rey & Ben's connection (dubbed "Reylo").

Do they team up at some point, and what happens? Does she just look past the fact that he was a murderous, power-hungry megalomaniac? Does Kylo die, and Rey carries on the Skywalker legacy in name only? Do they forge an alliance and together start a new line of Force users? Whatever is decided, it should at least give a sense of purpose and finality to their story, and the saga as a whole.

Well, those are my thoughts for now, but I'm sure I will have plenty more to say once I actually see the final movie in the Skywalker movie saga. Only a couple months to go for the culmination of a lifetime of being a Star Wars fan!

When I saw this image of a disembodied nervous system on The Weird Wide Web, my spine & neck twitched involuntarily. 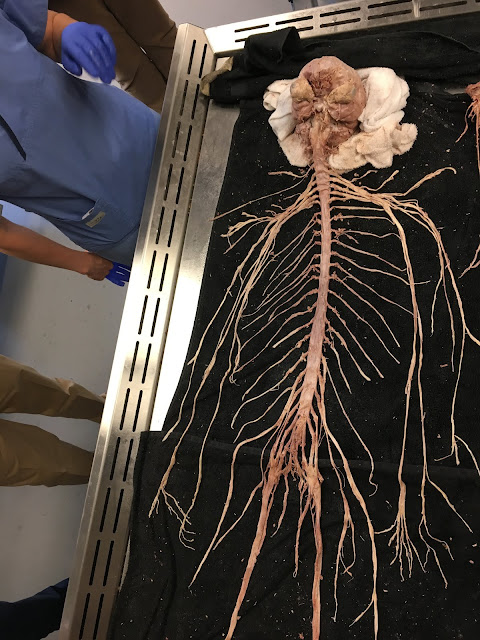 Perhaps the self-realization that * the energetic system forming this experience of "being" is a fragile, stringy arrangement of organic tissue * struck a nerve.
Posted by paul_mic at 9:45 PM No comments:

I was browsing stories in Apple News & came across this article about A.I. (Artificial Intelligence) systems being used to explore graphic design.

Being a designer who specializes in logos and branding, this piqued my interest for obvious reasons.

I've long thought that creative disciplines, whether commercial or "fine" art, would be one realm that would be somewhat safe from imminent dominance by machines. However, reading stories like this make me realize that A.I. as a design tool may be much more powerful and imminent than I thought.

Really, it's not surprising that information systems & deep machine learning can be used to generate novel visual elements. Like real life, it's a matter of inputting enough reference material and giving some parameters to adhere to certain needs. Ultimately, it's pattern recognition, and it's something the human brain excels at in certain ways. The speed at which computers and neural networks operate certain functions compared to the brain means that A.I. may be able to deliver sophisticated and relevant solutions to visual design problems instantly, with many effective choices.

I'm not worried for my career at the moment, because the human element will likely be necessary for the foreseeable future. Just like Photoshop did not actually take away artist's jobs, it actually created more & took them to a new level - I suspect a similar quantum leap will happen, when A.I. becomes widely used as a design and idea communication tool.

Visualizing the Speed of Light 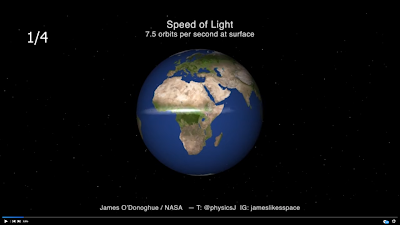 The nature of light, including the speed at which it propagates through space, is something that's difficult for the human mind to understand fully.

Add relativity into the mix, and the properties of energy and light become downright mysterious.

This GIF by James O'Donoghue using NASA imagery, although showing the speed that light travels, really highlights the vast cosmic distances that exist beyond our human & planetary scales.


from Science GIFs via Gfycat

This visualization illustrates the difficulty that the human race is going to have with space travel by "conventional" means - by which I mean trying to accelerate through physical space to a percentage of light speed to reach other star systems.

I think the answer is the development of technology that has been imagined in Star Trek and described by Bob Lazar, who claim to have worked on reverse-engineering spacecraft at the S-4 facility near the once-secret, now-infamous Area 51 test site.

We need to create technology that is able to manipulate gravity in such a way that it can warp space-time, so that the traveler is warped to the destination faster than light would be able to travel through the same space. I think the ideas of Nassim Haramein are leading us in the direction of technology.

Whether it's eventually feasible remains to be seen, but it seems to be the only way to travel through interstellar space without taking generations of humans, or centuries of sending out AI-driven machines.

Perhaps another option is to become beings of pure light ourselves, so that relativistically time stops altogether. However, then our need to explore and physically experience things would be irrelevant anyway...
Posted by paul_mic at 3:24 PM No comments: