I came across this extensive list of links to awesome Google videos that could occupy me for weeks on end.

MIND EXPANDING VIDEO LIST
There are documentaries & lectures by visionaries such as Terence McKenna, Alex Grey, Alan Watts, and many more. Videos about Mysteries, Consiousness, Alternative Science, & Conspiracies! There are also music videos from the Doors, Bob Marley, Tool, etc....

It pisses me off that I'll never be able to watch all these great videos in their entirety, but the fact that such an interesting collection can be electronically compiled and shared around the world is pretty astonishing. 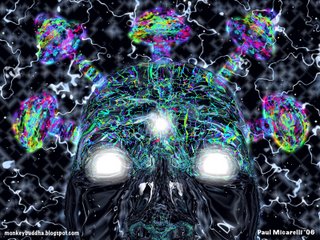 Psychedelic Science
Posted by paul_mic at 5:41 PM No comments:

(seen on boingboing.net)
We are living in a golden age of communication. The experimentation of new media and messages is exciting to watch. Click to view a cool video transient moving images created with water:
Jeep Waterfall 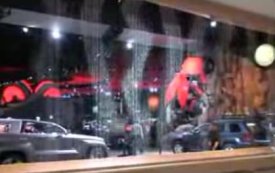 I'm a visual person, so the more there is to look at, the better. However, the amount of visual information shoved in our faces is sometimes completely ridiculous, like in the crazy Times Square, NYC. This webpage tries to chronicle every ad in the commercial advertising supernova in the heart of Manhattan. It makes me wonder if we will ever hit a wall of novelty. 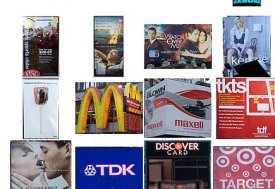 It appears that a statue of the Hindu monkey god, Hanuman,
has been seen shedding tears in a temple in India.
(Doesn't he know that Monkey Buddha's aren't supposed to cry?)

The only explanation I can think of is that Lord Hanuman saw an advance copy of this year's State of the Union speech. 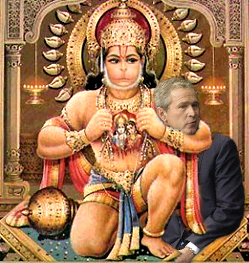 Pablo Picasso was undeniably one of the greatest artists in history because of his technical skill, his innovations in technique & media, and the synthesis of modern & ancient sensibilities. I can't say that I 'like' all of his work, but all of it fascinates me.

It's tempting to try to understand the specific idea of cubism in intellectual terms, as in a definition like "the representation of multiple physical & experiential dimensions in a 2D space." However, this is simply an act of assigning ape-grunts to a sensory experience, which can sometimes create a filter of pre-conceived notions.

Watching this time-lapse video of one of Picasso's paintings from 1955 has intrigued and mystified me even more. We can define techniques and styles all you want, but art at its core is the use of creative energy in any manifest way. This movie highlights the essence of art as a process of sublime creation. It's really cool to slide through video and watch the painting morph...
The Mystery of Picasso 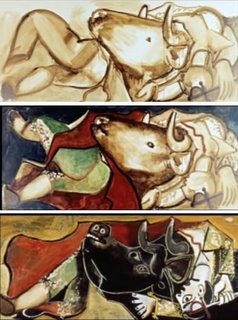 (You have to be a real bastard to be
25 times more unpopular than the Devil.)
from Crooks & Liars 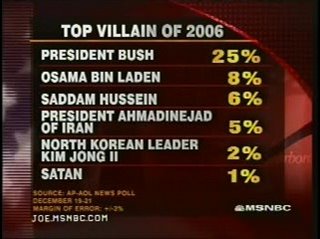 Finally, something Dubya can claim to be #1 at!
Posted by paul_mic at 1:05 PM No comments:

• "Divides the world and creates war without end"

• "Refers to war as peace, death as a solution for justice,
and serving the wealthy as a means of helping the poor."

• "Attempts to win supporters, and will silence anyone or make enemies of any country who refuses to approve of him."

• "A leader who deceives many people."

• "They will follow in his battles that he will declare, boldly and without humility, are for a purpose which is untrue."

• "Many nations will recognize that he is evil, but his own people will be inclined to believe his deceptions.
This is because the people who follow him will lose the ability to discern between the truth and the lie."

• "A popular figure among those who are deceived by him"

• "Professes to be a man of God, who is himself a Christian."

• "He could be a high-ranking political leader, who will initially do very good, popular things, which will win him many followers.

• "In the end, however, he is supposed to get increasingly totalitarian and elicit more and more sacrifices from his followers until eventually his evil ways become known, and the era of 'trials and tribulations' begins." 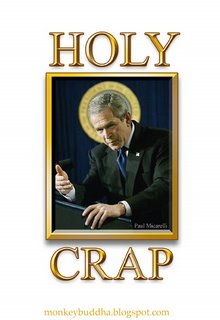 I haven't posted anything in about a month due to overall laziness, the holidays, and the various good & bad B.S. that life tends to produce.

However, today I have been inspired by the introduction of a creation that is one of those things (usually made by Apple) that is a perfect blend of simplicity, utility, and aesthetic beauty. One of my heroes Steve Jobs presented the iPhone today and this thing is... how do I put it eloquently,.... f*@&ing awesome.

Now all Apple has to do is release an iTablet and I will proclaim Apple the greatest company in the Universe. 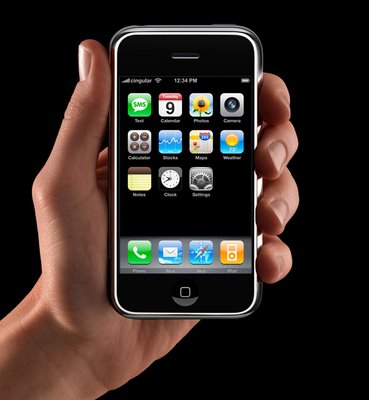 I'm staring into the face of the future.
Posted by paul_mic at 8:33 PM No comments: