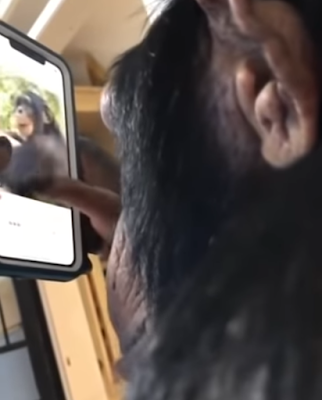 One aspect of the animal kingdom that I've discussed many times on this blog is the idea that animals who share our sensory organs & inputs would likely experience reality in basically the same way that we humans do.

Our use of language & existence of an inner dialogue obviously sets us apart, but when it comes to experiencing the world, I don't think there is much difference between us and other creatures, especially other mammals & primates.

I think this video of a chimpanzee scrolling through social media on a smartphone, looking at and closing photos, shows just how alike we really are...

After my recent solo show at the Grand Theatre gallery, Paul Micarelli "Mindscapes" I was referred to another gallery in Millville that is ran by artist Tania Pomales:

The theme of the show is "The Resurrection" and Tania accepted a couple pieces of my digital artwork in to the show, which will be up for two months. To see more of my graphic design & fine art, visit my website: www.PaulMicarelliDesign.com

Here is the photo gallery from the show's opening reception: 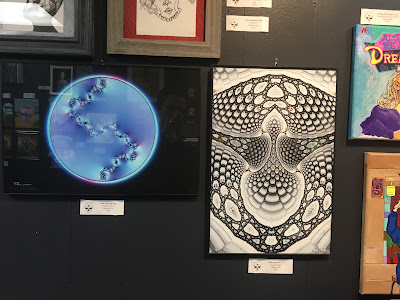 Me & Tania, the owner of Calvaria Gallery 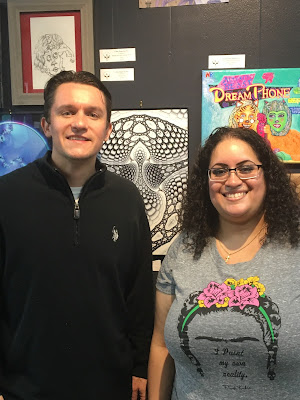 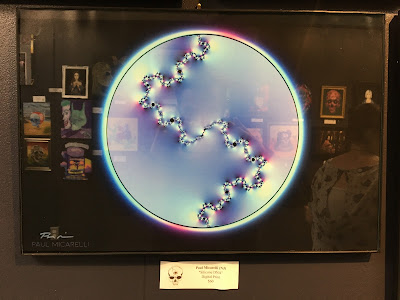 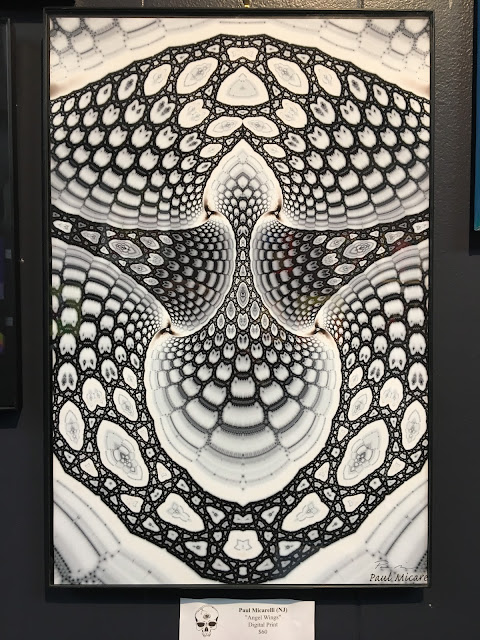 The gallery was filled with amazing work and I am honored to have my art on display with other talented artists.

Check out the gallery to see more pics: 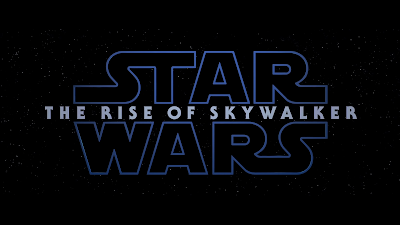 The first teaser trailer and title of the final installment of the main Star Wars saga was finally released:


As I've talked about on this blog many times over the years, Star Wars is by far my favorite movie series and is a story that I have enjoyed since I was a kid.

It's amazing that this legendary work of fiction has endured over the years and evolved while still staying (mostly) coherent. Although I have many criticisms of the details in the movies, and most recently explained my problems with Episode 8: The Last Jedi, it remains an epic fictional world that has enthralled millions of people. Star Wars has sparked the imaginations of countless children and adults, and has been a continual influence on pop culture.

Being the final episode in the trilogy of trilogies, with a vast fictional landscape full of memorable characters, the burden to wrap up this series in a satisfying way is an immense one. Especially after the divided reactions and fan criticisms of The Last Jedi, the pressure to end the Skywalker saga effectively is the tallest order in movie history.

The immediate speculation after the teaser trailer was released included questions about the title. Who is the "Skywalker" that is being referred to? Is is Luke (whose voice is heard in the trailer) coming back as a Force ghost? Will a redeemed (or divided) apparition of Anakin be making an appearance? Is Rey going to be revealed as a Skywalker, or adopted by Leia?

I'd like to think that the term possibly refers to a new lineage of Force users who take on the legendary name of the Skywalker family. Maybe this new breed of Force sensitive individuals finds the balance that eluded previous orders & groups. The 3rd movie of the first two series ended with "Jedi" and "Sith", so maybe this new title resolves the conflict between the two ideologies.

When George Lucas created this world, he used the term "Skywalker" intentionally because of it's connotations in the shamanic tradition. The skywalker is the shaman who bridges the physical world & the spirit world, sometimes flying through the sky to retrieve the souls of those who are sick or possessed.

The heroine Rey seems to be the one who is carrying on Luke's final teachings about finding balance in the Force and resolving the dichotomy of the Light and Dark. Although I think there's been a lot in the sequels that have been executed very badly, I also think there's a lot that has been really profound.

In this one, we hear Rey's heavy breathing as it's revealed she's standing in the desert as a T.I.E., presumably being piloted by Kylo Ren, approaches.

As it is about to overtake her, she flips with lightsaber ignited before the scene is cut. Is it a real encounter or is it a dream or vision of some sort?

There is a lot of speculation that Rey & Ben Solo (aka Kylo Ren) will finally join together to create the new order of Skywalker. However, by the way that the Supreme Leader is smashing people with his lightsaber surrounded by stormtroopers, it is far from apparent from the teaser.

His helmet is being repaired and held together by hairy hands (Ughnauts?) with a material that is glowing a Sith red. I have seen people symbolizing this as trying to put the narrative pieces back together after the deconstruction & "subverted expectations" of Episode 8.

Appearances by Leia and Lando bridge the history of the saga to the new era, and the non-human characters Chewbacca and C-3PO are seen right in the midst of the new band of heroes, Rey, Poe Dameron, Finn, as they look out onto a rough sea. In this body of water is revealed the ruins of one of the Death Stars.

As the screen fades to black, we hear the unmistakable cackle of the greatest villain in cinema history- Emperor Palpatine, the Sith Lord known as Darth Sidious. This is the detail that threw everyone on the Internet though a loop. Although referencing Palpatine bridges the previous trilogies, how exactly is his character going to be utilized? One theory I saw that I like is that his spirit is bound to the 2nd Death Star where he was killed. When the heroes go to its ruins for some yet unrevealed purpose, the apparition of The Emperor haunts or antagonizes them in a way that is almost a horror movie. I think that would be a cool thematic feel that is different than anything that has been in Star Wars, but it might scare the crap out of little kids. Another possibility is that Palpatine appears through a Sith holocron or a recording.

However they use him, I think the more they can connect the overarching story of the 9 movies, the better. Thankfully, this sounds like what they are trying to do.

The one character who cannot be overlooked is Anakin Skywalker. They have to bring Anakin into this movie somehow. We already know that he is a Force ghost, so why he hasn't been incorporated somehow already into the last 2 movies is a mystery. We only get his grandson pleading for him to appear again in "The Force Awakens", but we have no way of knowing if it was really Anakin who he was communing with.

The saga was really about Anakin's redemption, and I think this and the prophecy surrounding him has to be resolved in this series. I think the perfect way to do it would be to make the new teaching of The Force be carried on by those who honor the "Skywalker" name. This way, Anakin's story is still relevant, while leaving open the possibility of future tales and evolution of the Star Wars universe.

My fantasy ending would be a cut to R2-D2 and C-3PO telling & showing the Skywalker story to future generations of Force users, or something showing that the whole saga was taken from the Journal of the Whills.

We will just have to wait & see if Disney and the team making this movie live up to the impossibly high expectations that are awaiting the conclusion of this 40+ years-in-the-making storyline. It is one I have waited all my life to see play out, and it is awesome to witness it happening. 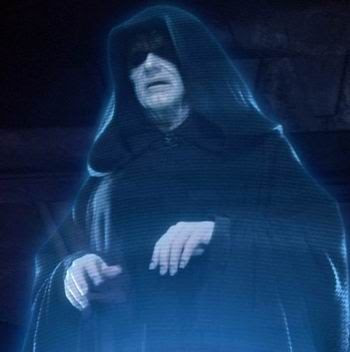 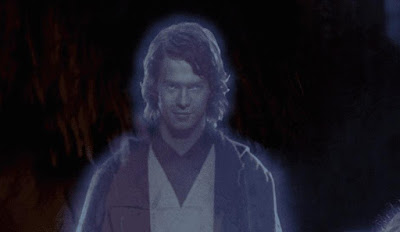 The Silver Surfer by John Gallagher

I've posted before about one of my favorite fictional characters, The Silver Surfer.

I came across these awesome illustrations of the wielder of the Power Cosmic by artist John Gallagher. This image really gives a sense of this power that gives him the ability to travel throughout the Universe at faster-than-light speeds. 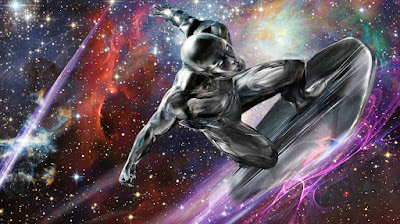 These images are from his DeviantArt page. I'm telling you, look through his whole gallery- it is absolutely amazing:

This illustration shows The Silver Surfer with the even more powerful, nearly immortal being who created him, The Devourer of Worlds, Galactus. 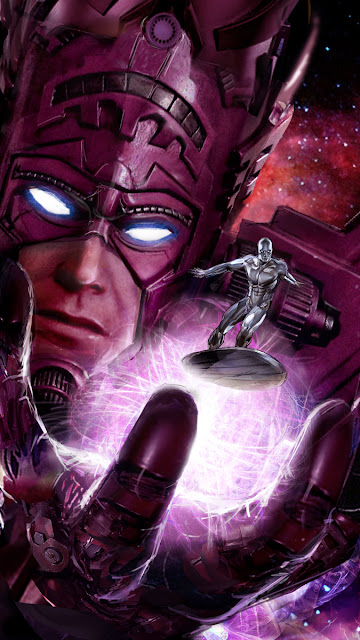