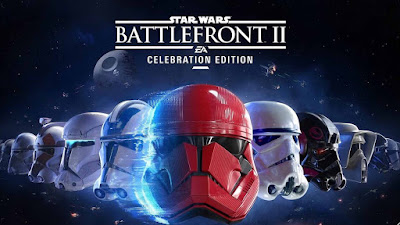 After a several-year hiatus, I have finally gotten back into gaming. My wife got me a PS4 for Christmas because I was always talking about how cool certain games looked. I guess she felt bad that I couldn't enjoy one of my favorite pastimes anymore.

The console came bundled with a few games, but knowing what a huge Star Wars fan I am, she also got me Star Wars: Battlefront II. It was the first game I played & I was pleasantly surprised on how good it is.

I had the "original" Battlefront II for Playstation 2 and it was awesome. I can't tell you how many dozens (maybe hundreds) of hours my brother & I probably put into that game playing each other in Versus Mode over the years.

When the next-gen Battlefront II first came out, it got a bunch of bad publicity due to the publisher, EA, including loot boxes and limited content. To their credit, they've addressed a lot of the negative complaints and improved the game greatly since its release. When I first launched the game, I downloaded the latest updates which included a lot of additional free content.

I haven't ventured into the realm of online gaming, so I stick to playing the story or arcade mode- where you can play the computer or another player with a split screen. My wife grudgingly agreed to play me when I begged her to humor me... but she then kept asking me for "One more game!" because she really got into it. We just put it on "Heroes Only" so we can play as the lightsaber-wielding characters, which is more fun than using the troopers with blasters. There's nothing quite like playing as The Emperor alongside your wife playing as Darth Vader, cutting down waves of rebels like true Sith Lords. 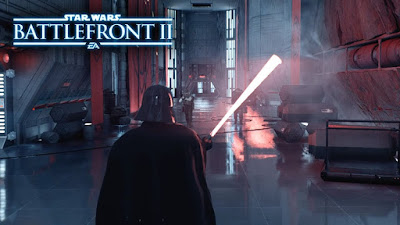 When playing Arcade Mode, I'll sometimes use the troopers because there are so many great variations from the Star Wars movies- Jet Troopers, Clone Commandos, classic Stormtroopers, and now even Sith Troopers from Episode 9. 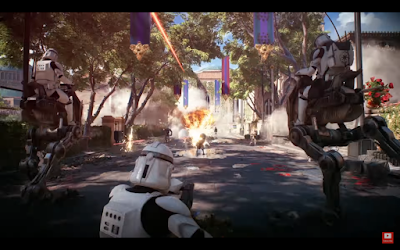 The space battles, where you're flying in starships, are also pretty awesome. The flight controls are a little weird at first, but with some practice they become easier to get the hang of. 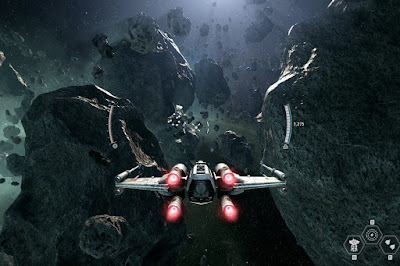 In general, the graphics and sound are amazing. It really puts you into the Star Wars universe and is visually stunning, with the iconic sounds of blasters and lightsabers adding to the authenticity. While playing the story, and sometimes even during an arcade battle, I catch myself just looking all around, impressed with the settings.

I finished the Story Mode, and the additional epilogue "Resurrection". I thought it was very enjoyable overall and thought it weaved a new narrative into the existing "Star Wars" canon very well. Unfortunately, this game had a more interesting & coherent vision than the entire "Sequel" trilogy! I kept thinking, "Wow this really feels like Star Wars, but is also fresh" - from the settings, to the integration of new & familiar characters, to the story itself. The new movies, on the other hand, were a goddamn mess story-wise, and were disappointingly limited in scope & imagination.

The Battlefront story mode takes place after "Episode 6: Return of the Jedi" immediately after the destruction of the second Death Star. It follows an Imperial Special Forces commando, Iden Versio. Iden becomes disillusioned with the Empire after the death of Emperor Palpatine triggers orders for "Operation Cinder," which even targets worlds that are home to Imperial loyalists. You follow her journey as she eventually switches sides to the Rebellion/New Republic. The great thing about the game is that you also get to play as other familiar characters, including the main heroes, Luke, Leia, Han, and Lando at different points. The great thing is that the inclusion of these characters feels like a proper extension of their stories told in the original movies, and not random or shoehorned placement to give them an appearance in the game.

Overall, Battlefront II is a great game that has excellent replay value & is guaranteed fun for any Star Wars fan. 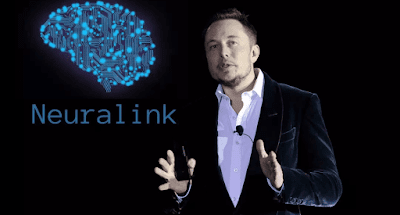 Well, it took only 10 years... but technology is finally catching up with my concept for the "iThink" Apple-branded brain/computer interface.

The Neuralink tech that is being developed by Elon Musk's company uses thread-like electrodes that are embedded into the brain using a device similar to a sewing maching. The threads are implanted directly into the brain, but not directly connected to neurons.

This concept is truly dystopian & frightening to many people, but I think it is the next logical step in the "meta-volution" of the human mind.

As much I love the natural world and feel like it is good to disconnect from the web & devices from time to time, the organic structure of the brain will soon need to be augmented beyond the external digital tools we are currently using. The rate of digital information flow and capabilities of A.I. are just advancing too quickly for biological evolution to keep up.

Some of the abilities that could result from tech like Neuralink are:

• Virtual or augmented reality that is directly experienced in the mind

Yes, this technology has the potential for negative uses (mind hacking, unwanted advertising, inability to disconnect)... but ALL tools have that risk. This is the danger that sci-fi classics such as Star Trek's "Borg" and The Matrix have tried to warn us about. However, the same tools that could be extremely dangerous also have the potential to create amazing beauty & benefit for humanity.

"The level of intelligence has been tremendously increased, because people are thinking and communicating in terms of screens, and not in lettered books. Much of the real action is taking place in what is called cyberspace. People have learned how to boot up, activate, and transmit their brains.

Essentially, there’s a universe inside your brain. The number of connections possible inside your brain is limitless. And as people have learned to have more managerial and direct creative access to their brains, they have also developed matrices or networks of people that communicate electronically.

There are direct brain/computer link-ups. You can just jack yourself in and pilot your brain around in cyberspace-electronic space."

Below is the Apple iThink concept that I envision back in 2009: 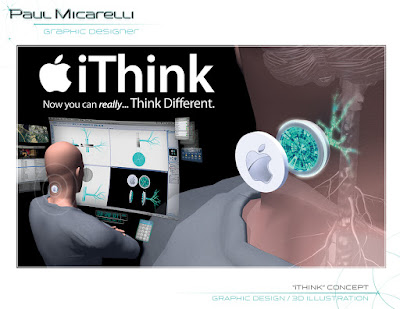 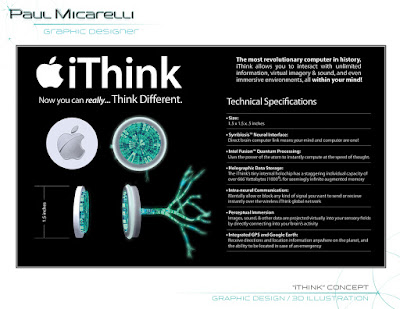 "Adam and Eve" by Alexandr Kumpan

There's nothing I love more than seeing an image that stops me in my tracks & makes me think "....WTF?!?"

This illustration by Alexandr Kumpan that I saw on r/ImaginaryMindscapes did exactly that - with alien creatures that look like a cross between xenomorphs + jellyfish taking on the roles of Adam & Eve, consuming some strange forbidden fruit. This is just one of the artist's collection of disturbingly psychedelic images.


"Adam and Eve"
by Alexandr Kumpan 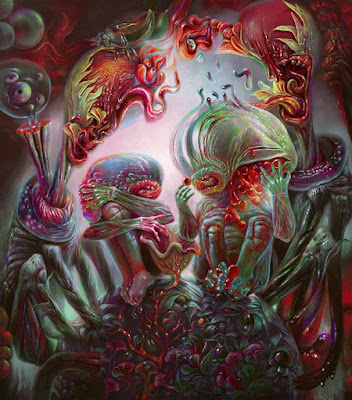