Recently, I've been posting a lot about the cosmos & space travel. The Star Wars movies have been a major creative inspiration throughout my entire life, and one of the reasons why I'm so interested in space.

The short trailer has alot of iconic elements- the Millenium Falcon, X-wings flying in formation over water, the unforgettable sound of TIE fighters, personable droids, & mysterious Sith with a unique red lightsaber. It re-ignited the feeling of excitement & nostalgia I've had for the Star Wars saga since I was a child.

I'm sure I'll be able to pick apart the upcoming movies & find plenty of flaws in them. However, the idea of new movies, that includes the original cast as older versions of their characters, is undeniably awesome for any Star Wars fan.

The millions of hits that the trailer is getting in a single day proves that the Star Wars saga is as relevant as ever. Hopefully, the first movie of the new trilogy can live up to the hype & anticipation.

I'll be anxiously awaiting Episode VII when it's released in 2015.
Posted by paul_mic at 5:00 PM 1 comment: 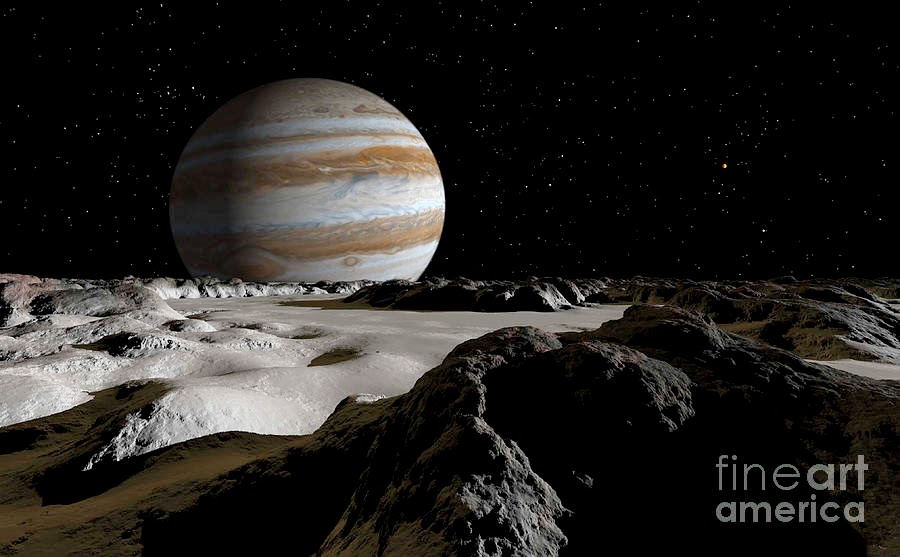 I recently came across the fantastic 3D artwork of Ron Miller. His work was featured by LIFE magazine.


LIFE
Out of This World:
Ron Miller’s Spectacular Space Art

His creations are computer rendered depictions of other worlds & scenes throughout the Universe. He has included all the major bodies of the solar system, but also hypothetical space environments on extra-solar planets.

I have made many 3D space scenes myself, that I'll have to post soon.

Here are a couple more images, but definitely go to the website to see more of this amazing work: 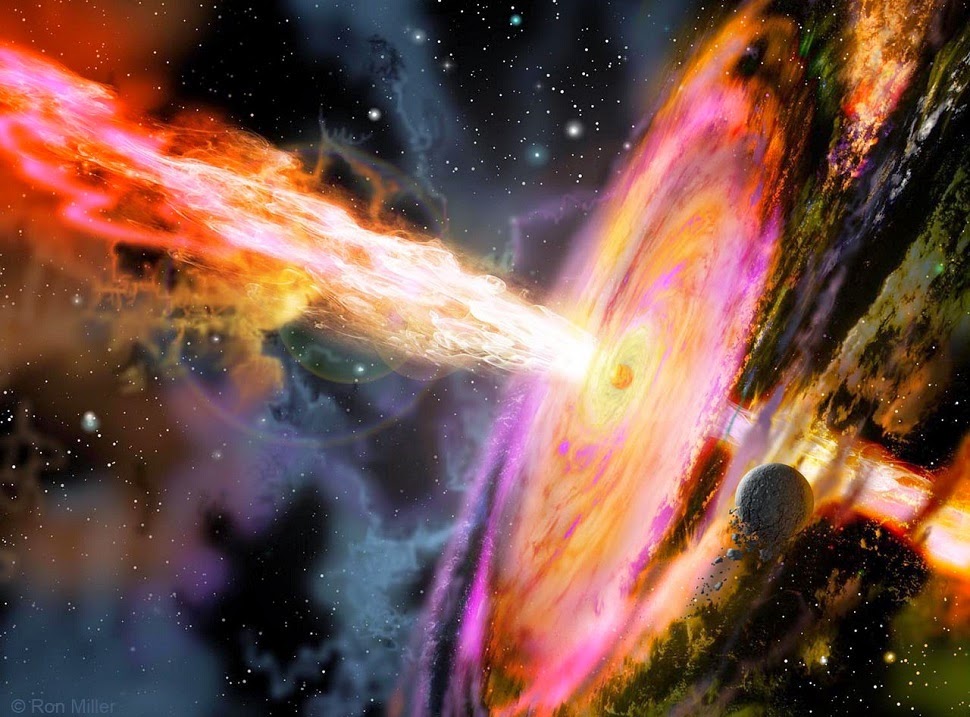 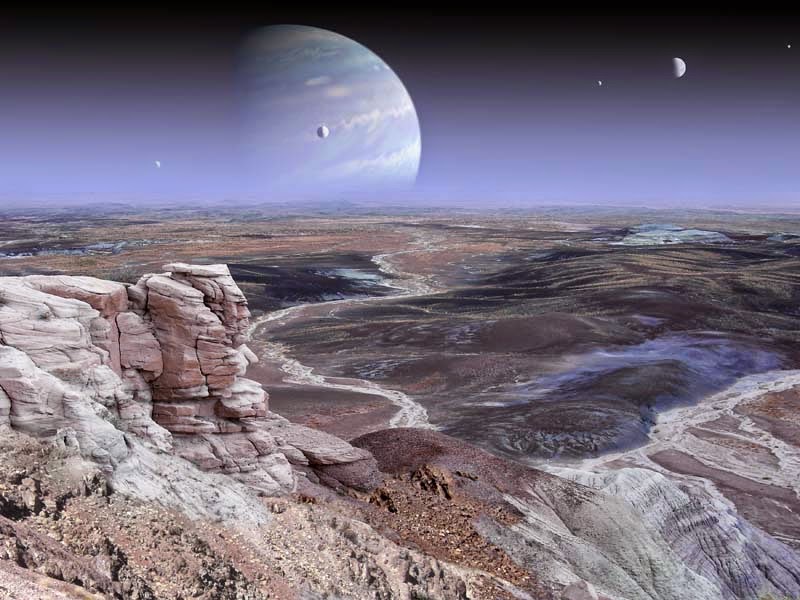 This insane item I saw on fUSION Anomalog is pretty much the definition of bad packaging and horrible product design. 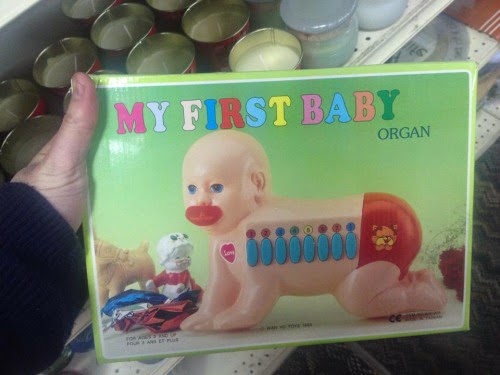 This is a cool video I saw on Neatorama, showing various everyday activities, as seen through "thermal vision" similar to the alien in The Predator movies.

The camera picks up energy in the infrared wavelength. This energy isn't in our range of visible light (which is a tiny slice of the overall electromagnetic spectrum), but we perceive it as heat.

There is some NSFW material in the video, but it's an interesting look at the energetic information all around us, that we cannot perceive. Using technology, we will be able to experience more of these aspects of reality that are currently hidden from us.

RIP, Creator of "Choose Your Own Adventure" 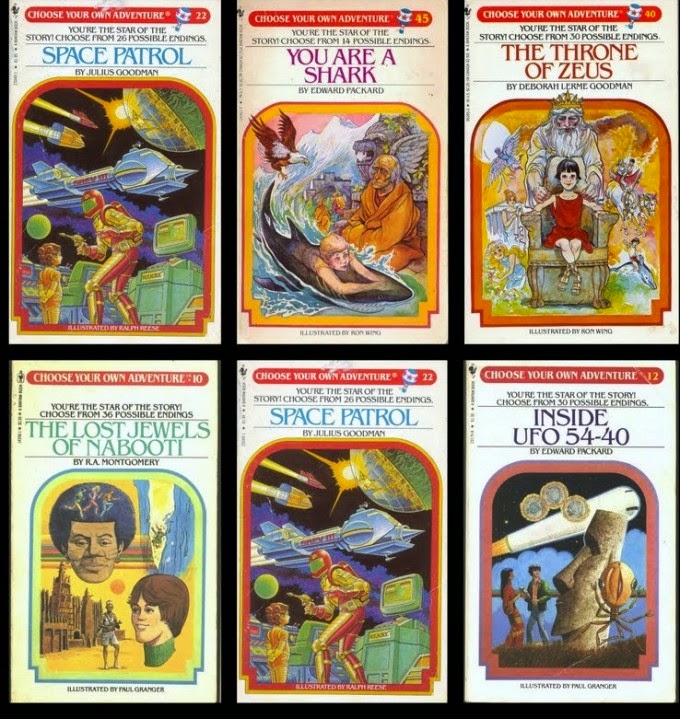 I recently found out that the R.A. Montgomery, creator of the interactive book series, "Choose Your Own Adventure" passed away.


Creator of “Choose Your Own Adventure” Books
that Influenced Games, Online Culture has Died

Hearing this news brought back memories of my years in elementary school, when I used to love reading any of these books I could get in our school library.

The "Choose Your Own Adventure" series was a novel approach to the medium of printed books. At frequent points throughout the story, you could choose different paths by turning to different pages for various decisions regarding the plot.

I would often 'cheat' while reading a "Choose Your Own Adventure" book, by skimming ahead through the thread of pages for a certain choice, to see what the eventual outcome would be. However, I still enjoyed reading through the story to see where my decisions would lead me.

These books were innovative & inspired a generation of young readers. It was a truly memorable series with imaginative themes. "Choose Your Own Adventure" helped shaped my young mind with a sense of creativity & awareness of the importance of choice.

Hopefully this isn't in bad taste, but the news of the creator's death also reminded me of this humorous, but accurate, parody cover- 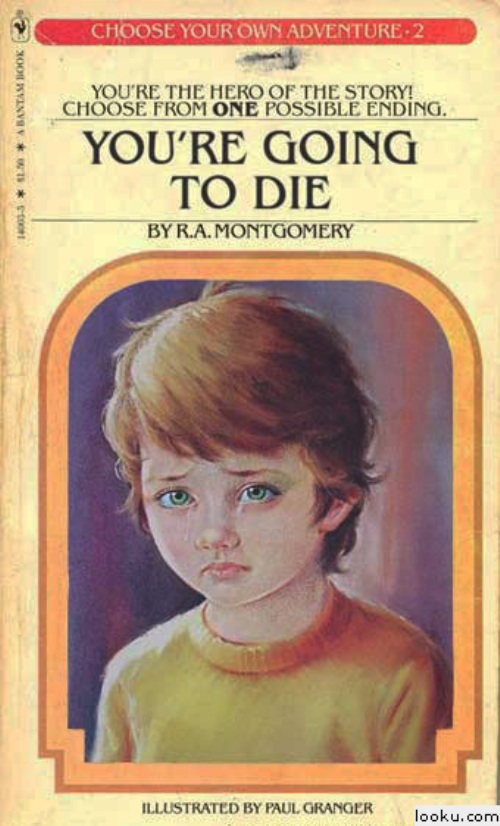 I saw this funny graphic on Lifehacker that attempts to clarify the vague instructions that graphic artists (like myself) sometimes get from clients.

One of the little-known requirements of any graphic arts career is that of being a mind-reader! You have to intuitively be able to understand what your clients are trying to convey to you. Sometimes this is actually the most difficult part of the job, since you cannot progress on a project without figuring out what the client really wants...

For the first time, the human race has landed a space probe... on a comet!

The mission was actually launched 10 years ago & the lander finally touched down today.
Thanks to brilliant scientists & engineers, we have made contact with a 3-mile wide comet, 67P/Churyumov-Gerasimenko, that orbits our sun.

This event will open the door to deep-space mining & other technologies that will eventually allow us to travel to other planets & stars.

The animation below shows the circuitous route the Rosetta probe had to take to get to the comet. It used planetary gravity to save energy & went into hibernation for a couple years as it approached it's target. The planning & understanding of orbital mechanics that went into this is mind-blowing.

This is an interesting list of toys that were not very safe for the kids playing with them:


24 Dangerous Toys From Past and Present

Many of the toys on this list were mostly dangerous only if the child or parent were irresponsible. Some, however, had serious defects that could cause injury.

Out of these toys, the only ones I had as a kid was a science lab (without the uranium), cap guns, & a Pogo Bal (Yes, I checked, it's spelled "Bal"). The Pogo Bal was basically just something for kids to jump around on. It wasn't really that dangerous... unless you were very uncoordinated.

First Glimpse of the Seas of Titan

Space is one of those subjects that I loved as a child, but have even more appreciation for as an adult.

The thought of infinite stars, and worlds of endless variety, puts our own lives sharply in perspective.

I think science fiction, whether it be books, TV, or video games, has greatly contributed to the imagination of what lies beyond our own planet. I'm playing Mass Effect 3 right now, to finish one of the most amazing fictional series that I've experienced, in any medium. These works of art help us envision humanity's place in the galaxy, and to imagine the many worlds and forms of life that may exist throughout the Universe.

When I saw this picture on Neatorama of Saturn's moon, Titan, it immediately instilled that sense of wonder from seeing a new world & imagining the human experience of being there, in person. 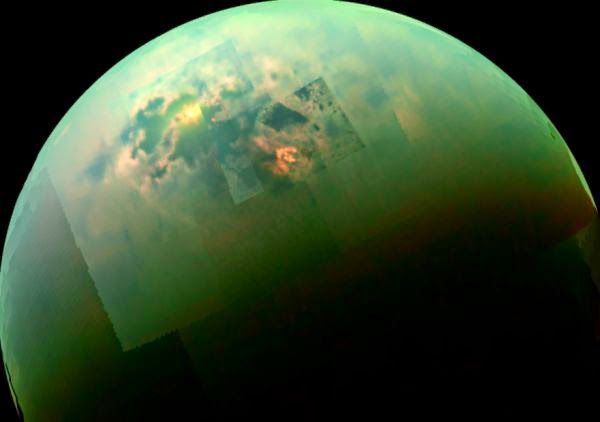 The image, taken in the infrared wavelength, shows the sunlight reflecting off Titan's polar seas, which are mostly liquid methane & ethane.

I can imagine myself floating in a capsule over this alien ocean & taking in the sight of the environment of another world. Who knows what amazing environments exist on other planets & moons? I wonder how many of these will one day be seen by humans eyes...

Here is a 3D visualization of the surface of Titan, by artist Steven Hobbs:

Despite the power shift in the elections on Tuesday, it's good to know that politics in the USA is as crazy as ever.

On BoingBoing, I saw this humorous example of the right-wing's sense of religious entitlement backfiring on them.

The "monkey god" statue is that of Hanuman, the ape-faced Hindu deity who I used as an avatar for this blog for awhile.

Christian lawmakers, in Republican-controlled Oklahoma, wanted the 10 Commandments to be placed on the grounds of the state capitol. Therefore, they passed a law allowing religious displays on public property. Since the state constitution declares that all religions should be treated with the same respect, religious groups such as Satanists & now the Hindus are petitioning to add their memorials to the capitol grounds.

This is a perfect example of the perils of choosing ideologically-driven fundamentalists to govern, using their personal beliefs (instead of common sense & logic) as a guide. They tend to think of personal & religious freedom as the "freedom to do things that we agree with." They want these freedoms for themselves, but will resist others expressing their own beliefs.

The idea of religious freedom, that this country was founded upon, means everyone being able to believe & worship as they choose, uninhibited by the government. However, this principle of religious freedom also means not having any one religion favored by the government. Unfortunately, hard-right conservatives prove time & time again that they can't deal with the idea of people thinking & living differently than them.

For some reason, when I subject myself to FoxNation or other insane right-wing message boards, I always see people frothing at the mouth at how "liberals" are so intolerant. This is the ultimate form of projection, as it is the rigidity of conservatism that is antithetical to the tolerance of other viewpoints & perspectives. True liberals/progressives may think your beliefs are ridiculous, but would not usually try to ban you from expressing it.
Posted by paul_mic at 8:38 AM No comments:

Yesterday was Election Day, and it looks like the Republican party has gained seats in the Senate, to take control of Congress.

I am registered as an Independent & have no love for either political party, but I tend to see the GOP as a more regressive force in modern national politics. This is because their ideology is openly anti-government, so their agenda usually involves making government worse instead of better, while pushing to privatize public services.

Despite the fact that Republicans in the House & Senate have caused much of the political gridlock in DC over the past cycle, the voters mostly place the blame on President Obama & the Democrats for the nation's problems.

I can understand people wanting to change the dynamics of the government if things aren't working. What I cannot understand is how voters can keep re-electing people that are as repulsive as human/turtle/asshole hybrid Mitch McConnell, who has stood for nothing except opposing the President on all matters & enriching his wealthy donors. There are sleazy Democrats, too, but the fact that voters re-elect people like McConnell just boggles my mind.

Because it has the highest ratings out of the entire cable news cesspool, there is no doubt that Fox News (aka. 'The Mainstream Media') has affected the perceptions & opinions of America's voters. I hear people's arguments against the President & for the GOP, and it's clear they are just regurgitating talking points from the right-wing Fox spin machine.

It's funny seeing conservatives think there's going to be some kind of "American revival" now. If anything, the next 2 years are just going to be a bigger shitshow than ever. It's going to be gridlock on steroids.

Republicans love to bitch & complain about how 'progressives' and 'socialists' are ruining the country, but they are completely incapable of creating meaningful legislation that helps the general population. The public is about to see the conservative agenda in action, and it won't be pretty.

I'm sure we'll be seeing Republican bills being sent to the President that:

We'll have to see just how bad things get over the next couple years, until the next election.

Until then, I'll just be continuing to live my life and trying to do my part to make the world better.

I still stand by my progressive outlook on politics & the perspective of this graphic I made awhile back, showing the "Political Spectrum": 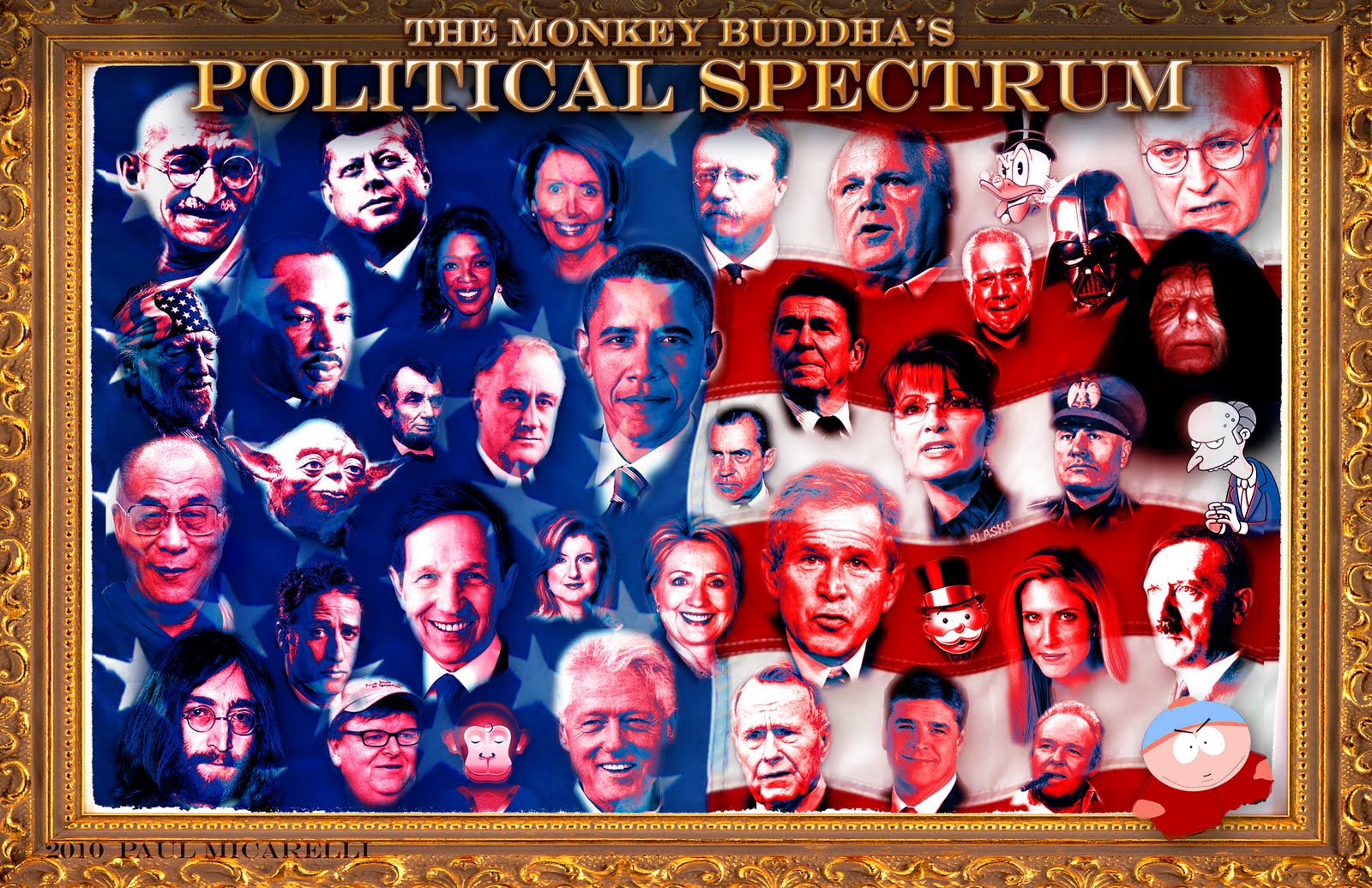