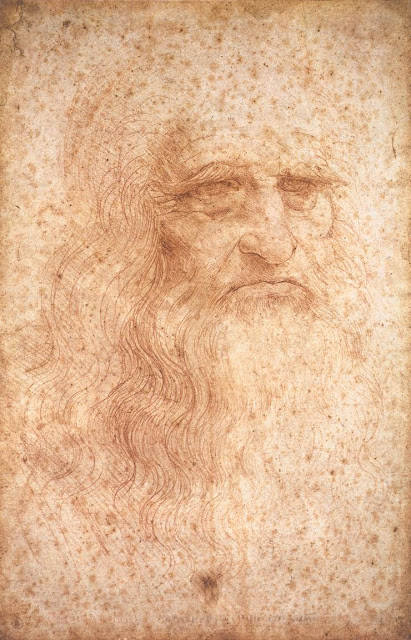 One of my first book reports in elementary school was on an autobiography I read about Leonardo da Vinci.

Ever since then, Leonardo's genius has probably been one of my biggest historical inspirations- in both my creative career & my life-long quest for knowledge about the world.

The game "Da Vinci's Challenge" was titled to reflect Leonardo's study of the Flower of Life symbol on the game board, but also is an homage to the legendary Renaissance Man.

I actually finished reading my very first e-book on my iPhone recently,

"Thoughts on Art and Life"
by Leonardo da Vinci

It was very interesting to read into the thoughts of such an insightful mind. However, some of the things he wrote about were kind of petty, for such a lofty genius. For example, he wrote several lengthy rants about how painting was superior to just about any other creative endeavor- ie. sculpting, poetry, music, etc. This is entirely subjective judgement, & I was surprised he spent so much time arguing the case for such a meaningless opinion.

Anyway, it was good read to get perspective on how his mind worked.

In 2003, I got to see an exhibition of da Vinci's drawings & notebooks at the Metroplitan Museum of Art. I soaked up the experience of being in the presence of so much of The Master's work.  It was something I'll never forget.

Here are some links with the amazing range of work by Leonardo da Vinci:


The Drawings of Leonardo da Vinci


New Scientist:
The Real Leonardo was More Impressive Than the Legend

Finally, here's a video highlighting some of his revolutionary anatomical renderings:

This is what happens when a philosophizing ape looks too deeply into into his own existence, 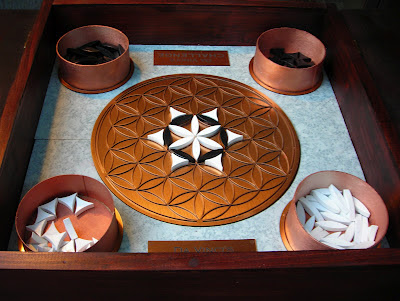 The "Deluxe Version" of Da Vinci's Challenge:
made using laser-cut plastics that look like copper & stone.

As a professional designer, I've been lucky to work on a wide range of fun & interesting projects.

In my creative career, the creation I'm most proud of is the award-winning strategy game I invented & developed as a senior design student at Rowan University.

It's called "Da Vinci's Challenge": The Classic Game of Secret Symbols" & I've posted about it alot on this blog.

The design of the game board is a symbol known as 'The Flower of Life'. This pattern of interlocking circles has been around since the dawn of civilization. The Renaissance Man himself, Leonardo da Vinci, studied the Flower of Life's geometric form, which is why I named the game after him. There are many examples of The Flower of Life motif in art & architecture around the world.

I am currently in the process of working toward creating digital version of the "Da Vinci's Challenge" game. I'd like to have at least an iPhone app developed, so I am trying to get a Kickstarter campaign together to raise funds for the cost.

To get some presence in the digital world, through social media, I recently started an official Facebook page for the game. I will use it to post reviews, pics, & interesting info related to "Da Vinci's Challenge".

If you are on Facebook, or know people who are on it, click the link below & please give the page a Like. Spreading the word about & sharing the link that would be helpful, too!
Official Facebook Page:
"Da Vinci's Challenge"

(The page is public, so anyone can just close the log-in window if it pops up.)

Hopefully I can the ball rolling before the end of the year, so I will be posting updates here & on the Facebook page regularly.
Posted by paul_mic at 10:07 PM No comments:

This is the last of my "Logo"-themed posts for the night...

I came across this article featuring clever and well-executed corporate logos - designed in the style of a competing company!

They are all very well done & are probably amusing to most design geeks, such as myself. 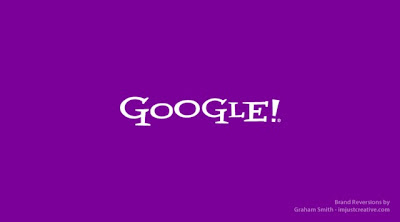 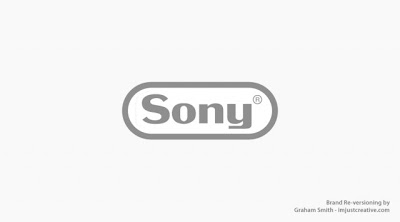 Since I started on a logo & branding kick with my Microsoft post, here's a humorous look at what snacks would be called... if their brand names were honest.


Honest Names For Our Favorite Snacks 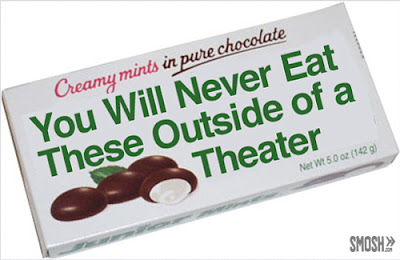 I love anything mint.... 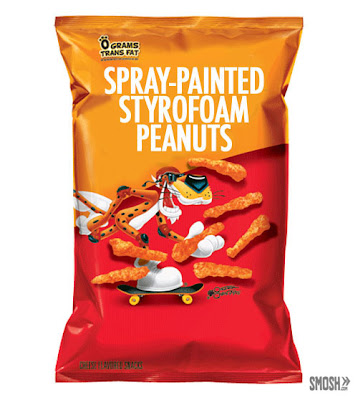 ...but Cheetos are friggin' gross. That really is an accurate description.

The first 'real' PC my family bought in the early 1990's was a crappy machine running Windows 3.0 with DOS.

Ever since those days of primitive computing, my disdain for Microsoft products has only increased.

Thankfully, in college I began using Apple computers for my design classes. Now, I use Macs for work & home, and I also recently bought an iPhone. My digital experience is now wonderfully seamless & hassle-free, in a way that was unimaginable 10-20 years ago.

Although I avoid using Windows computers like the plague, I wanted to comment on the new Microsoft logo that was recently unveiled.


What Do You Think of Microsoft’s First New Logo in 25 Years?

Don't worry, I'm not going to waste too much cyberspace saying alot about it.

Basically, the new branding is predictably lame, uninspired, boringly corporate, & just 'blah'... like the company itself:

Yeah I understand how it relates to "the company's shift of focus from the classic style to the tile-centric modern interface."  It's still bland & completely lacks any soul.

The latest iteration above, though it's modern-looking, sucks the little sense of whimsy or originality out of Microsoft's corporate identity:

Although I appreciate simplicity in design, "simplicity" & "design" are things that Microsoft has never done well.

The original Microsoft logo, below, might be the craziest... & therefore the coolest- 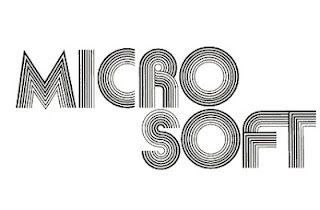 The Conveyor Belt of Life

Don't let this happen to you.

Jump off the conveyor belt & try to live a little on your own terms.

Take a deep breath & appreciate this moment in which you are alive... while you still have the opportunity. 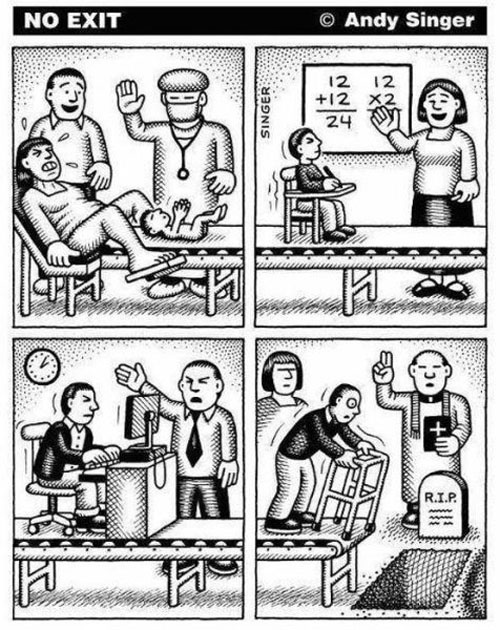 Our Story in 2 Minutes

One of the wonders of modern technology is the ability to easily visualize scales of time and space that were previously unimaginable.

This is a video made by a high school student that takes the viewer on a trip through the history of the Universe, culminating in our recent human history.

It's a great visual expression of the rich cosmic & historic legacy that all of us human beings have inherited.


Our Story in 2 Minutes 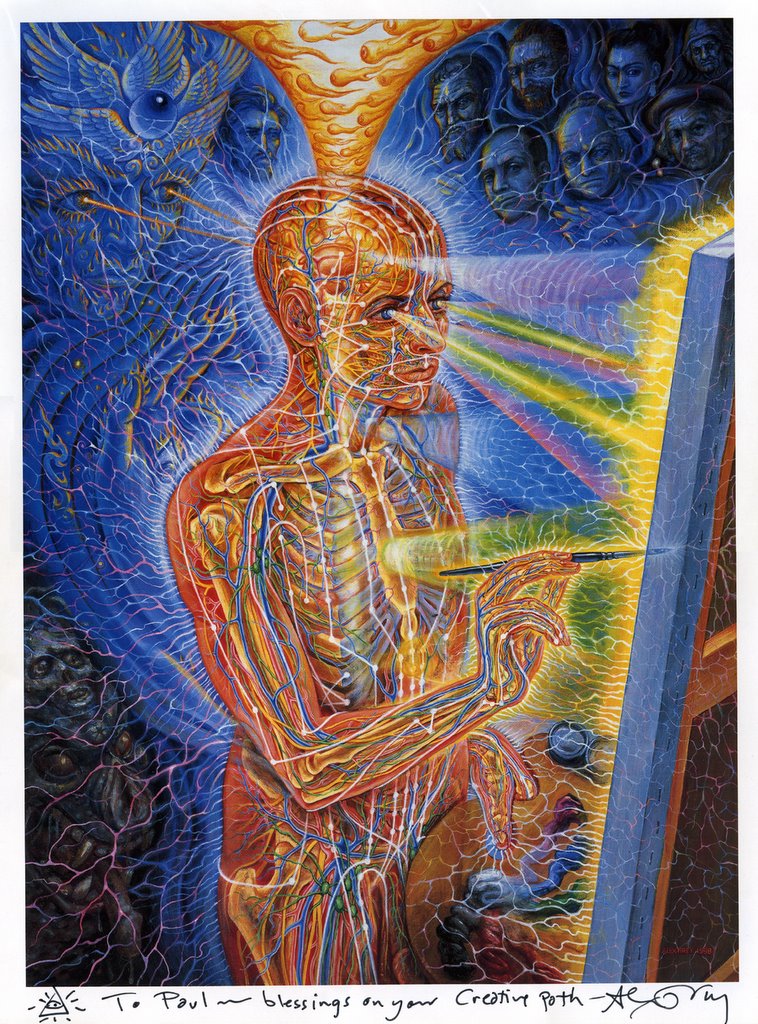 This weekend my brother sent me a link to this interview with the master visionary artist, Alex Grey:


Reality Sandwich
Nets of Being: An Interview with Alex Grey

The article describes his unique style of art very well:

Alex Grey & his transcendental visions have inspired me for many years. His work never stops instilling a sense of wonder about the profound mysteries of reality & the human body.

I had the privilege to talk to him & his wife Allyson after one of his multimedia lectures in Philadelphia back in 2005. It was amazing to meet someone whose work I admired so greatly.

He signed the picture, called "Painting", at the top of this post, which I still have it on my desk at work.

I saw this classic Stephen Colbert rant on my Facebook feed, about the dangers of monkeys intermingling with bears - nature's 'godless killing machines'.

Then on Picture is Unrelated, I came across this crazy animated GIF with a cymbal monkey surrounded by angry bears. It made total sense to post these 2 items together... so here they are! 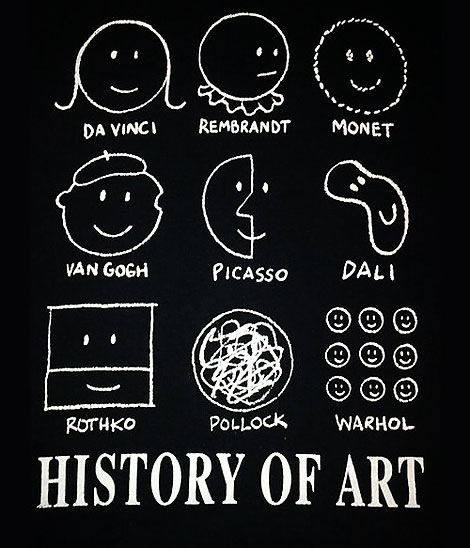 I recently saw this article on Neatorama about a study suggesting that artistic people are happier with their careers than workers in other fields:

Any profession that allows a degree of creativity will be rewarding on some level.

I feel fortunate to have a successful career in graphic design, because I've always loved observing & making visual art.

However, I also try to venture into other types of projects for the sake of creative exploration. An artist with a wide breadth of vision can express ideas through any medium.

Despite the long history of disturbed artists, expressing one's inner vision & bring forth new things into the world is a joyful & fulfilling experience (...for those of us who are not completely crazy).

Not much to say about this, it's just awesome.

This is how I feel when enjoying a holiday... 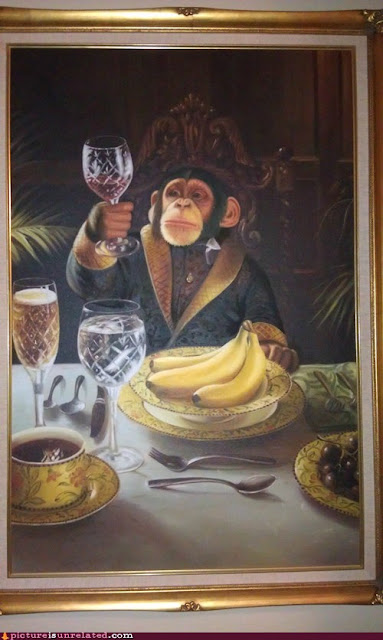 Seen on Cheezburger
Posted by paul_mic at 12:38 PM No comments:

Even though I haven't really had a chance to played video games lately, I had a little time over the holiday weekend to play some PS3 w/ friends. I've been a casual gamer since I was 5 years old, so I've seen plenty of systems & titles in my time.

Now my nephews, nieces & friends' kids are starting to play video games on iPads & the traditional console systems. Luckily, I'm from a generation that doesn't feel like one should give up something they enjoy just because they're getting older.

I came across this video on Neatorama that starts out with Pong & Atari, then works its way through the many memorable games over the years to virtual reality-like quality of the current-gen consoles.

Some of my recent favorites that are featured in the video include; Dead Space, Batman Arkham Asylum, Assassin's Creed, & Bioshock.

There's no dialog or identification of the individual titles, just a visual trip through the development of the art of video games.

A Brief History of Video Games