I just posted about my appreciation for monkeys & their antics. Comedy is another of my favorite aspects of life & Joe Rogan is a very funny dude.

I've posted about his standup act before:

I was browsing the blog Teleomorph & saw some good Youtube clips of his recent comedy special with a title after my own sensibilities...

The Teleomorph also linked to some more Crazy Wisdom from Joe Rogan... talking about Terence McKenna & his mind-bending 'Stoned Ape Theory'.
Posted by paul_mic at 6:07 PM No comments:

Obviously, monkeys are a favorite topic of mine & I've posted about them alot here.

Many times, I find examples of monkeys doing human activities that give me a good laugh.

This Youtube clip I saw on Neatorama, though, just makes me jealous. These monkeys are getting free drinks at a tropical location on a beach full of hot women in bikinis every day.

Our hairy relatives prove that decadent beach living is not just for humans... 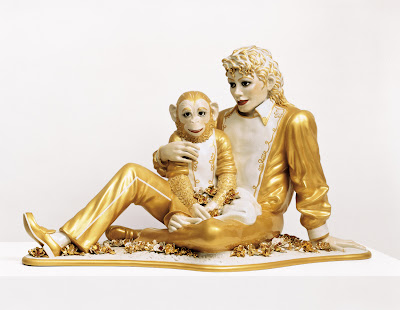 "Michael Jackson and Bubbles"
Jeff Koons
Well, I was driving to Sea Isle City last night after work & the lady DJ on one of the radio stations was sobbing uncontrollably on the air while breaking the news about Michael Jackson's death.

It's weird how people can be so affected by someone they never met or even seen in person... but especially with today's media, making a personal connection to a popular figure is just human nature.

Michael Jackson's Thriller was the very first album my parent's ever bought for me when I was about 5 years old & I listened to it all the time. As I also just posted recently, the Thriller music video scared my ass off as a kid in a way I'll never forget. Hearing all his songs being played the radio again is a reminder of what a legend he has been in the world of music and entertainment.

As one of the most iconic people in the world, and as someone with such a 'unique' personality & life it was unavoidable that he became a caricature in alot of respects. Not only was he eccentric and creative in his own right, but he inspired (for better or worse) other artists to comment on his phenomenal existance.

For example, when I first saw the sculpture pictured above, I simply thought of Jeff Koons' "Michael Jackson and Bubbles" as a humorously ridiculous piece. However, I have come to recognize it as an image of sublime beauty and deep meaning about the illusion of appearances and the mysteries of nature, fame, mortality, and the idea of a " True Self". Besides, the very concept of a porcelain & gold statue of Michael Jackson with Bubbles the chimp is absolute craziness that ascends to the level of genius. Wacky art & monkeys are two things I can truly appreciate.

On the other end of the spectrum is the completely awesomely disturbing episode of South Park titled "The Jeffersons," in which Jacko tries to disguise himself & his children while in South Park- to both hilarious and horrifying effect. The most insane part of the episode is where his face starts falling off & he chases the kids like a Thriller zombie. Watching it the first time I don't even think I could laugh because it was so over-the-top.

Michael's appearance must have been the most torturous part of a life in which his image predominately defined the public's perception of him. It is impossible to comprehend the triumphs and the troubles he faced during his time, but it is definitely fascinating.

Audio Interview:
Science Weekly with Michio Kaku:
Impossibility is relative
On io9.com I saw this excellent gallery of sci-fi spaceships from many different stories & media.

The designer in me loves studying the different possibilities, with their many pros & cons.

The Evolution Of Space Cruiser Design:
A Gallery
I posted before about an interesting spaceship size comparison chart, where I first revealed the incomprehensible nature of the "Monkeybuddhasphere™":

The Monkey Buddha:
Sci-fi Info-graphics
This is one of those areas where art & the creative fields can inform the intellectual efforts of scientists and engineers.

By pre-conceptualizing the possible forms of things like interstellar transportation, these design ideas can be applied to emerging technology- like this brilliant concept that this guy totally stole from me:

Lebanon Man Designs
Magnet-Powered Motor
At an ever-increasing rate, popular science is catching up to the ion engines of TIE fighters & the hyperspace drives of more elaborate vehicles.

Of course, it is entirely possible that the form & function of space-faring craft has already been perfected... 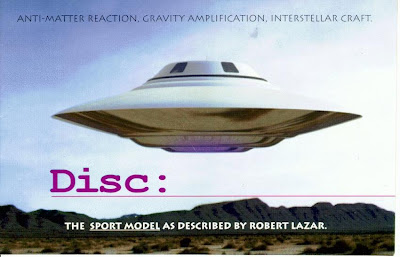 Continuing on the theme of Childhood Lizard Memories....

One of the countless things I used to collect as a kid was the series of trading cards called "Dinosaurs Attack!"

These were really graphic, had dinosaurs, dealt with crazy sci-fi stuff... & therefore was totally cool back when I was in grade school.

I found a great site that has scans of all the cards, front & back. I recommend looking at every single mini-masterpiece.

Bob's Dinosaurs Attack! Homepage
Like "V", the story behind these cards involves the influence of humanoid Saurian creatures.

One of my favorites that I had was this one- Ripped Out of Time, with a dinosaur's face getting peeled off due to some kind of tear in space-time: 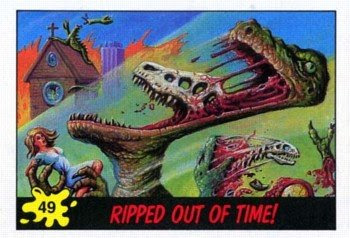 Another memorable image was the back of "The Ultimate Sacrifice" with a truly touching portrayal of the scientist's agonizing demise: 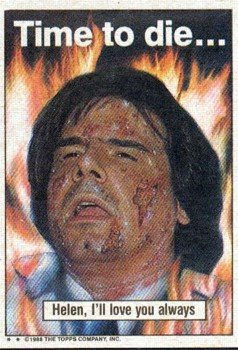 I didn't have this particular one, but the Dinosaur Satan from the card "Supreme Evil" is a horrific drooling gem: 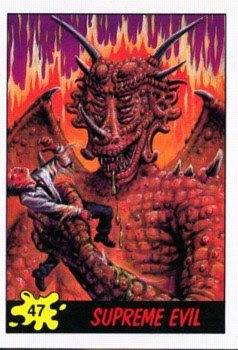 When it comes to truly frightening childhood TV-related memories, there were exactly three that I can remember instantly...

1) Watching Michael Jackson's new video, "Thriller" when I was 5 years old. When the zombies came creepin out, I was really frightened. When Michael's eyes turn into wolf eyes, I almost ran out of my friend's house.

2) "The Empire Strikes Back" for the first time on the TV at my grandmother's & the scene where the Wampa ambushes Luke scared the living crap out of me.

3) Finally, the one scene that completely freaked me out was from the series "V"...

The premise of the show was that human-looking aliens come to Earth with promises of peace & progress. However, the "V"isitors are actually malevolent Reptilian bastards out to steal our resources, while eating our apparently delicious flesh.

"V" was basically a pop-culture version of David Icke's take on The Reptilian Connection.

After seeing a new trailer for the ABC remake of the "V" story, I went looking for the scene from the original that I thought was so horrible as a kid.

Although the aliens consuming rodents was disgusting, the most traumatizing visual for me was "The Birthing Scene" in V: The Final Battle.

I was about 6 and my Mom was working at night, so my Dad was letting me & my younger siblings watch this wacked-out show about evil lizard people. When this scene came on, I went ballistic & started screaming for my Dad to turn the TV off. I wasn't crying, but I refused to look at the TV until a different channel was on. As a result, I never even saw the unbelievably awesome second baby being born...

Looking at it now, it's obvious the special effects are borderline ridiculous. I even remember my Dad laughing & saying it wasn't even scary, but as soon as the first baby's tongue flicked out, that was it for me. 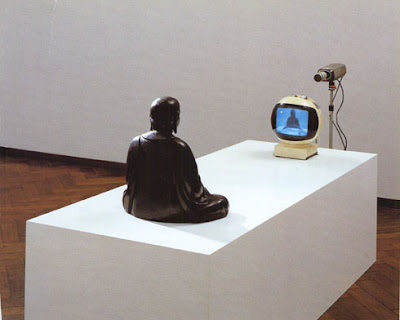 Since this blog is mostly a reflection of my own interests, for this particular post I found subject matter that deals with the ideas of connectivity & awareness of "The Self" (whatever that is).

While browsing through Ffffound! I saw the above image, a meditation on experiential reality. It suggest the mind and universe are part of a single, perpetual feedback loop.

The allusion to 'mind' and 'circuits' makes me think of The Eight Circuits of Consciousness theory.

This installation was actually created in 1974 & called 'TV Buddha' by Nam June Paik.
Posted by paul_mic at 10:50 PM No comments:

I'm always impressed by the wisdom of many of the founding U.S. politicians, especially in comparison to the unsettling number of absolute cretins in the government today.

For my brother's graduation w/ a history degree I got him a book of quotes by the 'Founding Fathers'. Their insights were so direct and rational in a way that is very rare nowadays in DC or the media.

I saw this BBC article mentioning the 200th anniversary of Thomas Paine's death at age 72.

BBC:
"Who was Thomas Paine?"
After reading Thomas Paine's 'Common Sense', 'Right's of Man', as well as 'The Age of Reason', I could instantly appreciate the fundamental principles that Paine was describing. He is still a main source of political inspiration for me.

Although it's been 200 years, his core ideas of intellectual liberty, pragmatic rationalism, & populist democracy are timeless.

“The world is my country,
all mankind are my brethren,
and to do good is my religion.”

-Thomas Paine
Posted by paul_mic at 9:44 PM No comments: 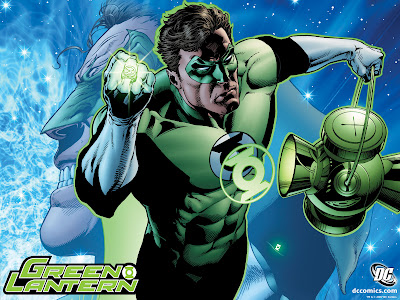 The Green Lantern is the superhero I've always considered have the coolest powers. My favorite color is green & black, so the Green Lantern uniform would work for me, too...

Being Superman would obviously be pretty awesome, but everybody knows that

Superman is a Dick
Anyway, this trailer for an unrealized Green Lantern movie was created from snippets of other movies, but looks pretty awesome:

A Dream Within a Dream

I saw a link to this gallery on BoingBoing:

National Geographic
"Space Monkey Pictures"
It's really strange to think that the first creatures to travel off-planet (that we know of) were actually monkeys that we strapped down into rockets.

Maybe I'm too empathetic, but all I think about when I see these photos is how they must feel like 'alien abductee' experiences. There are these scary beings, placing an innocent creature into machines that it doesn't understand- and forcing it into terror of the unknown.

In honor of these furry & unwitting cosmic pioneers, I almost named this blog "Space Monkey" or something crazy like that. 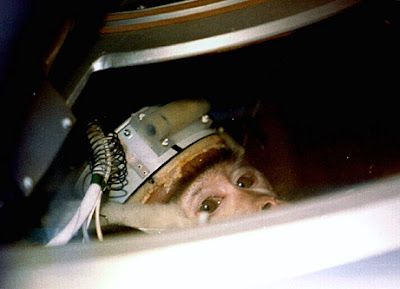 The Secrets of Alchemy 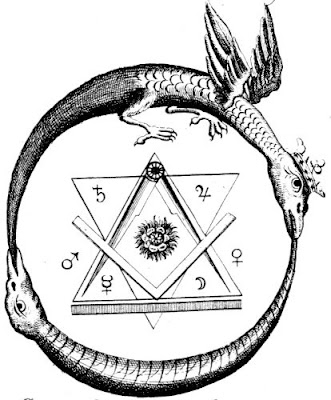 "Alchemy is an expression of the fact that light is hidden in darkness."

Alchemy is one of those areas of knowledge, like astrology, that has mostly been considered an 'unconventional' idea system. In fact, alchemy was a precursor of modern science and is literally "The Great Work"- ultimately a transformation of one's own mind & state of being.

Like a complex visual & mental puzzle, trying to understand the myriad meanings behind any alchemical works can be an almost absurd task. Even for someone well-versed in art history and symbolism, trying to figure out the story behind the symbols can be mind-boggling.

A while back I got the book Alchemy & Mysticism, The Hermetic Museum that is filled with esoteric art. Although I often browse through the strange imagery with a basic idea of what is behind some of it, it's still a very obscure system of thinking.

I saw this article on Reality Sandwich and it has several excellent observations:

The Sacred Art of Alchemy
"Contemplating an indescribable divine mystery, according to Jung, "the alchemists did not really know what they were writing about," certainly not with their conceptual mind. Not knowing what they were trying to articulate, the unconscious itself was simultaneously living through the alchemists as it revealed itself to them.

This explains the alchemists' oftentimes confusing, contradictory, and inscrutable description of their art.