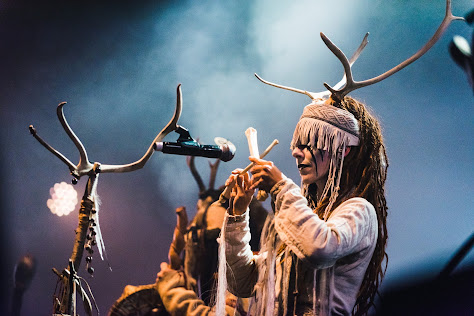 It's not often that I experience new music that completely blows me away. However, I was recently putting my son to sleep, feeding him a bottle & rocking him while playing songs that I've bookmarked for him on YouTube. After finally getting him to sleep with a relaxing instrumental track of Eastern zen-inspired music, I was scrolling through the recommended videos... & stopped at a live performance that looked interesting.

As I started listening to it, I was enthralled by the droning sounds & rhythmic drumming. It looked & sounded like an ancient shamanic ritual. Having a deep interest in the spiritual & artistic dimensions of early human culture, the performance immediately piqued my interest. Then, the lead vocalist Maria Franz (who looked like a nature shamaness, donning antlers reminiscent of the Cernunnos on the Gundestrup Cauldron and veiled eyes, clicking bones together) began to sing.. & I was like, "Woooooahhhhh!"

Then some other crazy male medicine man figure, Kai Uwe Faust, began growling in an animalistic call & response. I paused the video, put my soundly snoozing little son in his crib, grabbed my headphones & invoked the plant medicine to open me up fully to this new auditory experience. 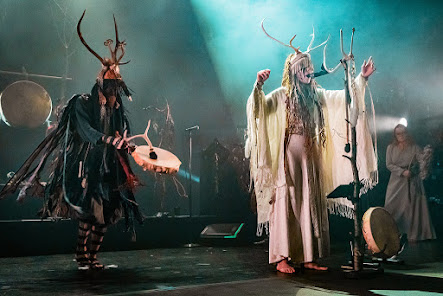 The band I had discovered was Heilung, which means "healing" in German, and they are a neo-pagan return to primal music that reverberates deep into the soul, connecting us to our distant ancestors. In addition to the other 2 members I mentioned is Christopher Juul, a studio engineer & producer who has helped create the otherworldly sound experience of Heilung.  From their own description on Apple music:

Heilung is an experimental folk music band made up of members from Denmark, Norway, and Germany.[3] Their music is based on texts and runic inscriptions from Germanic peoples of the Bronze Age, Iron Age, and Viking Age. Heilung describe their music as "amplified history from early medieval northern Europe". Their music is usually about Norse deities, jǫtnar, and valkyries.

The first video I had watched was a live performance of "Krigsgaldr" & it is fucking awesome. I don't understand a single damn word, other than the English that the medicine man grunts in the middle of the song- but it doesn't matter. The performance, costumes, set, and music itself are all iconic- and evocative of a lost shamanic experience, the mystical perception of nature and that connection to ourselves that draws us back into the ground of being.

I immediately started listening to their other songs, and they have a lot of great music that is thematically unique and technically brilliant. Every time I listen to one of their songs, I'm amazed at the arrangement of language and sound that creates such a magical effect.

Love this one too, "Traust". Just such a great sound:

If these first 2 songs interest you, then definitely check out their other music, too. I'll let the music speak for itself, & it speaks to the remote beginnings of our ancient heritage.

It is such an unbelievable display of artistry on all levels- lyrically, musically, visually, & spiritually. I'm so glad I came across this band and their amazing music; it's a real soul-churning experience that I'll keep coming back to from now on.