Beholding the Terrifying Nature of the Divine On r/TIHI (Thanks, I Hate It), I saw this video of a "biblically accurate angel" specifically one of the cherubim, based on a description in Ezekiel 10:

I looked, and I saw beside the cherubim four wheels, one beside each of the cherubim; the wheels sparkled like topaz. As for their appearance, the four of them looked alike; each was like a wheel intersecting a wheel. As they moved, they would go in any one of the four directions the cherubim faced; the wheels did not turn about as the cherubim went. The cherubim went in whatever direction the head faced, without turning as they went. Their entire bodies, including their backs, their hands and their wings, were completely full of eyes, as were their four wheels. I heard the wheels being called “the whirling wheels.” Each of the cherubim had four faces: One face was that of a cherub, the second the face of a human being, the third the face of a lion, and the fourth the face of an eagle.

The creepy-ass CGI video is by Alex Howard:

Imagine coming across this spectacle while walking along in the wilderness, minding your own business!...

If the descriptions in the Bible described an actual encounter, it's hard to imagine what was actually being experienced - was it an extra-dimensional being, a hallucination brought on by plant entheogens, or some other altered state of consciousness? The description could just as well describe an extraterrestrial spacecraft, seen by someone with a limited linguistic toolkit to accurately convey the information about what they experienced. The other option, of course, is that it's just a made-up story.

The idea of an angel seems to describe a spirit or consciousness beyond our ordinary experience, which can take many different forms. It is not limited to the glowing humanoid with wings, which is usually depicted in Western religious art.

The specific angelic form depicted above, the cherubim, have been portrayed in different ways over the centuries. The traditional artistic representation is almost like the typical angel I just mentioned, but with multiple animal heads: 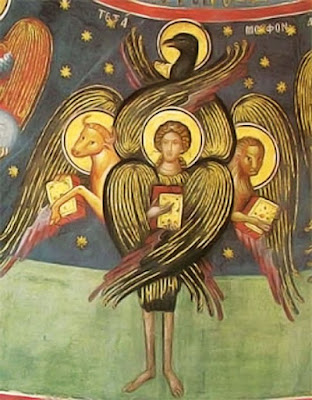 Modern artists have been able to create more abstract depictions more properly conveying the spiritual nature of such an entity: 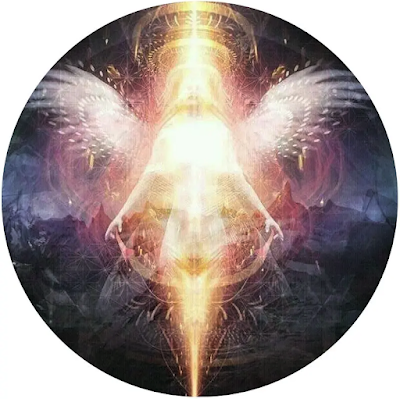 I have never encountered any kind of spiritual, energetic being such as a ghost or angel, so as far as I know, they don't exist. However, I am open the idea there are beings or levels of consciousness that might be outside our realm of experience.

While reading comments on the original post, I saw the video below from The Onion, a one-on-one interview with God. The concept of "God" is an even more difficult one to pin down than angels. God, being the creative force underlying all of Reality, is, by definition, impossible to understand or even singularly experience. It is literally ALL THAT IS, the unity of everything, from the quantum to the cosmic levels, & everything in between.

If someone wants to ask me if I believe in God, I would say that we have to describe what we think God is first. If it's the Old Testament deity, Yahweh, who is a Zeus-like human personality that loves, judges, seeks vengence, etc. & interacts with humans on a personal level - then my answer would be "No," that's mythology.

If we define God as something akin to The Force or the Unified Field, the flux of base, subatomic energy that gives rise to all the patterns of the Universe - then "Yes," of course that exists.

Anyway, I thought this video was a funny representation of how The Infinite would be perceived by a finite human mind. Such awe-inspiring insight into the nature of reality can be approximated in certain altered states of consciousness, when the mind expands outside its normal modes of experience: