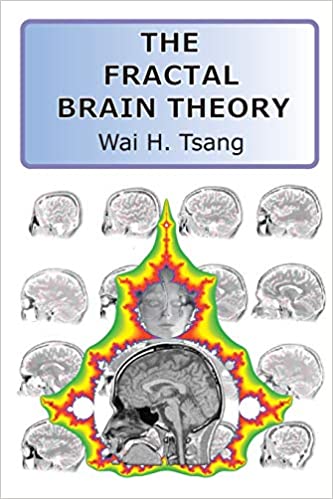 I finally finished reading The Fractal Brain Theory by Wai Tsang, after a long slog of 2+ years. It might be the longest it's ever taken for me to read a book.

I was slowed down by the birth of my son, & having very little time to myself over the past couple years. The book is also fairly science-heavy, with a lot to conceptually chew on, so I would only read a section at a time.

The central premise of the book is that the structural organization of the brain, and therefore the mind, is "fractal"- recursive or self-similar at various scales.

To me, this is an obvious assumption, since the whole of Reality is fractal in nature. However, this is not a widely recognized characteristic of our brain. The makeup of brain & its functioning expresses similar patterns & qualities as we observe the various scales from the molecular > neural > cortical columns > overall brain.

The ultimate goal of Wai Tsang's investigations is to be able to understand how the mind works so we can create a functional A.I., a truly thinking machine. The way to do this is through a holistic understanding of all the brain's processes, which give rise to the emergent phenomenon we call "consciousness".

Of course, the answer to "How does the brain work?" is the same as the answer to "How does the Earth work?" There is no simply way to sum up all the complex cellular, chemical, & energetic functions that are taking place within the brain at any one time. It is an intricate interplay of systems and components that cannot be teased apart as easily as traditional science would have us believe - with specific areas for language, vision, memory, emotion, etc. The workings of the brain are much more intertwined and distributed than could be described by any one theory. However, Wai Tsang in this book attempts to offer a key to unlock a more integrated picture of the human brain that could help understand it more thoroughly.

Although some of the more technical aspects of the book were a bit over my head, which focused on the mathematical & programming correlations to understanding the brain's functioning, I found the ideas presented intriguing. I think the fractal approach can be applied to many different areas of inquiry. Again, since the Universe exhibits fractal qualities, the aspects of it which we are trying to understand would also exhibit these qualities, true to fractal form. Especially the brain, which is a biological instrument used to perceive the fractal Universe, would then be expected to be organized in a fractal hierarchy.

The stated goal of the book, to discover a path to developing advanced A.I., is a controversial one. There are so many areas where artificial intelligence working on a level beyond the singular or collective capabilities of the human mind would be an unimaginable benefit. However, as a fan of sci-fi such as The Matrix, Horizon Zero Dawn, and Mass Effect, I'm also very wary if the dangers that advanced thinking machines could pose. The outcome of A.I. development will depend on humankind making the right choices in the process. Therefore, we are probably completely fucked.

So, I would recommend this if you are interested in the scientific study of the brain & consciousness, and are also interested in the elegant field of fractal geometry. It's not the easiest book to read at times, but it is thought-provoking and gets the fractal cascades of mental energy flowing through the cerebral cortex.